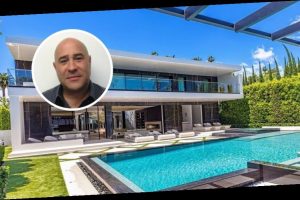 Pandemic-induced market slowdown means there are deals to be found on luxury real estate — for buyers that still have the means to pursue them, of course. In the desirable Beverly Hills Flats neighborhood, a mansion originally listed last summer at $45 million sold for $24 million last week, property records reveal, a nearly 50% discount but still one of the largest transactions recorded in the area over the last few months.

Somewhat surprisingly, the buyer is not a Hollywood mogul or high-profile CEO but rather local businessman Josh Solovy, a former Calabasas resident in his 50s who runs a large, L.A.-based manufacturing operation. Solovy and his business partner Erik Litmanovich operate Golden West Food Group, a major manufacturer and supplier of fresh and frozen food to the grocery and restaurant industries.

Built on speculation by developer Essam Ali, with design by Roman James, the contemporary structure carries all the latest tech wizardry, including a state-of-the-art security system, Lutron and Crestron smart home lighting and automation systems, and a Delos wellness system that optimizes indoor air and light quality.

Accented by mature palm trees, the home’s black-and-white façade is a blocky, lego-like bonanza that makes it look more akin to a Miami office building than a private L.A. home. Inside, custom finishes include a Fendi-branded kitchen, a soundproof home theater with space for 16, and a seven-car attached garage with a 58-foot wall animation, turntable, and surround sound — yes, even the automobiles enjoy five-star accommodations.

In addition to his lavish new Beverly Hills digs, records reveal Solovy maintains at least two other multimillion-dollar L.A. homes. Back in 2017, he paid $11.6 million for a contemporary mansion sited directly above the iconic Sunset Strip; earlier this year, he spent another $3.3 million on a contemporary home in the centrally-located Fairfax District.