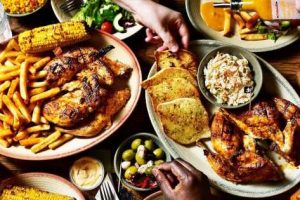 A former Nando's employee dished the dirt on how staff would get customers to spend more while visiting the restaurant.

An ex-worker spoke to the Express about how they develop a rapport with punters.

They cheekily admitted: "When I was at the till we had to ask questions that seemed like you were just being nice with customers. But they were actually to make you buy more."

You may be wondering what the secret trick was – well, it's all about offering the olives to customers, which come in at £3.75 per portion.

The former employee continued: "Like I had to casually say: 'Do you fancy some olives while you wait for the food to come out?'"

It was also alleged that employees always have to ask "Is that it?" or "anything else?" before completing the order.

By doing this customers are said to be more likely to add things to the order as they'll pay all in one go.

Even though the trick didn't work every single time, the former employee said most people would opt to add them to the bill, and it was also a technique used when people ordered drinks too.

If you're a regular at Nando's, you should know by now that you have access to unlimited refills on soft drinks, but you can't bag a top up on juices.

Due to this the employee said if someone ordered juice they'd always be asked if they wanted to add another drink to their order.

By doing this the customer would automatically cough up for cash for another glass.

They explained: "So basically when they finish drinking the juice, they could use that same one to have Coke.

"This way, they end up with two glasses, which is completely unnecessary."