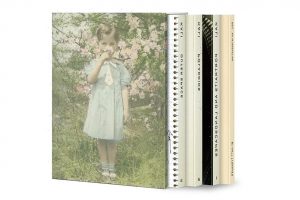 “She was a West L.A. mother on the surface who had a shockingly vibrant secret life as a prolific artist and photographer,” says journalist and documentarian Matt Tyrnauer, who wrote the introduction to “Kali,” a new four-volume collection of the artist’s work from powerHouse Books. “In fact, she was an innovator in the art of photography.”

Born in 1932, Joan Archi­bald — Kali was the name she used for her artwork — was a young mom on Long Island when she left her husband and two children in 1964 for Malibu and then Palm Springs, where her parents bought her a house that once belonged to Bobby Darin and Sandra Dee. She processed some of her photos in her pool as she swam in the water filled with ink and finishing agents. However, the work wasn’t discovered by her daughter, Susan, and Susan’s ex-husband, photographer Len Prince, until Kali’s death in 2019. “Except for one tiny, obscure gallery show very early in her career, she was never public about her art,” says Tyrnauer. “There’s so much mystery there. And the mystery is exacerbated by the fact that she never seemed to talk about her work with anyone, even her daughter.”

Among the gems is a 1968 photo of Frank Sinatra (above) on a closed-circuit TV monitor at a Palm Springs restaurant and a shot of Richard Chamberlain posing with Kali on a beach in Malibu. “There’s something very California romantic about it,” Tyrnauer says. “It reminds me a lot of Joan Didion. It’s sort of like a contemporaneous visual record of that period Didion captured so well.”

The release of “Kali” coincides with an exhibit of her work at at Staley-Wise Gallery in New York City.

Kali appeared to have lived most of her life as a recluse. Her family didn’t hear from her for decades, until Susan received a call from a hospital that her mother was diagnosed with dementia. “When she was practicing, photography — certainly at the beginning of her career — was barely even considered an art form,” Tyrnauer says. “Yet she trademarked a term, ‘artography,’ which shows you that she thought of it as art before a lot of people did. In that way, she was ahead of her time.”