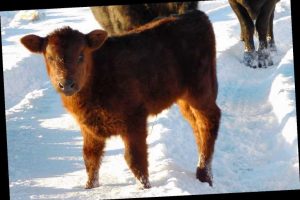 Ranchers across the Great Plains are struggling to keep their livestock alive as the unprecedented cold temperatures over the past week reap disastrous effects.

In Montana, they've been duct-taping calves' ears to their necks to stop them from falling off due to frostbite, Bloomberg reports.

In other states, like Oklahoma and Arkansas, newborn calves are freezing to death as ranchers desperately try to save them, using pantyhose to keep their heads warm and even sticking the most vulnerable animals in their cars and homes.

"It's survival of the fittest right now," Tyler Beaver, a founder of brokerage Beaf Cattle Co. in Arkansas, told Bloomberg. "Lot of hay having to be put out on a daily basis just to keep the cows warm enough to not freeze to death."

RELATED: Winter Storm Uri Has Left Texas in Crisis: Here's How You Can Help

Dale Murden, a cattle raiser in Harlingen, Texas told the outlet, "The whole state from the panhandle to the tip of Texas is just a mess."

The raging weather will not only kill some animals, it will also slow weight gain for most cattle. Lighter animals will translate to smaller supplies across the country later this year, according to Bloomberg.

Cattle aren't the only livestock on the brink of survival as sub-zero temperatures continue.

Countless broiler houses, where chickens are raised, are without power and some have even collapsed from being overwhelmed with snow and ice, according to Bloomberg.

Farmers said that other solutions, including hay for warmth and food, are being stalled by the diesel trucks that are not able to make deliveries in the icy environment.

FEMA and the USDA are offering assistance to farmers and ranchers, including emergency care for animals and financial assistance for those who raise them.

Texas governor Greg Abbott warned residents on Thursday — millions of whom are without clean drinking water and/or power — to brace for the freezing temperatures to continue at least through the weekend, according to the New York Times.

"We are not yet out of this, but we're closer to this challenge being behind us," he said. "We will not stop until normalcy is restored to your lives."