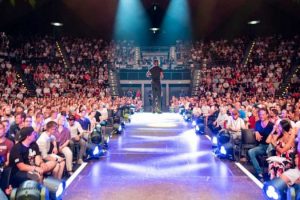 He was a basketball player with a promising future, but after a serious injury put him out of the game, German-born Thaddaeus Koroma switched paths and has become one of the go-to guys for investments and business opportunities for the rich and famous.

Koroma used the years of training, challenges on the court, and love for competition to create Limit Breakers, a networking firm to help build businesses and opportunities, with his partner and cousin, Patrick Sesay. The two are experts at digital marketing, building brands, and generating revenue for pro-athletes, musicians, actors and actresses, and other wealthy investors.

While he may not be famous, those that are, know who to contact when looking for the next big investment. He sits so below the radar, his net worth is thought to be somewhere between $1-5 million, but no number has been quoted officially.

How did Koroma take a failed promising career and create a life-changing business? It started years before even he knew of the possibilities.

For Love Of Game

Koroma played basketball for three years in Germany before, at 17-years-old, he moved to the United States on his own in search of a career in the game. Homeless yet persistent, Koroma moved in with a coach and continued to work on his craft.

He began by training with Keith Stevens at the AAU program Team Takeover and later led the Patterson Prep School to victory, defeating the likes of future NBA stars Brandon Jennings and Tyreke Evans. Patterson Prep became the number one prep school in the nation under Koroma’s leadership.

He believes he had what it takes to go pro, but a career-ending injury caused Koroma to take pause and reevaluate. Calling the experience a ‘painful emotional and physical struggle,’ according to Discover Germany, Koroma learned the value of working his spiritual and mental fitness in a way he hadn’t imagined. He reached out to mentors and learned everything he could about business, marketing, investments, the power of teams, and history.

Koroma began with public speaking and workshops, sharing everything he had learned about business investments and goal-oriented career moves. Known for his inspirational GO4IT business summit, an event he hosts four to five times per year all over the world, word began to spread, and it wasn’t long before thousands would buy tickets to the three-day event.

He began connecting with celebrities in private coaching sessions, teaching online sessions, and rubbing elbows with celebrities like Jamie Foxx and Usher. Koroma says if we (particularly athletes and other celebrities) spend most of our life working with coaches, staff, and experts, having a coach for finances, business moves, and self-improvement is a logical person to have on your team.

Not only is Koroma a team player, but he also focuses on networking and the benefits of knowing the right people for the right task. He’s often referred to his work as solving riddles and has become the man that connects new entrepreneurs with celebrities and wealthy clients that have the funds to invest.

Now, looking at the client’s resources and abilities, Koroma believes the equation is solvable – you just need the right connections.

Limit Breakers was built mainly around family members, according to Forbes, and they’ve watched their success continue to grow, depending upon those they trust the most. Koroma believes working together changes the mindset in which competition can bring others down but lifting each other lifts everyone involved.

RELATED: 10 Celebrity Businesses That Earn Them More Than The One They Are Famous For

Koroma now travels ten months per year, and while those trips are meant to foster growth and networking, education alone is priceless. He’s lived in South America, Africa, the Middle East, and Asia, allowing for new doors to open and meeting new and interesting people.

He’s often discussed the quality and success of his own mentors and believes mentoring others is sending everyone in the right direction.

He’s learned more about the world’s needs as well. Growing up in a poverty-stricken German village, Koroma has a heart for those less fortunate and has worked to improve the community around him. He wholeheartedly believes in the power of change and focusing on the future. He co-created Garden of Eden, non-profit supporting children in Uganda, Sierra Leone, Liberia, Asia, and other countries who have left large numbers of children as orphans.

Koroma also supports Tiffany Parsons’ Shine on Sierra Leone project, caring for children who have been orphaned by the 2006 Ebola virus.

The future, he hopes, is filled with inspiration, continued growth, and lessons, both good and bad, that keep us going.

READ NEXT: 5 Business Ventures Drake has Pursued Outside of Rap