Home » Lifestyle » From ‘no case’ to $1.2b settlement: How robo-debt scheme went so wrong

From ‘no case’ to $1.2b settlement: How robo-debt scheme went so wrong 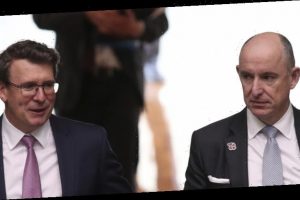 When the Morrison government was hauled into court to face a class action over its "robo-debt" scheme, Government Services Minister Stuart Robert branded it a political stunt.

"There's no case, there's no papers and there's no plaintiffs," Robert said in September last year. 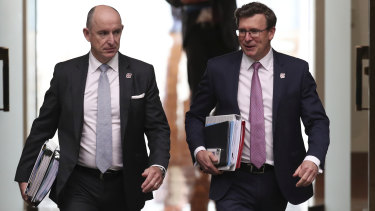 By Monday morning he had all three. A settlement agreed that day, just ahead of a scheduled two-week trial, will cost the government a total of $1.2 billion.

Gordon Legal, the plaintiffs' law firm, reckons the matter might be all done and dusted by the end of next year, though some class action members are unhappy with the settlement and plan to challenge it.

That would be six years after robo-debt first started in 2015, leaving behind the question of how a scheme the government insists it believed was lawful until last year could go on so long despite repeated warnings.

The intention behind robo-debt was simple: to pick up welfare overpayments more efficiently and save taxpayers' money. Our welfare system is not cheap. The Parliamentary Library estimated social security and welfare spending was $180.1 billion in 2019-20, or 36 per cent of all federal spending.

And robo-debt, formally known as the Online Compliance Intervention System, had early results that would have had any government salivating. Tests found almost 70 per cent of interventions resulted in a debt being found and those debts had an average value of $2546.21.

Traditional welfare payment reviews had an officer looking over records to try and pick up suspected underpayments, asking for payslips from Centrelink recipients, then requesting them from employers and finally using annual income data if none of that worked.

The new online system did the reverse.

It automatically took annual income data and averaged that over 26 fortnights, presuming income was the same across each.

If people earn above a fortnightly threshold, which depends on what welfare they are receiving, then the amount they are entitled to typically goes down, sometimes to nothing. 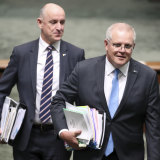 Scott Morrison and Stuart Robert. The Prime Minister apologised in Parliament for “any hurt or harm in the way that the Government has dealt with that issue”.Credit:Alex Ellinghausen

Nonetheless, the robo-debt system presumed that people with choppy incomes, perhaps because they had casual jobs to fit around study or "care" commitments actually earned steady, regular income.

As a result, it tended to suggest they were eligible for less money than they actually were. Welfare recipients then had to find evidence to dispute a debt that only existed on an erroneous calculation in the first place.

There were other problems too. Versions of robo-debt asked people to simply "confirm" their income, which people did because it was their actual average income without realising it would be used to determine fortnightly earnings and raise debts too.

The system also scoured through years of payments, far longer than people had been told to keep records to dispute the system's false claims.

If their contact details were out of date, the first some people heard they had an alleged welfare issue was when debt collectors knocked at their door.

The government did adjust robo-debt as feedback came in, especially a Commonwealth Ombudsman's report, and Robert has defended it on the basis the core technique of income-averaging was not new.

"The use of ATO averaged income data to determine eligibility for benefits goes back decades and decades, almost 30 years to the Hawke and Keating era," Robert said.

He said the Morrison government was the one cleaning up the scheme. "Unfortunately it's been a long standing practice," Robert said on Sky.

Government bungling, especially with IT systems, is not new. The COVIDSafe app has not lived up to expectations and the online census in 2016 crashed.

What makes robo-debt distinct is the number of warnings the government had. There was extensive media coverage, almost from the scheme's inception, including a prescient 2017 piece that memorably depicted the scheme as a massive robot Santa with a Centrelink logo as its maw. 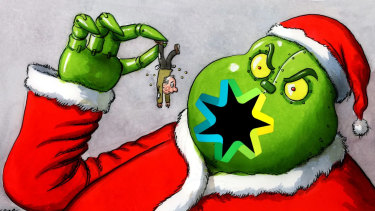 That year the Commonwealth Ombudsman issued a report that did not reject income averaging but came with heavy caveats about its use.

At the Administrative Appeals Tribunal, Gordon Legal said it found 76 decisions that found robo-debts were invalid.

University of Sydney Professor Terry Carney, a former AAT member who issued some of those decisions and is now a critic of the scheme, argues that the government's decision not to appeal at the AAT suggests it was aware of the scheme's failures.

(In the class action settlement, the government did not admit liability for robo-debt or that any of its staff were aware of the scheme's failings.)

The turning point came with a federal court case in 2019 where the government admitted the income-averaging method was unlawful. Labor and the Greens along with welfare groups led the fight against robo-debt.

This year, Morrison issued a mea culpa in parliament.

"I would apologise for any hurt or harm in the way that the Government has dealt with that issue and to anyone else who has found themselves in those situations," Morrison said.

Kobi Leins, an expert in digital ethics at the University of Melbourne, says robo-debt does not offer complex lessons about the use of AI in government because the scheme simply sped up what could have been a manual process.

It shows, she says, that technology is no excuse for disobeying the law.

"These systems can cause harm on such speed and such scale that complying with the law becomes even more important," Dr Leins says.