Home » Lifestyle » From the Archives, 1977: Exit Elvis, the king of rock dies

From the Archives, 1977: Exit Elvis, the king of rock dies 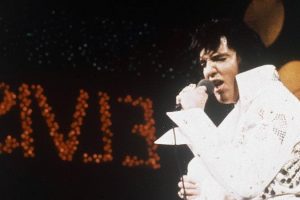 Exit Elvis, the king of rock

MEMPHIS (Tennessee), Aug. 17. — Hundreds of grief-stricken fans clustered around Elvis Presley’s Memphis mansion last night as two generations around the world mourned the death of the King of rock and roll. 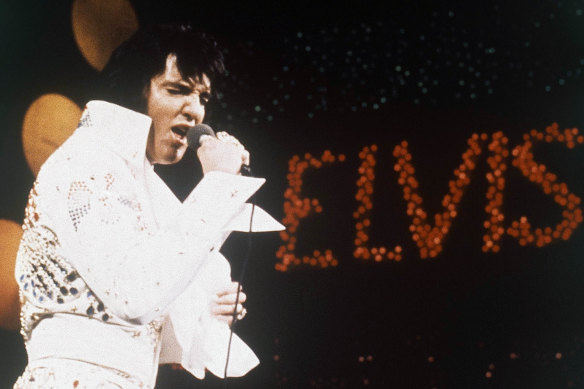 This 1972 file photo shows Elvis Presley during a performance.Credit:AP

Traffic was bumper-to-bumper along the tour-lane Presley Boulevard outside the I3-acre grounds surrounded by a three-metre brick wall.

Presley, 42, died of an “erratic heartbeat” inside the guarded 18-room residence Graceland, where he lived as a virtual hermit.

The body of the biggest-selling popular recording idol ever was found face down on the bathroom floor at 6.30 am Melbourne time yesterday.

But doctors said he could have died 5 ½ hours earlier.

He said the precise cause of death “may never be discovered″⁣. Presley suffered from high blood pressure and “some coronary artery disease.” 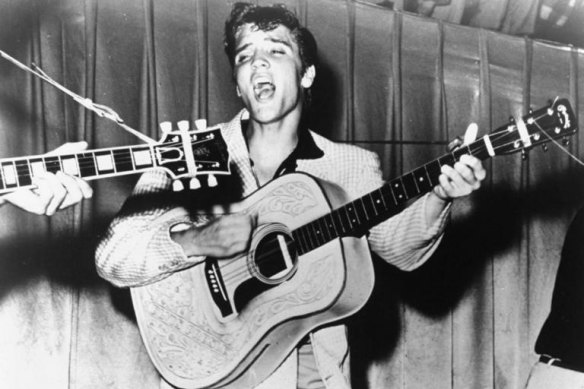 This 1956 photo of Elvis Presley performing was used for his first RCA Victor album cover.Credit:AP

Both Francisco and Dr George Nichopoulos, Presley’s personal physician, said no traces of drugs were found other than the medicine Presley was taking for hypertension and a colon problem.

“There was no indication of drug abuse at all.” Francisco said. “I was aware of the rumours and that is why I mention it.”

Only hours before Presley died his bodyguard for 16 years, Delbert Sonny West, said Presley was heavily addicted to drugs and haunted by fears, which drove him into seclusion.

In an interview, West said: “He was on pills all day long, and he would give himself shots in the arm or the leg with those little plastic syringes.

“His drug habit is so severe that I’m convinced he is in danger of losing his life.”

Tributes poured in from around the world for the poor cotton farmer’s son whose electric guitar, gyrating pelvis and sensuous voice became a rock’n’roll legend.

There will be a private funeral service at Graceland On Thursday, and Presley will he buried in a mausoleum at the Forest Hills cemetery where his mother is interred. Presley’s mother also died at 42.

Melbourne… she ain’t nothin’ but a town agog.

The death of Elvis Presley, the “King” of Rock, left most people all shook up rather than cryin’ all the time.

City record shops reported the greatest surge in buying of Elvis’ records for many years, and they swamped Elvis’ label, RCA, with demands for more stocks.

Coincidentally, RCA had nominated August as Elvis Presley Month and supplied stores with extra records. But, by evening, much was bought up.

Shop assistants said the buyers ranged from teenagers to people in their 80s, and it was the day’s dominating topic of conversation.

At Allans Music in Collins Street, one window was redecorated by 9.15 am with Elvis records and a big portrait poster, all draped with black ribbon.

Radio got into the act from the moment the news teleprinter announced the shock tragedy just before 7.30 am.

Fittingly, the news was preceded by a four-snap bell-ringing accolade which is usually reserved for the deaths of presidents or monarchs.

Stan Rofe, Melbourne’s 40-year-old “daddy” of the DJs, heard it over the air at the breakfast table… and stopped eating there and then.

“I just felt I didn’t want to go to work, but then I thought they would need me to help do a tribute,” he said.

Rofe ran the Elvis Presley Hour from 1957-68, first on 3KZ and then on 3UZ, and sees his life as being intertwined with Presley’s.

“Presley started me in rock’n’roll. He was an inspiration. Without Presley, I don’t think I would ever have been a disc jockey, and radio might have been very different today,” Rofe said.

Rofe spent all yesterday putting together spoken and musical tributes to his guiding light.

The one man in Melbourne who is more fanatical about Presley than Rofe is 27-year-old Wayne Hawthorne, president of the “King’s” fan club in Victoria since 1970.

A dedicated 1950s rocker, from his duck-tail hairstyle to his pointy shoes, Mr. Hawthorne’s reaction was “similar to what I felt when President Kennedy was assassinated… just disbelief”.

He said: “I was driving to work and I turned around to go home and listen to more radio reports. As we’re putting out an Elvis magazine, I thought if it was true I’d better get it out quickly.

“I’ve been an Elvis fanatic since I first saw a preview of the dance scene from Jailhouse Rock at a Melbourne cinema in 1957,” he said.

Although he never met Elvis, Mr. Hawthorne feels he has lost a close friend. He’s got Elvis’ signature on his engagement photo, and a Christmas card from Elvis dating back to the mid-1960s.

And, just last December, he saw Elvis giving an “absolutely fantastic” concert in San Francisco, his second performance after spending several months at a health spa.

He says the fan club, which has 2500 members, will keep functioning… but as a memorial club.

“We’ve got a big dance at Caulfield town hall on Friday night, and there’s going to be a minute’s silence,” he said.