Home » Lifestyle » From Utah to Uluru: a monolithic mangling of our language

From Utah to Uluru: a monolithic mangling of our language 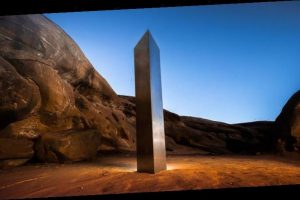 Remember the whole monolith thing? I know, don’t worry. Last November feels a lifetime ago, before the Avalon cluster, the Brisbane lockdown, the Capitol “coupfefe”. To freshen your memory, a steel slab appeared in a Utah canyon. 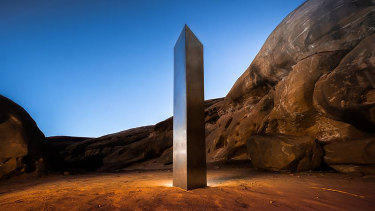 A monolith that was placed in a red-rock desert in an undisclosed location in San Juan County, south-eastern Utah, in November.Credit:AP

Like a squashed fridge, the mystery installation was three metres high and made little sense. Who did it? Why do it? Theories flew, ranging from aliens to a slow-burn ad campaign. This last idea firmed as more monoliths popped up, from a Gujarat forest to a Slovakian mall.

Melbourne comedy troupe Aunty Donna joined the bandwagon, devising their own December monolith in the Dandenongs. Much like fidget-spinning, or Pokemon Go, the craze was a spell of levity to lighten a difficult year. Though not everyone was amused.

For every new monolith emerging, a talkback purist was mourning the death of English. Can you guess their gripe? My opener gave you the hint, though maybe your etymological antennae are less twitchy. The issue can be summarised by steel versus stone.

Uluru, to be pedantic, is a monolith, literally one lump of rock, a la Cleopatra’s Needle on the Thames. Monos-lithos. Single-stone. Know your Greek, wailed the sticklers. “If we wish to discuss these enigmatic pop-ups, from Casablanca to Kurdistan, then please use other terms.” Obelisks, perhaps. Sculptures. Pillars. Or just plain pranks.

But to paraphrase Jesus, “Let he who is without semantic sin cast the first single-stone.” Since English is never as pure as Monolithuanians insist. Heaven forbid. That would be terrific, to use the adjective as first intended by poet John Milton in 1667. Back then, terrific meant horrifying, the serpent of Paradise Lost described as “Of huge extent, with brazen eyes and hairy main terrific.”

The quote tells us two things. One, mane was spelt main 350 years ago. And two, Milton was no zoologist. While words will change their stripes over time, snakes were never hairy. Not then, not now, not ever. As for terrific, its striking essence had evolved from fearful to delightful by the late 1800s, no doubt drawing a tut-tut chorus of the day, just as monolith has done this time round.

Quarantine has taught us how promiscuous English can be, the word drifting loose of its Venetian roots. On advice, people in recent contact with COVID-19 cases are spending 14 days in isolation. Pedants, on the other hand, will spend 40 days out of the loop, assuming they remain true to quarantine’s Italian backstory.

Nobody’s doing that, of course. All of us can see how etymology, like epidemiology, shifts with the ages. No doctor is embedding their patient into a whale carcass as a cure for rheumatism, as history once advised. Nor is any purist demanding that manure can only be called manure if it’s been worked by human hand, as its etymology declares. Coz that would be some crazy shit. 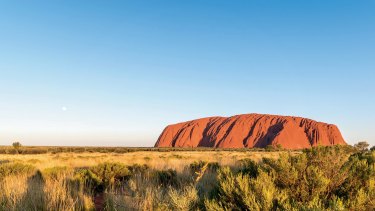 Uluru is a monolith. The steel structures popping up around the globe? Not so much.

When we arrive, we don’t need to “arripare” – or literally come to shore, as per its vulgar Latin. We just lob, like a monolith. While it’s true that that Utah upright wasn’t stony, the monolith tag stuck, as that’s how the game of English is played, finding new ways to use old words.

More than a thief, stealing words from every country, English is a terrific improviser, adapting whatever prop it holds. Last time I checked, powdered antimony (al-kuhl) is not integral to alcohol, but that doesn’t stop the word being adopted, and adapted, from AA to alcopop. It’s how language works, or our own hairy monster at least, prancing the forum from Utah to Uluru, breaking every pedantic heart along the way.