It would be a rare state funeral service that was live-streamed into Victoria’s prisons, remand centres and youth justice centres, but Uncle Jack Charles was not your usual recipient of the full state send-off.

The Boon Wurrung, Dja Dja Wurrung, Woiwurrung and Taungurung elder had suffered his own long experience on the wrong side of the justice system and emerged to tell the tale, later doing vital work with young people caught in the system. 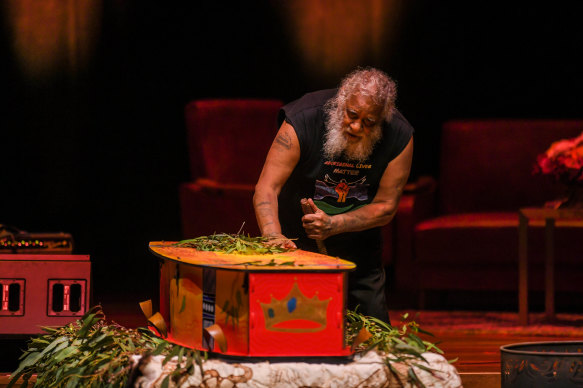 But at an emotional service in front of a capacity crowd in Melbourne’s Hamer Hall, the life and achievements of the actor, artist and community activist were celebrated with as much humour as there were tears, as was his connection to culture and advocacy for First Peoples and LGBTQ communities.

As an infant, Charles was forcibly removed from his mother by state authorities and then put into the Box Hill Boys’ Home at the age of two. As he told the Yoorrook Justice Commission in April, he had been subject to “cruel and callous punishments” at the home in the 1950s – experiences that were followed by cycles of incarceration, homelessness, familial dislocation and drug addiction.

Stepping in for Victorian Premier Daniel Andrews, who had been called away to the flood crisis in the state’s north, Acting Minister for Treaty and First Peoples Colin Brooks told the service that Charles had been “a leading light” for truth telling as a member of the Stolen Generations.

“In spite of his hardship and the absence of love so early in his life, Uncle Jack dedicated his life to sharing his love and inspiring others. We were always better off for hearing the wisdom of his words,” Brooks said. 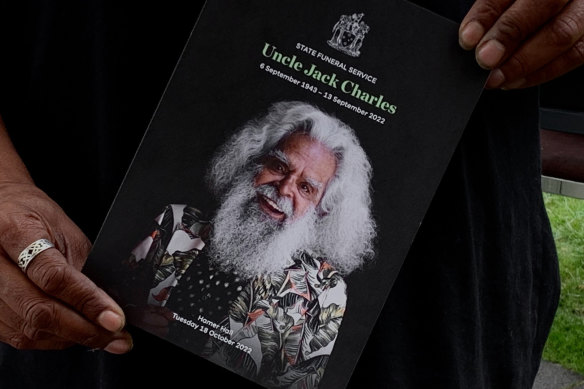 The order of service.Credit:Justin McManus

Charles’ niece Ajia Jacklyn Charles-Hamilton, speaking on behalf of the family, said he had been devoted to family and was an eternal optimist who “dedicated all his time to uplifting and strengthening us”.

“It was impossible to share a space with Uncle Jack without getting caught up in the twinkle in his eye.”

Maza recalled her experience of growing up around Charles after he and her father Bob Maza founded the Nindethana Theatre – Australia’s first Aboriginal theatre company – in 1971.

“I loved his cheeky humour, his passion. I loved his graciousness, his phenomenal talent, his consummate professionalism, his generosity with everyone and anyone. Not a judgemental bone in his body … his genuine joy of life. And this was his gift to us all, his example,” Maza said.

Courtin-Wilson told of the close friendship he shared with Charles, which developed over the seven-year period he filmed a documentary centred on his life, describing his stories as “full of magic”.

“Uncle Jack really listened. He gave people space to be themselves. He met them on their terms in a way that afforded them a unique dignity. The way he would encourage someone was remarkable. The way he lent into every social interaction and saw light and dignity in everyone around him was deeply inspiring,” Courtin-Wilson said. 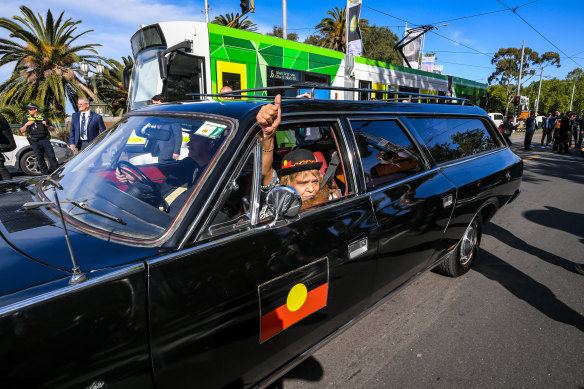 The service commenced at midday with a welcome to country outside of Hamer Hall, followed by a smoking ceremony and traditional songs and dances performed by the Murrundaya Yepengna Dancers, Djirri Djirri Dancers, Koorie Youth Will Shake Spears before a crowd of about 2500 people that filled the venue’s main theatre.

In 2009, Charles was awarded the Tudawali Award, honouring his lifetime contribution to Indigenous media. He was the recipient of a Green Room Lifetime Achievement Award 2014, was named Victorian Senior Australian of the Year 2016, won the Red Ochre Award in 2019, and was named NAIDOC Male Elder of the Year in 2022.

Following the service, a funeral cortege of Harley-Davidsons led Charles’ casket up Swanston Street and past the Town Hall.