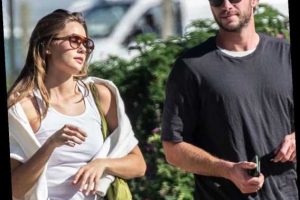 Liam Hemsworth's girlfriend Gabriella Brooks made an appearance in a big group photo with the rest of the Hemsworth brothers and their wives.

Daisy and Gatsby, is that you? Liam Hemsworth and girlfriend Gabriella Brooks looked extra cozy as they transported from 2020 to 1920.

On Nov. 7, Chris Hemsworth shared a photo of his family dressed to the nines in Roaring '20s attire to celebrate brother Luke Hemsworth's 40th birthday.

In addition to Craig and Leonie Hemsworth, the brothers' parents, Chris' wife Elsa Pataky, Luke's wife Samantha Hemsworth and Liam's girlfriend Gabriella were in attendance. The Hunger Games alum and his model girlfriend looked particularly cozy in the group shot, as Liam pulled Gabriella in tight for the pic.

Chris wrote in the caption of the pics, "Happy 40th birthday @hemsworthluke you big legend !!"

Samantha also shared pics from the festivities on Instagram, writing, "My favourite person in the world @hemsworthluke plus a couple of other bloody legends." Gabriella can be seen in the photos wearing a black flapper-style dress, sans Liam.

Liam and Gabriella have been together for nearly a year. The couple was initially spotted kissing on the beach in January in Byron Bay, Australia. Soon after, they were seen getting lunch with Liam's parents.

Liam's relationship with Gabriella comes shortly after his divorce from ex-wife Miley Cyrus, whom he wed in December 2018 after a decade-long on-off romance. They split in August 2019, less than a year after they tied the knot in a private ceremony in California.

How Mom Wrote Off Anna Faris

Chris Hemsworth Didn't Allow His Trainer to Join The Bachelor

One thing that connects Gabriella and Liam is their love for their shared home country of Australia, a source told E! News in March. "She wants to be in Australia just as much as he does and they both really enjoy being there and spending time with family and friends."

Fortunately, it seems like Gabriella fits right in with Liam's very Aussie family!

END_OF_DOCUMENT_TOKEN_TO_BE_REPLACED

END_OF_DOCUMENT_TOKEN_TO_BE_REPLACED
We and our partners use cookies on this site to improve our service, perform analytics, personalize advertising, measure advertising performance, and remember website preferences.Ok