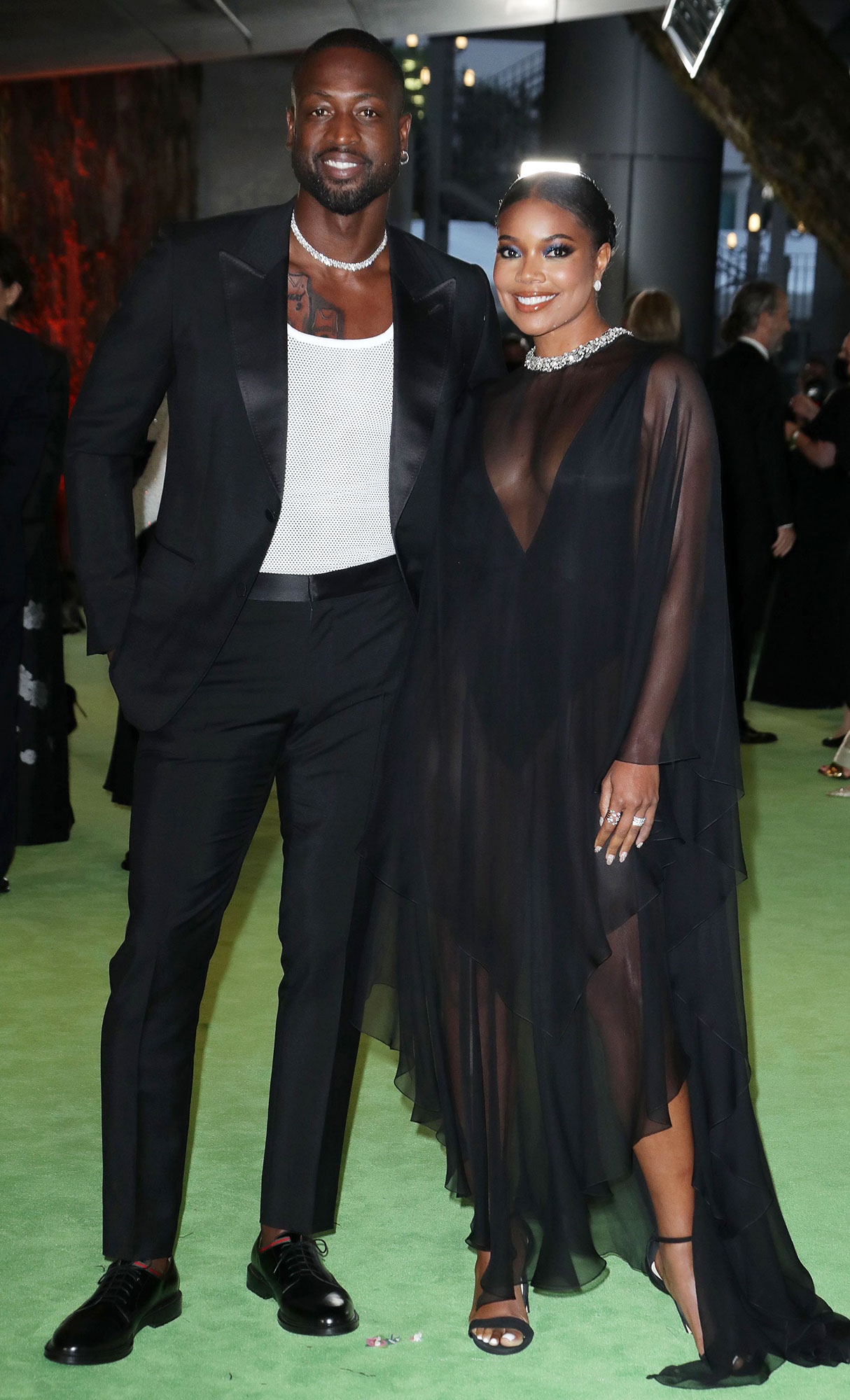 Called out! From his neon suits to shirtless escapades, Dwyane Wade has quite the individual style. He does his thing by and large, but there have been a handful of times when wife Gabrielle Union has had to play fashion police.

Gabrielle Union and Dwyane Wade: A Look at Their Romance

While the 48-year-old actress is all for her husband’s “snazzy” style and pretty much let’s him do his thing, she has spoken up a time or two when his pants were just a bit too revealing.

“He likes schmedium,” she joked about her husband’s pants preference on a Wednesday, September 28, episode of Jimmy Kimmel Live!. “He’s probably like a large, extra large, but he likes a schmedium. He likes slim fit.”

But sizing down, while a trendy move, can have some, erm, side effects. “And the thing about a slim fit pant [is] if you are a blessed person, a blessed gentleman — I was like, ‘Uh, there’s a lot of information there with that slim fit, with that particular cut. I could see your heartbeat,’” Union joked to Jimmy Kimmel.

When the pants are too “revealing,” the Bring It On star explained that she will give her hubby a “heads up that it could be a problem.” Even after throwing her two cents into the mix though, Wade “rarely listens” to her.

And he has the Instagram comments to deal with as a result. “He’s like, ‘What is the eggplant emoji and why is that in my comments?’” Union laughed to the talk show host.

While the athlete didn’t originally know the meaning of the symbol, the actress insists that she’s given him a bit of a crash course on its significance. “I think it’s the goal. I think it’s the goal to have his comments section filled with eggplant,” she joked.

Pants aside, Union normally gives her stamp of approval on her husband’s wardrobe. In fact, she was particularly a fan of his “shirtless summer,” in which he wore tuxedos and suits sans a shirt.

“I don’t often chime in about his fashion choices, but I was here for this,” she revealed. Wade embraced the look during the couple’s most recent trip, which was dubbed the #wadesworldtour. The duo traveled for weeks, hitting Sardinia, Capri, Monaco and more.

The trip overlapped with their seventh anniversary, which they celebrated in Paris. “From our family to yours, thank you to everyone who wished us a Happy Anniversary,” Wade captioned an August Instagram post. “Celebrating our 7th year anniversary in Paris with family and friends was dream come true. We wanna thank everyone who took the time to come and share our family’s love…”