The Generation star opens up about his character’s questionable choices, and providing an authentic portrayal of teen life on TV. 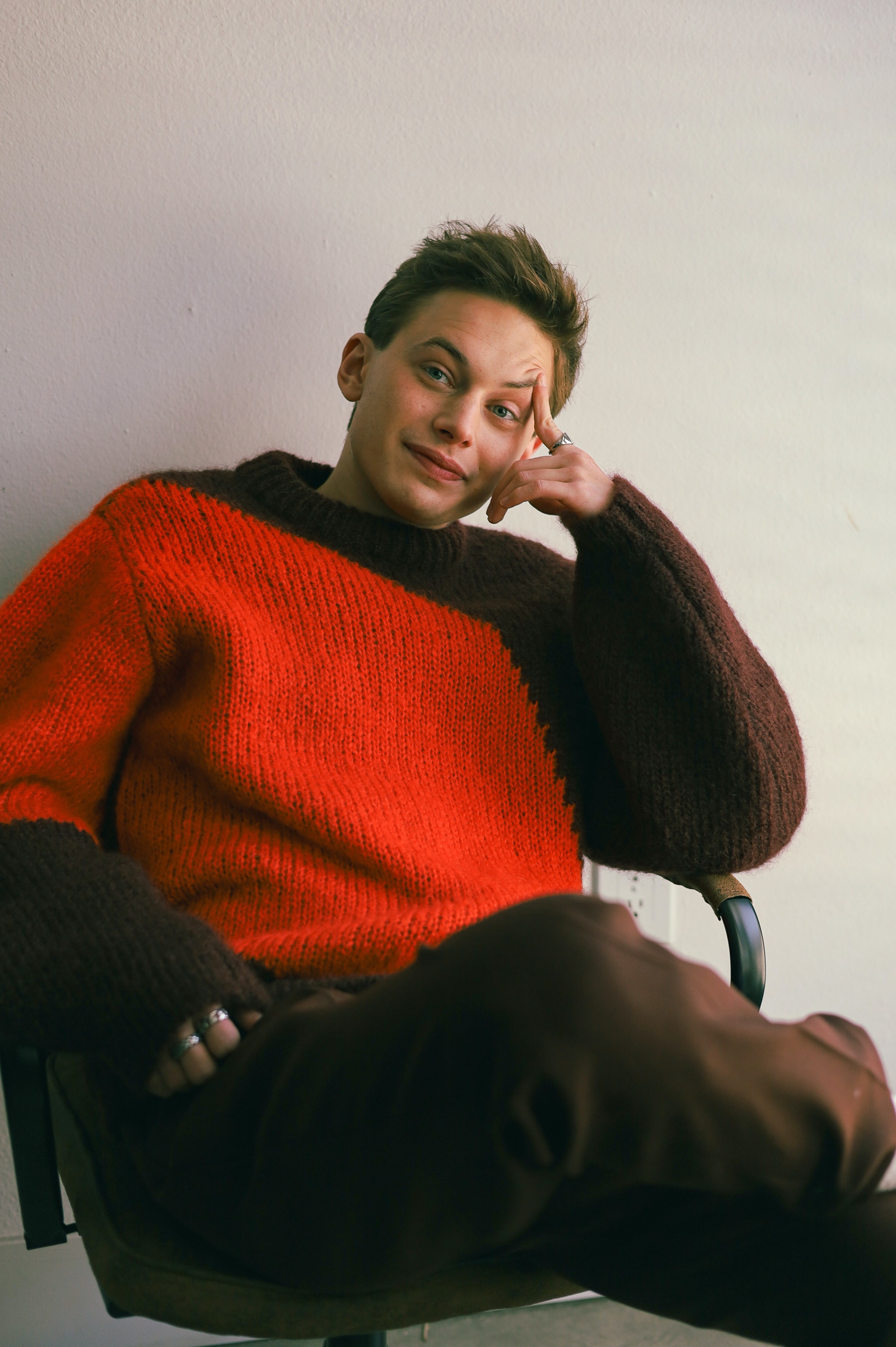 There are only two things that Uly Schlesinger will say he is good at: acting and pool. Before the 24-year-old moved out to Los Angeles for his role on HBO Max’s Generation, every day he would go to a dive bar near his Bushwick apartment to shoot pool against the brood of 40-year-old men that also enjoyed the cue sport. For Schlesinger, billiards is a form of meditation that allows him to decompress after a long day at work and do nothing but focus on sinking balls into a pocket. So, when he left New York, the one thing he made sure to buy for his new home in L.A. was a pool table. It’s a fixture that remained clearly visible behind him throughout our Zoom call, during which he sips on his typical Starbucks drink order: a venti iced vanilla latte with a third decaf.

Schlesinger stars as Nathan in the stylish HBO Max series about a group of teenagers living in California’s Orange County while navigating identity, sexuality, and the existential crises of Gen Zers. His character is a neurotic, nervous mess making questionable choices most of the time, whether that involves coming out as bisexual during a speech at a wedding party or engaging in oral sex with his twin sister’s boyfriend only to have the experience backfire in his eye. Then there’s the three-way kiss between Nathan, his girlfriend, and the guy that he’s been crushing on for months. And all of that takes place in just the first half of season one, with the second half coming out June 17.

"It’s really important that we have real bisexual representation, that’s something that really struck me about Nathan. He was so unsure of everything else in his life except for this part,” Schlesinger said. “That is always the confusing thing in a character story, their sexuality. It’s always like ‘Oh, I don’t know. Am I? Aren’t I?’ It is a common experience and totally normal and good to see, but it’s also so important to see someone who’s so young and sure of that part of themselves.”

Nathan’s conviction in being horny for both guys and girls is what helps make the series so refreshing to watch. Created by 19-year-old Zelda Barnz and her father Daniel Barnz, Generation isn’t just your typical teen show that rehashes the tropes of jocks, prom, and drama. It’s a preposterous yet candid telling of what today’s young people are going through. With audacious one-liners and brassy storylines, the series is unafraid to show the awful decisions and mistakes these young people make, like the aforementioned optical bombardment. On top of all that, its main cast consists mostly of characters that are queer in one way or another. In Generation, their sexuality informs who they are as people, but does not completely define them.

When Schlesinger was cast as Nathan, he reveled in the character’s rather messy introduction on the show. “It shows that there’s no monolithic queer experience. There’s all this nuance,” he said. “You’re just watching a TV show. It doesn’t have to be a queer TV show, it doesn’t have to be a teen TV show. It’s just a show, and you’re watching these normal people going through their lives. There’s ebbs and flows and there’s ups and downs. They’re real people who can be fucking shitty sometimes, and you don’t have to portray these people as inherently something—just show the authentic experience.”

Schlesinger originally grew up in Rhode Island, where he accidentally fell into acting. During high school he had to fill an arts requirement and photography, the only class he really wanted to take, was all filled up. He ended up in a theater class, but never thought too much about it. After someone dropped out of the school’s production of Antigone, he took over the role of “soldier number two,” a part with two lines. Completely unnerved during rehearsals, the stage fright hit Schlesinger backstage just before he was supposed to go on. Then it all clicked. “The feeling of being on stage in front of all those people and playing pretend, it was so magical to me,” he reflected. “It was so special to me that I just want to keep doing this.”

The young actor went on to attend the New School in Manhattan for three years until he dropped out his junior year. He couldn’t afford college anymore and decided he wanted to throw himself into the real world, fully anticipating juggling jobs and doing community theater on the side until his big break. After a few months of working at the Union Square Barnes and Noble, Schlesinger decided he needed to make moves toward finding an agent. He duct-taped his phone to a tripod and recorded himself doing a monologue from Polaroid Stories by Naomi Iizuka, a play inspired by Ovid’s Metamorphoses told through the perspective of queer homeless youth. Then he Googled “top 10 agencies in New York City” and cold emailed the video to all of them. His current agent just so happened to randomly click on his meeting, brought him in for an audition, and signed him for TV and film, which Schlesinger described as “a fucking miracle.”

That initial signing is not the only “miracle” the actor said he’s experienced with regard to his craft in the last few years. Schlesinger put together a self-tape back in 2019 for Generation, and thought he did so poorly that there was no chance he’d hear back. He was on a lunch break when he got the callback, then eventually got the final call from his agent while on the subway back to Brooklyn, who told him he needed to be on a plane to Los Angeles to shoot the pilot the next day. The news left him sobbing on the L train.

Beyond a handful of other small television credits, Generation has become his biggest acting project and learning experience for Schlesinger, and playing Nathan has given the performer the freedom to intimately embrace a character.

“I’ve never worked on something this long and getting to explore a character for seven months is your own little masterclass,” he said. “In terms of Nathan, he’s honestly so sweet and vulnerable and empathetic. I was thinking the other day, ‘I want to carry that with me.’ There’s a certain innocence and sweetness to him.”

As for what he can tease when it comes to the second half of Genera+ion’s first season, he stayed mum about details, but hinted at a lot of “juicy triangles” to come. And three-way kisses?