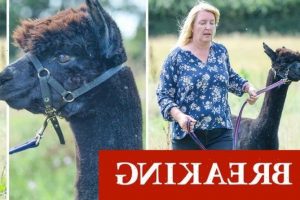 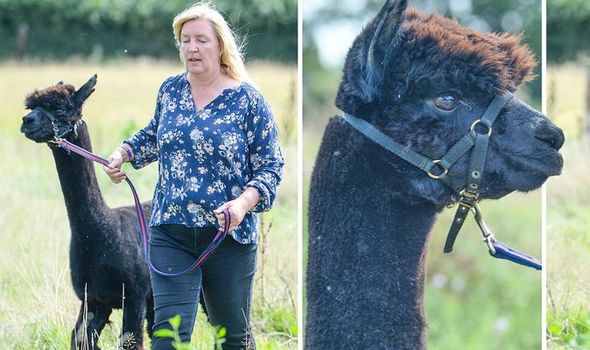 Police descended on Geromimo’s farm in South Gloucestershire at around 10.30am today. Officials arrived with a massive horse-box style animal carrier and photos show them tying rope around the alpaca.

A spokesperson for Avon and Somerset Police said: “We can confirm officers are in attendance at a farm in the Wickwar area of South Gloucestershire this morning to support the Animal and Plant Health Agency, who are executing a court warrant.

“We will always support our partner agencies to carry out their lawful duties, and our role is to prevent a breach of the peace and to ensure public safety is protected.”

Geronimo has been on a death sentence for months after testing positive for TB four years ago.

The eight-year-old alpaca had tested negative for TB in New Zealand but then twice tested positive for the disease on arrival in England.

Owner Helen Macdonald argues the testing is flawed because Geronimo is healthy. She believes the results are false positives because Geronimo had been primed with injections of TB before being tested.

However, the Department for Environment, Food & Rural Affairs (Defra) clarify that the injection of TB does not induce a false positive and rather amplifies the antibodies already induced by an existing infection.

Ms Macdonald, who runs the farm with 80 alpacas, wants Geronimo to be tested again or for authorities to let him live to aid research into the disease.

Defra was granted a warrant to euthanise the alpaca within 30 days from August 5, so Geronimo’s death could happen any day now.

A spokesperson for Defra said: “We are sympathetic to Ms Macdonald’s situation – just as we are with everyone with animals affected by this terrible disease.

“While nobody wants to cull animals, we need to do everything we can tackle this disease to stop it spreading and to protect the livelihoods of those affected.”