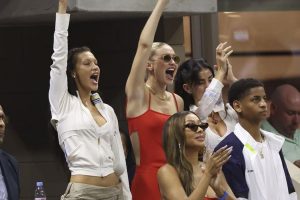 The US Open got a front-row seat to Bella and Gigi Hadid’s contrasting styles during their rare dual appearance on Monday.

The Hadid sisters were spotted heading out last night to watch the US Open, accompanied by friends and Bella’s boyfriend Marc Kalman.

Gigi and Bella Hadid’s relationship is as close as sisters could be, but they couldn’t be more different when it comes to style. Our Depop queen always pushes the boundaries with her looks, styling unexpected pieces together and always throwing her favorite Y2K aesthetic in the mix. Her big sister goes for a more modern look and is a bit more trend-focused. Well, the contrast has never been more on display than when the duo attended the US Open together on Wednesday night.

Gigi took a more colorful route, wearing a vibrant all-red set by Simon Miller. She finished the monochromatic look with a pair of Nike Air Jordan 2 sneakers in white and red, as well as yellow Tejesta sunglasses and a red Louis Vuitton clutch.

They attended the US Open on Monday, rooting on Williams as she clinched another win in the tournament. Bella also attended the tennis star’s first match on Saturday, so there’s a chance that the model will be supporting her friend throughout the tournament. The sisters have been friends with Williams for years and often attend her matches in New York City—so it makes sense that they would be there for what may very well be the last Grand Slam of her illustrious career.

The Hadid sisters were photographed animatedly watching the match between Serena Williams and Anett Kontaveit, with Serena winning 7-6 (4), 2-6, 6-2.

According to Harper’s BAZAAR, Gigi previously opened up about the dynamic between her and her family for the August 2021 cover story.

Gigi stated, “This is not to say that I don’t have a heart or Bella doesn’t have a brain, but when dealing with family stuff and world issues, my mom calls me the brain and Bella the heart,” she said. “My brother is half and half. Whatever the family dinner-table discussion is, Bella will be very emotional and compassionate, and I’m sitting there pulling up charts and infographics, speaking very calmly. My mom is just very Dutch and to the point. And my dad’s a storyteller—a bit goofy, but always connecting it back to, ‘Oh, you’ve heard the old Palestinian saying …'”

READ NEXT: The Kardashian-Jenner Family Surrounded By The Paparazzi At Kylie Cosmetics LA Launch Event