GREGGS' sausage roll took the country by storm – and now Ginsters is hoping to do the same with a new vegan pasty.

The snack maker's new treat contains a mix of vegetables and the pastry is made without any eggs or dairy. 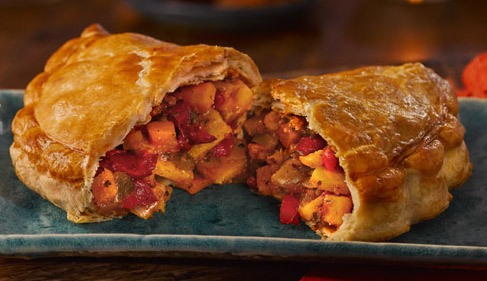 It goes on sale next Monday in Tesco, Asda and Morrisons for £1.60.

It will be seasoned with harissa and cumin, paprika and cayenne chermoula paste.

Ginsters is hoping its new creation will boost business as Greggs' vegan sausage roll has done for the bakery giant.

Sales at Greggs have now topped £1billion a year.

Ginsters is famous for its meat products, from Cornish pasties to sausage rolls.

It's the first time in its 52-year history it's created a vegan treat.

It was made in collaboration with Cornish Michelin star chef Chris Eden.

The pasty will replace the existing Moroccan Vegetable Pasty, which isn't vegan-friendly.

A Ginsters spokesman said: "This recipe reinvention marks Ginsters’ first step into the vegan market and reflects the enormous surge in popularity of veganism in the UK."

Subway recently changed its garlic mayo recipe forever to make it vegan as it launches a new plant-based sub.

Meanwhile, you can pick up a free spicy veggie wrap from McDonald's until tomorrow.

And Tesco has also launched vegan sausage rolls to rival Greggs – and they're cheaper.