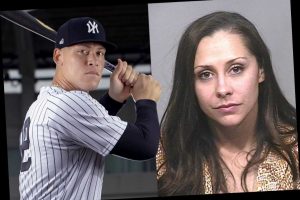 During Major League Baseball’s spring training, from mid-February until early April, the Phoenix area is a hotbed of activity as fifteen teams converge on the sprawling desert city.

The center of the nighttime action is Mastros Steakhouse in Scottsdale, where a New York Strip will cost you $71 but also gain you a peek into the buzziest baseball scene one can imagine.

“It draws everyone,” one local told The Post. “Coaches, agents, players and groupies, they are all there.”

Add to that list the significant others of a major Yankees player and Bronx Bombers’ executive, even though the New York team’s spring training is taking place on the other side of the country, in Tampa, Fla.

Back in February, Samantha Brackseick, the 26-year-old girlfriend of Yankees slugger Aaron Judge, enjoyed dinner at the pricey chophouse, reportedly with Sadye Zillo, wife of the Yanks’ head of communications Jason Zillo. (The Zillos did not respond to requests for comment.)

But their girls’ night turned into a big problem for Bracksieck. At 11:50 p.m., she was pulled over by Scottsdale police because the headlights of her 2017 Honda HR-V were off, and she was traveling 10 mph over the speed limit.

When officers approached the car, they later reported, Bracksieck smelled like booze, and couldn’t name the cross streets near her apartment, despite having moved to Arizona in July 2019. She told police that she had split four glasses of wine with a friend.

“I could smell a strong odor of an intoxicating beverage coming from inside the vehicle and from her breath as she spoke,” one wrote in the incident report, adding that Bracksieck was slurring her words and had bloodshot eyes. She was charged with “extreme DUI” for an alleged blood alcohol concentration level between .15 and .19.

The arrest remained under wraps until May, when it was reported by the website sportsgossip.com. The timing couldn’t have been worse. Under normal conditions, baseball box scores and early season heroics would be grabbing headlines. Instead, Bracksieck’s foul emerged during the coronavirus quarantine.

In the absence of any real sports news, the arrest boomeranged around the Internet — a nightmare, sources said, for Judge. Despite being one of the Big Apple’s most blockbuster sports names of the moment, the 28-year-old player is said to deeply value his privacy even more than the notoriously press-shy Derek Jeter.

“Jeter was private but didn’t mind his name being out there. He was showboat private,” said an insider. “Aaron is the total opposite. He is quiet quiet. The arrest had to be a gut punch to him.”

Then it got worse. A few days later, police body-cam footage from the arrest was leaked and revealed that the brunette had dropped her famous boyfriend’s name, asking, “Do you know who my boyfriend is? . . . My boyfriend is in the spotlight in New York media in general. And now here I am handcuffed in Arizona . . . Like, that is not good.”

‘The arrest had to be a gut punch to him.’

She finally told the officer that her boyfriend “plays baseball for the Yankees” before using Judge’s name.

Bracksieck was right. It was not good. It was also an unfortunate limelight introduction for the 5-foot-3-inch Bracksiack, who has been dating Judge — 16 inches taller than her — on and off since high school.

Up until that point, Bracksieck had remained relatively out of the Yankees’ spotlight, save for a handful of appearances at charity events.

In October, she watched game three of the American League Division Series with IMG model Chase Carter, who was dating Yankee Giancarlo Stanton at the time. Bracksiack and Judge attended his teammate CC Sabathia’s charity gala in September, visited cancer-stricken kids at Fresno’s Valley Children’s Hospital in November and, in early February, the couple were in Miami to watch the Super Bowl.

So who is the woman that stole the heart of New York City’s most desirable bachelor?

“She is a sweet girl. She’s really amazing,” the insider told The Post of Bracksieck. “I don’t think of her as this super-loud girl who says, ‘I date Aaron Judge.’”

The high-school sweethearts met as kids in Linden, Calif., a tight-knit farming community about 90 miles east of San Francisco. It’s a Norman Rockwell kind of place, with a small downtown strip and an annual cherry festival. The local pizzeria, Pizza Plus, is a shrine to hometown hero Judge and decked out in his memorabilia.

At Linden High School, where the couple started dating, Judge was a star of the baseball, football and basketball teams, while Bracksieck reportedly played varsity soccer and basketball.

Rather than part ways after high school, Bracksieck followed Judge, who is a year ahead of her, to nearby Fresno State University in 2011.

According to her former professor and advisor, Bracksieck, who earned undergrad and graduate degrees in exercise science from the school, is an aspiring college professor with an independent streak.

“She’s very bright,” Dr. Mark Baldis told The Post. “She’s very down to earth. There is no pretense about her at all. She is a really great kid.”

“Knowing Sam all these years, she is not one to drop his name,” Baldis told The Post. “She can get nervous. Knowing Sam, she wasn’t trying to get out of anything. I am willing to bet she’s just devastated over it. She’s a really humble kid.”

The professor in the kinesiology department said that Bracksieck never flaunted her relationship with Judge, who was a big man on campus and a star baseball player at Fresno State before being selected by the Yankees in the first round of the 2013 draft.

“About two years into [her schooling], she mentioned that she was dating Aaron. I can’t even remember how it came up,” said Baldis, adding that Bracksieck once brought Judge by his office for a chat before he decamped for the minor leagues.

As Judge’s career began to take off, with farm-league stints in Charleston, Tampa, Trenton and Scranton, the distance seemed to wear on the couple, who split in 2016.

That August, Judge made his Bronx debut in pinstripes, hitting a home run against the Tampa Bay Rays during his first at-bat in the big leagues.

Though the couple was no longer together, baseball continued to loom large in Bracksieck’s life. In 2017, she was recognized by Fresno State for an “outstanding master’s degree project” entitled “Posterior Elbow Angle During the Movement Phase of Throwing in Relation to the Susceptibility of UCL Injury in Major League Baseball Players.”

According to Baldis, his star pupil moved to Gainesville, Fla., to earn her doctorate in exercise physiology at the University of Florida, but never finished.

“The program wasn’t a good fit for her. It was too research-oriented,” he said. “She is a really good student and has a great work ethic, but she was more interested in teaching at the college level, not so much into research.”

Meanwhile, about 1,000 miles up the East Coast, Judge had won the American League Rookie of the year in 2017 and was just getting a taste of the spoils that come with being a superstar athlete in Gotham. But unlike his forebears Jeter and Matt Harvey, he didn’t go for big-name models or actresses.

In 2017, Judge started dating Jen Flaum, a media strategist originally from Franklin Lakes, NJ. After being spotted at the US Open that September, they made their relationship “Instagram official” the next month, with Judge dressing up as Superman and Flaum as Lois Lane for Halloween.

But he ultimately couldn’t stay away from his old love. Bracksieck reentered the Judge’s chambers in early 2019, and the two were spotted at the Fanatics Super Bowl party together.

According to reports, she accompanied him to London last June when the Yankees played a series against the Boston Red Sox. Cementing her place as an official MLB WAG (wives and girlfriends) was a photo of Bracksieck hanging out with the other Yankees wives, including first baseman Luke Voit’s wife, Tori, and Nicole Holder, spouse of pitcher Jonathan Holder.

The couple decided to give long-distance love another shot. Bracksieck left Florida, Baldis said, and landed a job at Exos, a massive training facility in Phoenix where many top athletes train. At that point, she refused to let Judge’s name affect her career path.

“She called me and we discussed the job. I said, ‘You ought to casually let them know that you’re dating Aaron, because that’s where the pros go.’ She said, ‘No I don’t want to do that,’” Baldis recalled. “She has said, ‘I don’t care about his money, and I have things that I would like to do myself. And I need to see that through.’”

The question is: Will Judge, whose 2020 contract is worth $8.5 million, stand by Bracksieck as she sees through the next phase of her legal issue? She is due back in court on June 29 and will likely not be able to avoid at least some jail time.

“The Arizona DUI laws are, by far, the toughest in the nation when it comes to sentencing,” Scottsdale defense attorney Craig Rosenstein tells The Post. (Rosenstein does not represent Bracksieck).

“With an extreme DUI, it comes with a mandatory minimum of 30 days in jail. But there is some sentencing mitigation that can happen, and the judge can shave it down to nine days.”

In order to get a reduced sentence, Rosenstein said the defendant needs to use an interlock device or a breathalyzer machine in their car and mandatory screenings and classes. Bracksieck’s attorney declined to comment on her case.

In the meantime, her fellow Yankee WAGs have been lifting her up, according to a screenshot of Bracksieck’s private Instagram account.

Last week, Voit and Holder sent her a care package with a note reading, “Just wanted to send a little something your way! We miss and love you big time!”