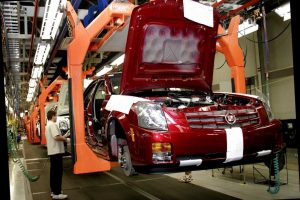 Three months after General Motors announced its plans to go all-electric, a peek inside one of its Michigan plants shows that the future is nearly here.

The country's largest automaker said in January that it aspires to eliminate tailpipe emissions from new light-duty vehicles by 2035, and on Tuesday, CBS This Morning offered a behind-the-scenes look at just how GM is working toward accomplishing that goal.

The news show headed to a GM plant in Lake Orion, Michigan, a massive space that's been renamed Factory Zero and now sits on Electric Avenue.

"[It's] completely different," automaker Mark Owens said. "I never thought I would see an all-electric vehicle where we didn't have any gas tanks in it."

To help with costs, GM has been building and testing batteries in-house, and manager Jim Quick said the plant's revamp will make it GM's biggest body shop.

GM plans to offer 30 all-electric models by the middle of the decade, and 40 percent of the company's U.S. models offered will be battery electric vehicles by the end of 2025, according to a January press release.

GM also aims to be carbon neutral by 2040 in its global products and operations.

"The aspiration to [get ride of tailpipe emissions] is really going to be based on the consumer and how well we solve some of the problems that people perceive around electric vehicles," GM President Mark Reuss told CBS This Morning. "I would say anybody that is making electric vehicles now or in the future is high motivation internally for us to win."

Most of those sales were from Tesla, though other companies are joining GM in making planet-friendly changes, including Ford, which plans to go all-electric in Europe by 2030.

"General Motors is joining governments and companies around the globe working to establish a safer, greener and better world," GM Chairman and CEO Mary Barra said in a statement in January. "We encourage others to follow suit and make a significant impact on our industry and on the economy as a whole."