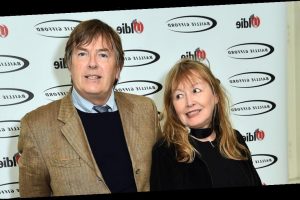 On Gogglebox, they are the couple that never cease to surprise us with their eccentric arm chair critique of our favourite TV shows.

However, there is one thing about Giles and Mary that always leaves us scratching our heads.

True Gogglebox obsessives may have noticed that the husband and wife often refer to each other as ‘nutty’, baffling some viewers.

Well, the truth behind the nickname has been unearthed and it’s just as eccentric as you would expect from the couple.

Mary explained all during a recent interview with the Daily Star, revealing: "We call each other 'Nutty' because we both consider the other to be a bit mad."

She then went on to say: "Giles has multiple personality disorder so he's all sorts of people and one of them is a bit of a genius. The truth is we're both neurotic."

During the tell all interview, Mary also admitted taking part in Gogglebox has "saved" the couple's marriage, as they used to be like "ships that pass in the night".

She told the paper: "Giles and I were like ships that pass in the night. I got up early, he went to bed late and we rarely even ate together."

Mary and Giles, who are in their 50s, met more than 30 years ago at Wimbledon College of Art where Giles was a student and Mary was hired as a model.

Mary was paid £4.50 an hour to pose as a costume model, but rejected an extra 25p, which was offered for her to go nude.

The couple share two grown up children together and their hilarious antics during their time on the show has won the hearts of the nation.

The pair have become some of the show’s biggest stars, alongside Amy Tapper who recently showed off her three stone weight loss.

END_OF_DOCUMENT_TOKEN_TO_BE_REPLACED

END_OF_DOCUMENT_TOKEN_TO_BE_REPLACED
We and our partners use cookies on this site to improve our service, perform analytics, personalize advertising, measure advertising performance, and remember website preferences.Ok