Home » Lifestyle » ‘Good on her’: Thorpe backs Price over calls for more details on Voice

‘Good on her’: Thorpe backs Price over calls for more details on Voice

Greens senator Lidia Thorpe has praised Coalition senator and leading No campaigner Jacinta Nampijinpa Price for calling for more transparency around the Voice to parliament as she insisted the party still did not have a final position on whether it will support the referendum.

As the Greens’ spokeswoman on First Nations issues, Thorpe said that while she and Price approached the Voice from “a completely different angle”, they shared a similar scepticism about the need for another advisory body and the Indigenous leaders “handpicked” by the Albanese government to steer the process. 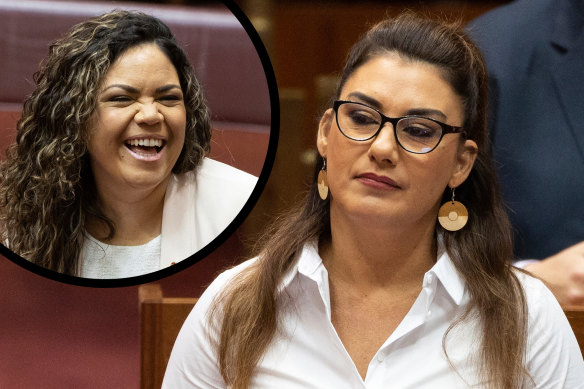 “Both of us in our collective experience have seen numerous advisory bodies try and fix things and fail. She has also seen the hand-picked spokespeople for our people, who she doesn’t agree with, and nor do I,” Thorpe told this masthead.

“I think transparency and accountability through any process that this country wants to take about making a decision on our lives is paramount – and I think that’s what Jacinta is bringing out and good on her.”

Thorpe added that people needed to respect there was not a singular homogeneous view across the Indigenous community, saying: “We have different ways that we think would bring this country together. Jacinta has hers and I, through the black grassroots movement in this country, have another way.”

Price — who has argued the Voice proposal lacks detail, is racially divisive and will add only another bureaucratic layer to failed governance structures in Indigenous communities — is expected to join forces with conservative Indigenous commentator Warren Mundine to spearhead the No case in the lead-up to the referendum, which is due in the second half of this year.

As the Nationals’ sole Indigenous MP, Price’s strident opposition to the Voice was a key factor in the party room’s decision last year to formally oppose it, which triggered the defection of Calare MP Andrew Gee, a Voice supporter, to the crossbench.

Replacing Gee on the opposition frontbench on Wednesday, veteran Nationals MP Darren Chester said he was not against the concept of the Voice but believed it was a “step too far” to enshrine this body in the Constitution, saying it could be legislated instead.

The Greens’ policy position is to progress all three elements of the Uluru Statement from the Heart – – the Voice to parliament, a treaty with Indigenous people, and a truth-telling process – while demanding Labor implement the outstanding recommendations from the decades-old Royal Commission into Aboriginal Deaths in Custody and the Bringing them Home report.

But in comments that add to the confusion around the Greens’ policy, Thorpe said it was incorrect to characterise the party’s position as broadly supportive of the Voice.

She called for Labor “to provide legal evidence” from an international constitutional expert that Indigenous sovereignty would not be ceded by being “incorporated into the colonial Constitution”, adding: “If we get evidence to the contrary – and we don’t have an opportunity for treaties – then we are doing the wrong thing.”

A spokesman for Attorney-General Mark Dreyfus said the Voice would not have any impact on sovereignty, but would instead “improve the lives of Aboriginal and Torres Strait Islander Australians. It will ensure the Government hears from local communities about local solutions and how to address existing policies that aren’t working”.

Thorpe’s position also appears to be at odds with previous positions advanced by her federal colleagues, including leader Adam Bandt.

In the lead-up to the federal election last May, Bandt described the Voice to parliament as something that “cannot fail”, saying the party’s policy was to “improve, not block vital legislation” and it would work to further truth, treaty and voice.

“We may only get one chance at a referendum to enshrine a Voice to parliament in the Constitution,” he tweeted in April.

In October, Greens senator Sarah Hanson-Young declared she would be doing “everything I can” to support Yes case.

Asked whether her position conflicted with the broader Greens membership — Resolve polling from December showed 85 per cent of Greens voters backed the Voice — Thorpe said she took her guidance from the party’s grassroots First Nations network, known as the Blak Greens.

“So if there’s anybody who disagrees with that policy, well then they need to chase it up with the Blak Greens,” she said.

Thorpe, who famously walked out of the Uluru Dialogues in protest, has long advocated for treaty-making and truth-telling to be the priority, rather than Voice – a position she repeated on Wednesday, saying: “this country needs to know the truth before they vote on something”.

She suggested a treaty process could deliver dedicated First Nations senate seats, which she said would be “real power” rather than an advisory body whose advice “was either taken or it’s not”.