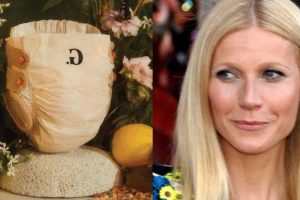 Gwyneth Paltrow has come out with a lot of eyebrow-raising products in the past, but her latest announcement had people talking after it appeared the Goop founder was launching a luxury diaper. However, the reveal wasn’t what it seemed.

Posting to Goop’s Instagram page, which has over 1.7 million followers, the actress revealed ‘The Diapér.’ The first image revealed a paper diaper with jewelled side fasteners and jute-looking details.

RELATED: Trump Lost His Twitter Lawsuit, But Elon Musk Has His Back

“Meet The Diapér. Our new disposable diaper lined with virgin alpaca wool and fastened with amber gemstones, known for their ancient emotional-cleansing properties,” the post’s caption read. “Infused with a scent of jasmine and bergamot for a revitalized baby,” the announcement continued. “Dropping tomorrow at 11a.m. EST at $120 for a pack of 12.”

The comments were divisive on Goop’s latest product drop, with many people accusing it of being some sort of prank. “Is this an SNL skit?” one person questioned, while another wrote, “Is it April fools day?”

Others pointed out that a pack of 12 diapers would barely last a couple of days in a house with a newborn. “Cool, so $120 for 2 days worth of bathroom blowouts,” one follower wrote.

However, shortly after the post was uploaded, Gwyneth shared a video in which she explained the motivation behind the luxury diaper and to confirm it’s not an actual product Goop will be carrying.

“Goop launched a luxury disposable diaper at $120 for a pack of 12 and there was a lot of outrage. Good,” she said in the clip, Entertainment Tonight reports. “It was designed to p**s us off.

“Because if treating diapers like a luxury makes you mad, so should taxing them like a luxury,” Gwyneth continued, referencing the diaper tax that’s present in many American states. “The Diapér is a fake product meant to shine a light on a real problem.”

However, the Iron Man star pointed out that ending the tax isn’t the “complete solution, [but] it could allow many families to pay for another month’s supply.”

Gwyneth’s post was done on collaboration with Baby2Baby, a charity aimed at making baby supplies accessible throughout the U.S.

Goop has uploaded a message to its website expanding on the diaper tax issue and its educational marketing campaign. “Despite the absolute necessity of diapers, in 33 states, they aren’t treated as an essential item,” the site explained. “They’re taxed as a luxury good. Depending on the state, this sales tax can add between 1.5 per cent and 7 per cent to their cost. (We priced our fictional Diapérs at $120, because that is what the diaper tax could cost families annually.)”

Both Gwyneth and Goop are urging the public to do what they can to raise awareness about the diaper tax and to help make baby supplies more affordable.