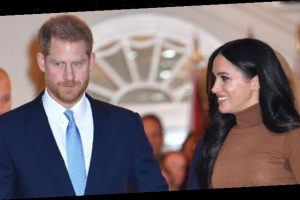 Entertainment prospects for Meghan Markle and Prince Harry are beckoning as Buckingham Palace finds itself in the middle of crisis talks today.

The discussions, which are believed to have kicked off around 2pm GMT today, have been described by the Queen as “very constructive”.

In a statement released early this evening, the monarch said, “My family and I are entirely supportive of Harry and Meghan’s desire to create a new life as a young family.

“Although we would have preferred them to remain full-time working members of the Royal Family, we respect and understand their wish to live a more independent life as a family while remaining a valued part of my family.”

The Queen says there will be a “period of transition” during which Prince Harry and Markle will “spend time in Canada and the UK” after the couple “made clear that they do not want to be reliant on public funds in their new lives”.

“These are complex matters for my family to resolve, and there is some more work to be done, but I have asked for final decisions to be reached in the coming days,” she said.

Following the Duke and Duchess of Sussex’s bombshell announcement last week that they planned to “step back” from their roles as senior royals and seek financial independence, reports have begun to indicate that the couple will look to the world of entertainment to carve out new identities when the dust settles.

In an op-ed for U.K. newspaper The Sunday Times, British journalist Tom Bradby – one of the few U.K. reporters to have forged a close relationship with Harry over 20 years – suggested that the couple may be considering a “no-holds-barred sit-down interview”.

British tabloid The Sun reports that the couple could enlist Oprah Winfrey, a guest at their May 2018 wedding, to conduct the potential interview. The couple’s teams are also believed to have reached out to ABC, NBC and CBS about sit-down opportunities.

In the fall, Prince Harry and Markle used a similar interview with Bradby in an ITV documentary about their tour of Africa to voice concerns around the unrelenting media scrutiny they have faced out of the U.K.

Asked whether she was coping, Markle replied at the time that she was “not okay” with the pressure – an admission that grabbed international headlines and suggested the former “Suits” star could be nearing a breaking point with the media.

More recently, Markle also seems to be carving out a path back to the entertainment arena, following reports that she recently provided voiceover work for an unspecified Disney project in return for a donation to the Botswana-based charity Elephants Without Borders.

It is believed that the voiceover pact was first mooted by Prince Harry during a conversation with Disney CEO Bob Iger at “The Lion King” premiere in London over the summer.

Questions around Prince Harry and Markle’s future come as the couple faced senior members of the Royal Family today at unprecedented crisis talks at Sandringham this afternoon, where the Queen gathered Prince Charles, Prince William and Prince Harry, with Markle reportedly calling in from Canada.

A final decision about the couple’s new roles within the Royal Family is expected to be decided within a matter of days.

Crucially, this will include exactly how much of the royal finances they are entitled to and the division between their own private commercial engagements, as well as their official duties and living arrangements.

END_OF_DOCUMENT_TOKEN_TO_BE_REPLACED

END_OF_DOCUMENT_TOKEN_TO_BE_REPLACED
We and our partners use cookies on this site to improve our service, perform analytics, personalize advertising, measure advertising performance, and remember website preferences.Ok