Harvey Weinstein Is "Being Closely Monitored" After Falling Ill in Prison 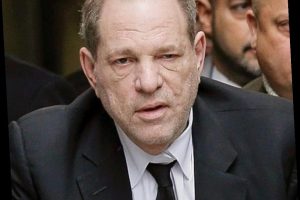 Harvey Weinstein is "being closely monitored" by prison officials after he fell ill with a fever. He has previously suffered from other health issues.

Harvey Weinstein has prompted concern among prison officials after developing a fever.

In a statement to E! News from publicist Juda Englemeyer and Craig Rothfeld, Weinstein's authorized NYSDOCCS and NYS Department of Health Representative, they said the convicted sex offender has fallen ill, although they are unable to confirm or deny if he has tested positive for the coronavirus.

They stated, "We can confirm that Mr. Weinstein has a fever and is being closely monitored by the excellent medical staff at Wende CF for which the entire legal defense team is grateful."

Additionally, Englemeyer and Rothfield mentioned that the prisoner has "numerous maladies and conditions including a heart condition, high blood pressure and spinal stenosis." They continued, "We are working with the NYSDOCCS and the excellent team at Wende CF to ensure Mr. Weinstein receives the proper medical attention he needs."

To conclude, Weinstein's representatives said they would share updates when they are "at liberty to discuss" them.

Weinstein is currently serving a 23-year prison sentence after being convicted on rape and sexual assault charges.

The former Miramax producer is also facing multiple charges of sex crimes in Los Angeles, Calif. He will have an extradition hearing on Dec. 11, after which he will travel to Los Angeles to stand trial.

Weinstein has continually denied all allegations of non-consensual sex.

The Juiciest Reveals About Pete Davidson and Ariana Grande's Romance

Camilla Luddington Responds to Criticism of Grey's On Set Masks