‘He freaked out when he realised she’d seen him naked’

Mother reveals her husband ‘freaked out’ when their toddler daughter saw him naked coming out of the shower – but do YOU agree parents should cover up around children?

A British mum has told of her confusion after her husband ‘freaked out’ when their baby daughter saw him naked.

The post on Mumsnet started when the mum, under the username of ‘Supertiredmummy’ posted her story around how her little girl – whose exact age she did not reveal – had started to walk recently.

She went on to describe how her daughter had run into the bathroom where her husband was just getting out of the shower. But her husband reacted differently to how she expected – he shouted for his wife to take their daughter out.

Laughing the experience off the mum thought her husband had been joking, but he became very serious about not letting his daughter see him naked. 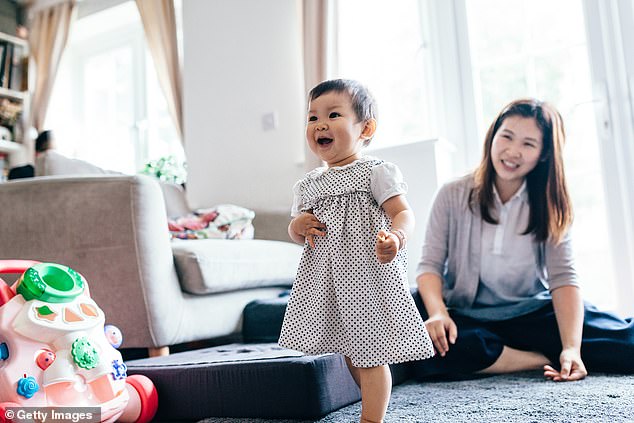 The British mother posed the question – is it weird for my husband to not want his own daughter to see him naked. The post got mixed responses on Mumsnet.

Her post received a mixed response from the other mums on the group. With many saying that it wouldn’t bother them and that it will probably happen plenty of times in the future.

While some other mums thought the exact opposite revealing that their husbands react the exact same way.

‘Supertiredmummy’ wrote in the original post ‘My baby has just started walking and is running about already. So today they ran into the bathroom whilst my husband was out the shower drying off and toweling his hair.

The mum went on to say: ‘He freaked out and told me to take her away. Initially I thought it was because she had scared him but turns out it was purely because he was naked.

‘I laughed this off explaining she had seen me naked plenty (hell I’m still breast-feeding ) but he got very serious and doesn’t feel comfortable about it.

She went on to ask the group: ‘AIBU to think this is strange? And trying to get him comfortable considering she might do this lots in the years to come?’

The comments she received on the post showed that all parents are different when it comes to issues such as these.

One user, named ‘Sesthis’ advised her to talk to her husband about it and said: ‘I don’t know about “strange”. Certainly irrational.

‘Worth having a conversation about in a very respectful and light-hearted way to find out exactly what the problem is, if he can tell you. If not, I guess it doesn’t cause any harm.’

While ‘festivellama’ was more on the side of her husband when she commented: ‘Some men don’t like being ‘interrupted’ when they are in the bathroom.

‘Tell him to lock the door.’

But ‘notdadycool’ diagreed and said: ‘Our kids see us naked at times, I saw my parents naked, I tried to avoid it, I’m sure my kids will too when they get awkward with it.’

The responses showed that all parents are different when it comes to issues such as these. One user replied and commented: ‘I don’t know about “strange”. Certainly irrational.’

While ‘WorraLiberty’ seemed to sit on the fence, and said: ‘There’s no right or wrong in this.

Your DH feels how he feels and if he doesn’t want the kids to see him naked, then that’s his choice.’

But she also agreed with ‘festivellama’ ending with: ‘He needs to get a lock for the door though.’