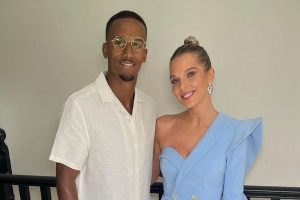 Helen Flanagan has reportedly called it quits with her fiancé Scott Sinclair after 13 years as a couple and welcoming three children.

The former Coronation Street star, 31, is believed to have ended things with Bristol Rovers footballer Scott, 33, with a source claiming the pair hit a "rough patch in the summer".

"They hit a rough patch in the summer and after Helen came back from South Africa it ended for good."

Helen and Scott announced their engagement back in 2018, with the footballer getting down on one knee during a trip to Disneyland Paris.

Helen, who was heavily pregnant with the couple's second child at the time of the proposal, had been dating Scott for nine years at the time and was eager to tie the knot with her beau.

She told OK! at the time: "I've pointed Scott in the right direction for an engagement ring. We've been together for nearly nine years and we'll soon have two kids, so it's about time."

The pair soon welcomed their second child and began planning their perfect wedding day, and despite deciding on a provisional date in 2020, their plans were delayed and they never made it down the aisle.

Earlier this year, Helen revealed that she and Scott had finally booked to get married in 2024, after finding the perfect venue.

The mum-of-three told The Mirror that she had been extremely "picky" when it came to choosing a venue, and admitted that both she and Scott had been "laid back" about their wedding preparations.

"I've been with Scott since I was 19, I'm 32 now, so I think we are probably a little bit laid back because it does feel like a marriage anyway."

Helen and Scott are parents to Matilda, seven, Delilah, four, and one year old Charlie, and as Helen co-sleeps with their children, she and Scott have not shared a bed for over seven years.

The former Corrie star opened up about their unusual sleeping arrangements earlier this year on social media, saying: "After seven years it would be nice as a couple to actually share a bed and not feel like flat mates.

Helen also told her followers that she's been renovating her house, but the next big project was supposed to be hers and Scott's bedroom.

"I’ve always just co slept with the kids out of easiness and just basically so I can sleep and just function in the morning," the star added.

As well as having separate beds, Helen and Scott also spend long periods of time apart due to their careers, which has no doubt put strain on their romance over the years.

When Helen isn't starring in Coronation Street, she would move around with Scott wherever he was training, but when filming the ITV soap she needed to be in Manchester.

Just one year before Scott popped the question, Helen admitted that she only saw her footballer beau on the weekends due to their work schedules. At the time, she was starring in Corrie and Scott was playing for Celtic.

At the time, the 32 year old said: “Me and Matilda live with mum and dad during the week and at weekends we’re in Glasgow with Scott. It’s really lovely actually, it’s nice to have a break.

The family settled in Cheshire last year, but earlier this month Scott joined Bristol Rovers, meaning he's now around 150 miles away when training.

Despite the obstacles the couple have faced, they always appeared to be a strong couple and it was only last year that they welcomed their third child and moved into their dream family home.

However, over recent weeks Helen has been spotted without her engagement ring and has attended several events alone.

The mum-of-three attended the National Television Awards earlier this month and her engagement ring was no where to be seen and neither was Scott as she walked the red carpet alone.

Following this, she attended close pal Charlotte Dawson's 30th birthday in Manchester alone and was once again seen without her diamond ring.

Most recently, she attended the Pride of Britain Awards alone and was supported by her on-screen sister Brooke Vincent at the event as they walked the red carpet together.