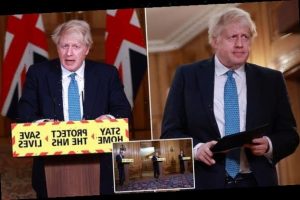 All triumphalism gone… and eyes as sorrowful as a thieving spaniel: HENRY DEEDES watches the Prime Minister announcing lockdown 3

Well, what a cheery start to the New Year this is proving to be. Another day and another talking-to from Boris Johnson on why, for the third time in less than a year, we are bolting the doors and battening down the hatches.

More lockdown means more dreary Downing Street press conferences. You will stay indoors, you will wear a mask, you most certainly will endure another of Prof Chris Whitty’s scintillating slide shows.

Speaking of Chief Medical Officer Whitty, old gloomy chops enlightened yesterday’s proceedings by suggesting that restrictions may need to be introduced next winter.

Dunno about you, but I’m already reaching for whatever’s still swirling around the bottom of the decanters from the festive period. Yes, yes, Dry January and all that. But considering all we’re going through, four days off the sauce really wasn’t bad going. 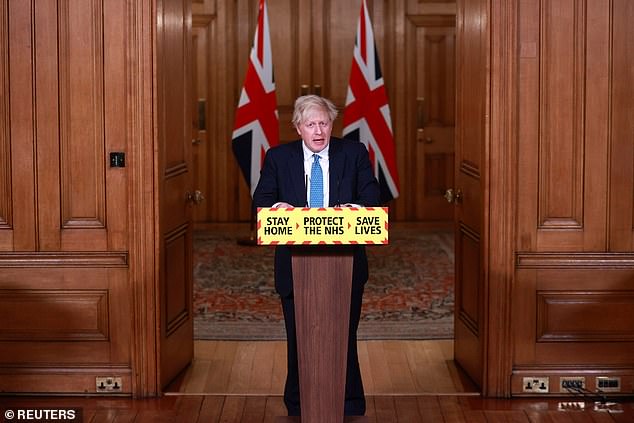 Well, what a cheery start to the New Year this is proving to be

The Prime Minister emerged from his lair almost bang on time for once. New Year’s resolution, perhaps.

There he stood at that same faux mahogany lectern emblazoned with the same daft slogans. (Incidentally, couldn’t that ‘Hands. Face. Space.’ nonsense have followed Dominic Cummings out of the front door? It sounds like something you’d find scrawled on nursery school walls for the attention of children still in potty training.)

Even the phrases Boris uses at these things have become so tediously familiar that they fail to have any impact. Yesterday, we heard about ‘our amazing NHS’, about throwing an ‘invisible shield around the elderly’ and were urged yet again to ‘follow the guidance’. I wondered if perhaps his speeches are now being composed via some sort of algorithm.

Present, too, were those standard ‘Borisisms’ wheeled out for these solemn occasions. Those pained grimaces, those eyes sorrowful as a spaniel after swiping a chicken carcass from the kitchen table. How long ago all that giddy Brexit trade-deal triumphalism seems now. 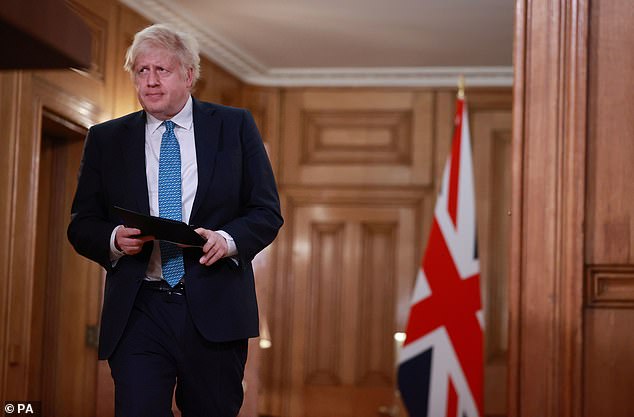 Another day and another talking-to from Boris Johnson on why, for the third time in less than a year, we are bolting the doors and battening down the hatches

Grim statistics were hurled at us. More than one million of us are now infected with the virus. Presented with such numbers, the PM said he simply had ‘no choice’ but to put up the shutters.

In the space of a fortnight, the country had slid all the way down the giant snake back to square one, and not a ladder in sight.

Unless, that is, you’ve put your faith in the vaccines. Naturally, Boris wanted to talk up this news.

Over a million people had received their first dose and he promised to keep us updated on the progress ‘day by day, jab by jab’. More daily press conferences in other words. Oh goody. Flanking the PM were Prof Whitty and Chief Scientific Adviser Sir Patrick Vallance (Whitty & Vallance sound like an end-of-the-pier double act, no?) who seemed a tad spooked by this super-infectious new strain of the virus spreading merry hell up and down the country.

Mind you, spooked has been this robotic duo’s factory setting since the crisis began. 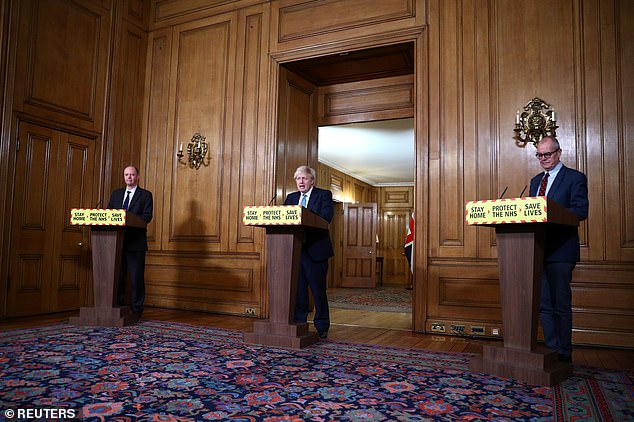 Whitty tossed up a couple of slides, which showed that hospital admissions were now higher than ever. One in 50 of us are now infected.

‘Some of those will go on to die,’ the CMO announced matter-of-factly. He sounded like a company bean counter pointing out how many of the firm’s creditors he expected to default over the coming financial year.

I don’t know what Christmas larks took place Chez Whitty after the nut roast, but I’m guessing from his limited range of expressions, he’s not a charades man.

The journalists who quizzed them afterwards needled away as to why Boris hadn’t locked the country down sooner. Whitty’s poached egg eyes jiggled from side to side as if to say, ‘I would have liked that!’ Course he would. He’d have had us all shut away in our basements since March. He kept urging us all to ‘really buy into’ the new restrictions.

We have, Prof, we really have, I found myself saying to myself. Trouble is that we just keep finding ourselves right back where we started.