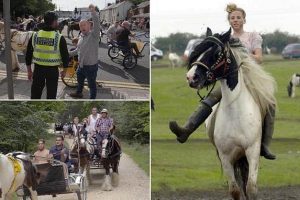 A new Channel 5 documentary is set to offer a glimpse into the traditions and daily life of traveller communities around the UK.

Here Come the Gypsies, which begins airing tomorrow at 9pm, chronicles the lives of several families across the country, including MMA fighter Tony ‘The Rhino’ Giles who tries to settle a feud between two rival families in the community with a bare knuckle fight.

Meanwhile  father-of-five Jim ‘Beb’ Prince, from Cardiff, is seen squaring up to police after he gets drunk at the pub while organising a horse drive to sell animals to potential buyers.

The show also follows fortune teller Linda as she tries to make a living charging just £20 per reading. 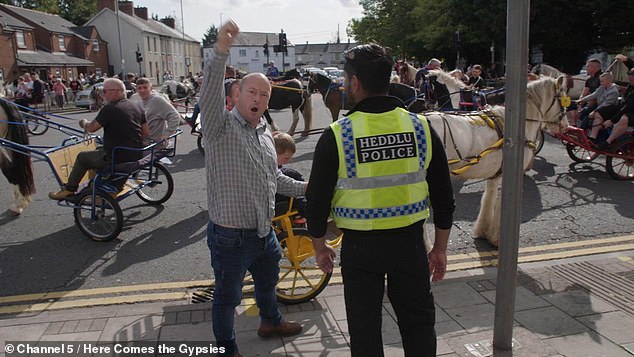 Here Come the Gypsies, which begins airing tomorrow at 9pm, chronicles the lives of several families across the country (pictured, in Wales horse tradesman Jim ‘Beb’ Price gets into a tiff with the police during a horse drive he’s organised)

Renowned titled MMA fighter Tony, from Surrey, proudly discusses his heritage on the programme, explaining: ‘We stick together, it’s in our blood, in our genes, we are fighters.

‘You’re being brought up from an early age, whether you like it or not, to protect yourself. In the Gypsie community, money comes second to fighting.’

Bare knuckle fighting has long been a tradition within the community, with Tony’s grand-father a trainer.

Tony explains he is organising a fight between two feuding families within the community. 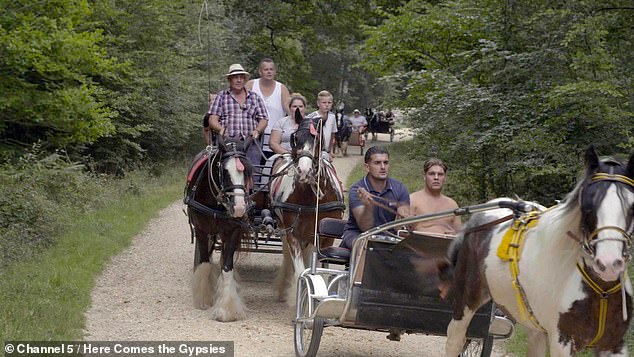 A horse drive, pictured, is the occasion for gypsy horse tradesmen to showcase their merchandise to interested buyers

While the origins of the feud are unknown, it is believed two men from the family had a dispute over a woman, leading to further arguments between their relatives.

Giving his version of events, Tony says: ‘It started with two young boys out on a night out and then ever since, uncles, cousins, brothers, women, had disputes and arguments all over the same thing.’

‘All that pressure and aggravation and looking over your shoulder and worrying about 5 of them pulling up while you’re with your missus at Tesco,’ he adds.

Each family will have one fighter defending their honour, while Tony and Jonny will act as ‘fair play men,’ making sure the men are safe and breaking the fight if need be. 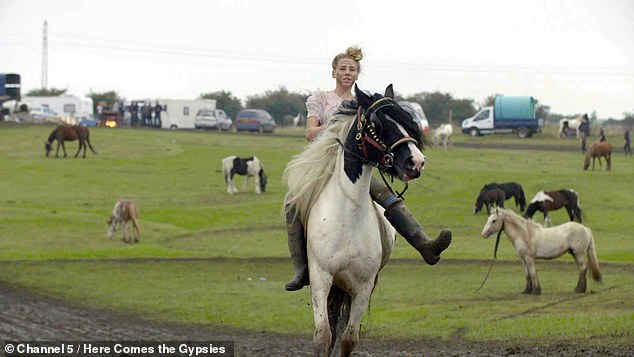 Once the fight is called, the family will have to forget the feud, with Tony revealing: ‘It’s very serious, this has been going for 5 years, it’s a very big fight.’

LIVING ON THE MARGINS OF SOCIETY FOR CENTURIES

Roma is a term for various groups who have migrated across Europe for centuries and are now the biggest ethnic minority in the European Union, most of them from countries like Romania, Bulgaria and the Czech Republic.

There are an estimated 10 million across Europe and one in five lives in Romania.

Since their arrival in Europe from India some 700 years ago, they have been politically, socially, culturally and economically marginalised by the dominant population, who have consistently shown negative social attitudes towards them.

The vast majority live on the margins of society in abject poverty, which makes them easy targets in troubled times.

British Gypsies of the Romanichal and Kale Romani groups have lived in the UK since the 15th century.

The first Roma from the new EU countries, particularly from the Czech Republic, Poland, Romania and Slovakia, came to the UK in the 1990s seeking asylum to escape persecution.

Since the enlargement of the EU many more have moved legally to the UK to find work, equal opportunities and a good education for their children and to escape racism and discrimination.

Bare knuckle fights often happen in front of volatile audiences that can break into violence as well, which means Tony and Jonny have to remain vigilant.

Tony explains: ‘It’s all about law and respect and culture, if your a gypsie, traveller, this is what you have to do.

‘It can turn into a massacre, I’ve seen it, everybody erupts and it’s not a very nice thing,’ he warns.

The fight starts, and after each fighters strikes a few blows, Tony puts an end to things and forces the men to shake hands.

Once the fight is over, the two fighters are duty-bound to forget all about the feud. The fight is considered a draw, and all the men head off to the pub.

Meanwhile horse-trader Beb also appears in the programme, and explains his family have been in the trade for years.

Beb, who lives on an allotted piece of land with his mother, children, and grandchildren, says he counts on the trade to maintain an income and feed his family.

While he works as a roofer and gardener, horse trading is his main business, and he keeps 12 horses in a field nearby. He has to sell three to four per year to keep his family afloat.

Beb explains: ‘I wouldn’t give my way of life up for no other way, and it is important, ’cause if we don’t keep it going, travelling life will come to an end.’

However, due to stricter regulations on horse fairs he claims are ‘ruining his life,’ Beb depends upon horse drives to showcase and sell his horses.

The drive takes place on a pre-agreed route, and interested sellers can see the animals in action. There are four stops along the route, where the tradesmen are drinking and making deals.

Beb explains: ‘We get a couple of pints, bit of food down us and see if there’s any dealings going on.’

The day of the drive, in Newport, after a few stops at the pub, passers-by began complaining about Beb and his fellow tradesmen, who let their horses trot free in the street.

Some people have growing concerns that an accident could occur, but Beb didn’t share their worries.

One local says: ‘If I can’t drive a car after knocking down five, six pints, how can someone get on a horse and be responsible for an animal? That should be a question for the police.’ 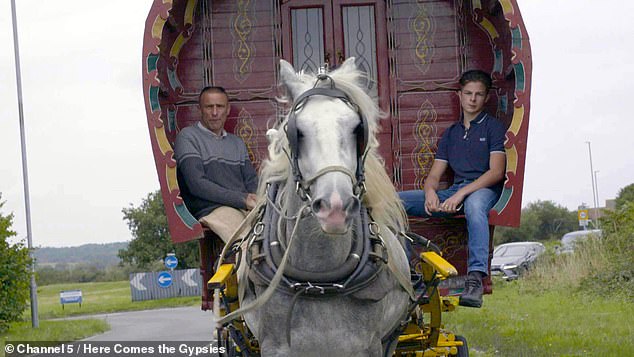 Pictured: a father and son from the travellers community on a old horse-drawn carriage during the documentary

When the police show up, Beb, who is holding two pints of beers, pleads with officers to let the drive go on.

He says: ‘We’re only enjoying ourselves, I moved the horse off the road, didn’t I? And you’re still giving me a bad life. I don’t need your s***.’

Feeling as though he was being treated unfairly by police, Beb pushes back, saying: ‘We’re only gypsies but we got to have rights, come on, boys, be fair.’

While he accepts to move the drive on, Beb says the police intervention hasn’t put a damper on his day. 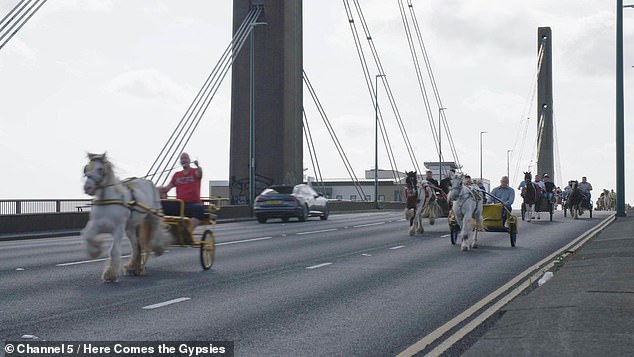 During Beb’s horse drive, the tradesmen and buyers travel to Newport, where they stop at pubs for a few drinks

Before leaving, he throws a fist in the air and says: ‘Gypsie’s rights, Romani rights.’

Unfortunately, in spite of his efforts, Beb didn’t manage to sell a single horse at the drive, though he says organising a pleasant drive will help maintain his reputation within the community.

Meanwhile, viewers are also introduced to fortune teller Linda, from Darlington, who is struggling to find clients for her reading business. 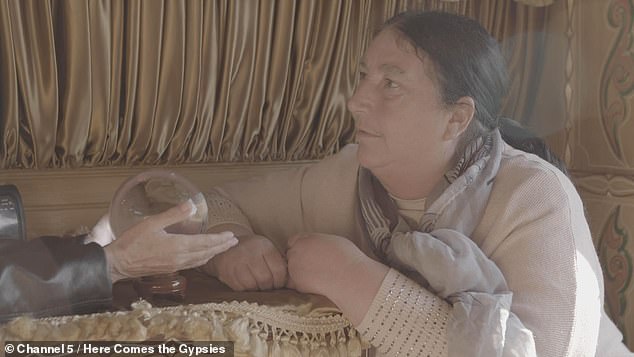 In the show, viewers are also introduced to  fortune teller Linda, in Darlington, who charges £20 per session and says the council won’t meet with her to discuss permits

Linda charges £20 a reading, and while her clients are satisfied with her services, she is struggling with the council who have banned her from her old location.

’20 years ago, travellers were accepted in community, going round the doors, but now, no, the police is like “you need a permit for this and a permit for that”,’ Linda says.

Linda says the council have moved her business to a side of town where nobody goes, explaining: ‘You get discriminated at market. Being discriminated affects my business all the time. 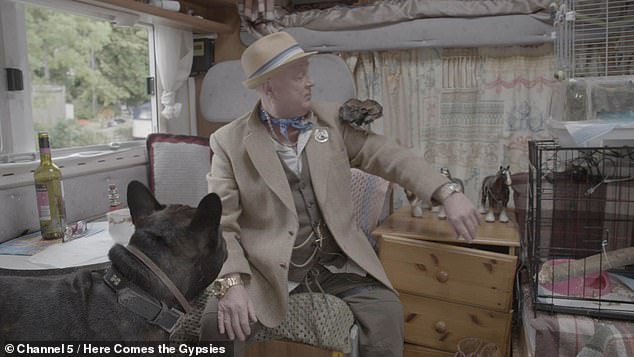 Meanwhile Diamond Jackson, whose real name is Steven, is followed by cameras on the show as he organises his own funeral

She decides to set shop at the local Sunday car boot sale, because most of the people in the community will be off work, and she ends up making £100.

Meanwhile another traveller, Diamond Jackson, who is suffering from terminal cancer, also appears on the show as cameras follow him while he plans his own funeral.

Diamond, whose real name is Steven, wants to go in style, in keeping with travellers traditions where funeral are shows of wealth and grandeur.

He travels to the Durham Gypsie fair in order to shop for a coffin, and says his last breath of air will be a big ‘gulp of wine.’

Here Come the Gypsies airs tomorrow at 9pm on Channel 5.