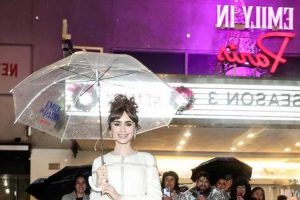 33-year-old Lily Collins’ net worth is estimated to be $25 million, and the Emily in Paris actress has been getting rave reviews for her role in the hit Netflix series.

It is not just her illustrious acting career but also the family legacy that sets the Mirror Mirror star apart from her colleagues in the film industry. She earns $300,000 per episode of Emily in Paris, which means the estimated earnings through the Netflix runaway hit is $3 million per season. Appearing in films since the young age of two, the Golden Globe-nominated actress has also tried her hand at modeling. With more than 25 films to her credit, she has certainly created a name in Hollywood within a short span.

Lily’s family inheritance is estimated to be $300 million. She and her siblings are entitled to this vast legacy through their father, Phil Collins.

Born With A Silver Spoon

Destined to be in show business since birth, Lily was born to rockstar Phil Collins and architect Jill Tavelman in 1989. Her father is best known as the lead singer and drummer of the sensational UK band Genesis. Five studio albums released by the band were chartbusters in the United Kingdom for a long time. Another Day in Paradise, released in 1989, is one of the most sensational hits of all time. Winner of eight Grammy awards, one Academy award, and two Golden Globes, Phil has a lasting legacy.

In 2012 he was estimated to be the second wealthiest drummer in the world. In 2018 The Sunday Times Rich List named him the top 25 wealthiest musicians in the UK with a net worth of $120 million. By 1996 he divorced Jill, and their settlement was worth $17 million. According to Music Times, today, the legend has a total of $300 million to his name; Lily and her siblings are known to gain this vast family inheritance someday. The actress has faced the arc lights since the young age of two. She appeared in the BBC series Growing Pain; after her parents divorced the Love, Rosie actress moved to LA with her mother.

According to Stylecaster, shifting her base to LA was a lucky move. She swiftly got to star in the critically acclaimed The Blind Side (2009) along with Academy award winner Sandra Bullock. She went on to acquire stellar roles in Mirror Mirror (2012), Stuck in Love (2012), Love, Rosie (2014). Lily branched out to television series and played the lead in Les Miserables (2018). She went on to play the main character in the drama Extremely Wicked, Shockingly Evil, and Vile (2019) as serial killer Ted Bundy’s girlfriend. In 2020 she picked up the role of Emily in the hit Netflix series, and the channel has been expanding the seasons, thus increasing her net worth per year to millions.

According to Parade, Collins Mirror Mirror (2012) film has earned a gross of $183,018,522 at the box office. She was paid tens of thousands of dollars for her role. Similarly, the film To The Bone (2017) made huge profits, with Netflix acquiring the world rights for $8 million with her in the lead role. Turning the bankable star to winning her seasons of series with Emily in Paris. Netflix has since paid the petite actress $300,000 per episode, thus turning her earnings to $3 million per season.

According to Cosmopolitan, the pretty actress has also made herself comfortable in the real estate business. In 2018 she sold a family condo for $2.99 million, and a Beverly Hills estate worth $12.5 million is also listed under her mother’s name. The total net worth is reported to be $14 million in the hot LA property scene. Lily has an estimated 27.3 million followers on social media. Thus making her an influential figure for the younger generation. Her net earnings from paid posts and brand endorsements are calculated at up to $17.15 million per year.

She has been chosen as a brand ambassador for coveted fashion houses and luxury outlets. Being the face of Cartier, Living Proof hair care range, Lancome, and Movado. She recently replaced Jennifer Aniston for the Living Proof bio-brand that shares expertise in natural hair care. The stunning actress is set to receive millions with this exclusive contract. She has been seen promoting the product via her social media several times. Besides these, her appearances on the cover of the famed fashion bible Vogue, modeling for Harper’s Bazaar, Porter Magazine, and Glamour magazine have increased her net worth by a few more million.

The rest of the details on earnings surrounding her brand endorsements are thickly guarded secrets. But there is no doubt that Collins instantly achieved fame and success in Hollywood.

Through films, modeling, and brand affiliations, Lily Collins boasts a jaw-dropping net worth of $25 million. The Emily in Paris actress has been leaving her mark in every field, not just acting.