Home » Lifestyle » Here’s How Much Pope Francis Is Really Worth

Here’s How Much Pope Francis Is Really Worth 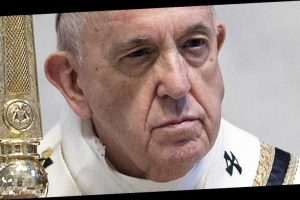 At just over 100 acres, or about an eighth of the size of Central Park in New York, Vatican City is the smallest country in the world. It has everything: a mint that prints its currency, it has its own postal system, and it issues its own passports. History, which profiled the city-state, says its population is made up of Swiss Guards, several members of the Catholic clergy, as well as the members of the Sacred College of Cardinals, who are the pope’s counselors and are considered to be “princes of the church” (via Britannica).

But the Vatican doesn’t just have a tiny population, it also sits on a vast collection of priceless real estate and art. The papal palace, or the Apostolic Palace of Castel Gandolfo is over four centuries old, as is the Holy House of Loreto (via Walks of Italy). Then there are the Vatican Museums (26 of them), which includes the Sistine Chapel. If you want to try and put a dollar value on that, don’t, because when the Vatican released its first-ever financial statement, which listed its net assets as 4 billion euros, it didn’t include the Vatican bank or the Vatican museums (via Reuters).

When Jorge Mario Bergoglio was elected pope by the College of Cardinals back in 2013, he became the Vatican’s absolute monarch. But unlike other monarchs like Britain’s Queen Elizabeth II, he owns none of what he is seen to control.

Jorge Mario Bergoglio, or Pope Francis, entered the priesthood in the 1950s (via the National Catholic Reporter) as a member of the Society of Jesus, or the Jesuits, an order of Catholic priests who have lived under a stated vow of poverty for nearly two centuries. This means that when he joined the Jesuits, then-Friar Bergolio had to give up everything he owned, to live on a budget dictated by his superior. As fellow Jesuit James Martin points out, Bergolio “had to turn into his community anything he earned and any gifts. He had to ask for cash for large purchases, such as a suit” (via CNN). In another article for America, Martin also says the Jesuits are not allowed to mess with the vow of poverty, unless they might be looking to make it more “strict.”

Francis’ austere nature is visible in his style of dress. By contrast, Pope Emeritus Benedict XVI loved his red loafers, ermine cloaks (via The New York Times), and a Mercedes popemobile with a leather seat and gold trim (via NBC News). To this day, Pope Francis prefers his white cassock and travels around in a Fiat or Ford Focus (via The Washington Post).