Any millennial out there knows that the ’90s were a total treasure trove for tasty as heck snacks. Above Scooby Snacks, Cosmic Brownies, and Bugels, though, Go-Gurt and Dunkaroos had to be two of my absolute favorites. So you could probably imagine how excited I was to hear that General Mills has combined both to make one deliciously dunk-able snack. And if you think that sounds up your alley — in the slightest — here’s where to get Go-Gurt Dunkers. They will give you total ’90s Dunkaroo vibes.

Like the majority of 20-somethings living in New York City, I’m constantly on the go. Between work, the gym, and various plans to hang out with friends, my day tends to be be jam packed, and I’m constantly on the brink of insatiable hanger. So, when the portable, mess-free gift of Go-Gurt Dunkers entered my life, you know I was absolutely thrilled, because they also remind me a lot of my favorite ’90s treat that came with frosting and kangaroo-shaped dippers.

The Go-Gurt Dunkers opt for yogurt in place of sweet icing, but they still give me that Dunkaroo feel. According to General Mills, you can choose from three classic Go-Gurt flavors, which include: vanilla, strawberry, and cotton candy. Each box offers four packs, and each come with eight or nine honey graham crackers or chocolate flavored cookies to fulfill any and all of your dunking needs. The suggested retail price is only $3.99, so I’m definitely buying all three flavors. 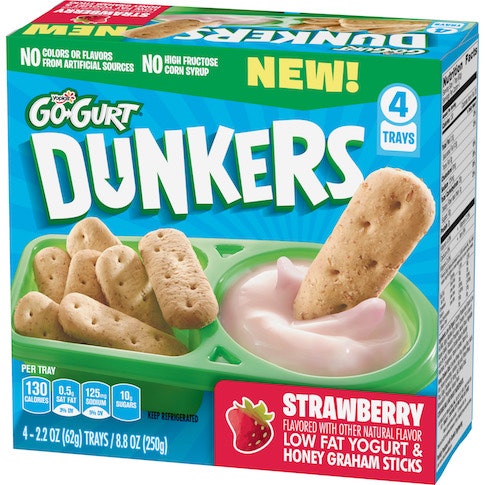 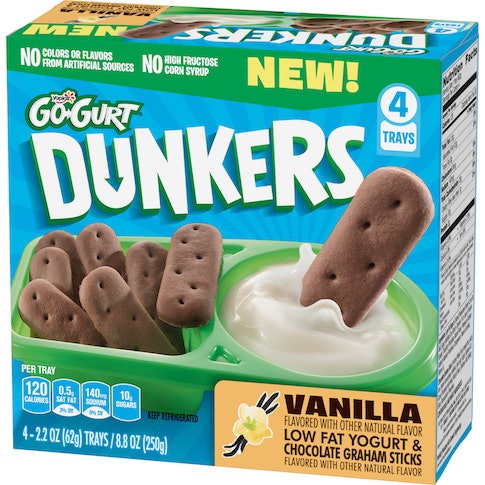 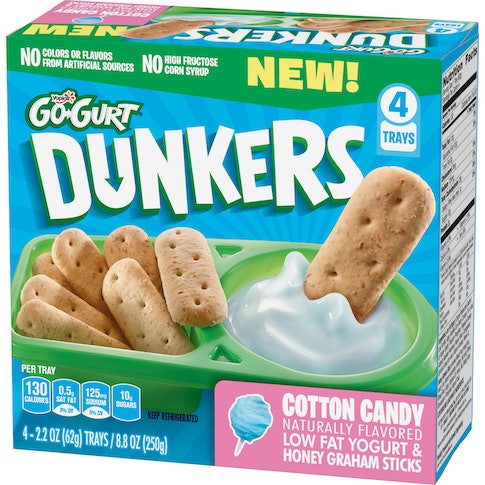 WOW, they’re totally a dream come true, y’all. OK, now that you’ve seen the tasty goodness, you probably want to know where the heck you can find these treats.

It looks like after the new year, you’ll be able to find this snack at almost any grocer. According to General Mills, Go-Gurt Dunkers are starting to rollout in grocery stores nationwide, and they’re going to become more widely available in January 2019. Currently, it appears they’re being sold at Kroger, they’ve been spotted at Target, according to the Impulsive Buy, and according to the popular food Instagram account, @JunkFoodMom, you also can find them at Meijer. The bottom line is that you definitely have a wide variety of options, and you’ll have even more as of January 2019. Bomb.

Man oh man, I don’t know about you, but seeing this new twist on an old favorite of mine is giving me major #TBT vibes right now. And if you, too are feeling pretty nostalgic from the mere sight these babies, you should probably take a moment to check out what your favorite ’90s snack says about you. Between confident Totino Pizza Roll lovers, spontaneous Baby Bottle Pop fans, and the motivated Choco Taco enthusiasts, there are so many different types of people, and your personality can be pretty accurately determined based on your snack of choice. Sounds wild, doesn’t it?

Anyway, as you can see, General Mills is coming in real hot right now by slipping this Dunkaroo-like Go-Gurt treat into each and every one of my lunch bags, backpacks, and purses. By offering all three of the original Go-gurt flavors, as well as not one — but two — deliciously different dunking options, there is absolutely no way I’m going to get tired of them. TBH, I could go for one right now.