The holiday season is a great time of the year to spend with family, however, when you become a member of the royal family, exceptions must sometimes be made. Such is the case for the Duchess of Sussex, who will be celebrating the holidays apart from those she loves most. According to People, Meghan Markle and her mom won’t be spending Christmas together, despite previous reports to the contrary.

Earlier this month it was confirmed that Markle would be in the U.K. during the holidays, which is when reports began circulating that her mother, Doria Ragland, would be accompanying her and the royal family. According to a source for Express, the Queen extended an invite to Ragland, stating, "It’s a mark of the Queen’s respect for Meghan and an acknowledgement that she doesn’t have any other relations in this country — unlike Kate [Middleton] who has the support of a very close family."

The news came as somewhat of a surprise, considering that members outside of the royal family don’t usually get to hang out with the Queen of England on Christmas Day. Markle was the exception to this rule last year when she broke tradition by joining Prince Harry for Christmas festivities prior to their marriage, according to People. To help put this into better perspective, Kate Middleton had dated Prince William for over a decade before they were able to spend Christmas Day together, and by the time it happened, they were already married, so Markle’s attendance last year was definitely marked as a big deal. But despite this more modern approach to yuletide customs, it seems as though Markle’s mother won’t be in attendance after all.

A royal insider reportedly told Us Weekly that the Christmas invite rumors, may have been just that: rumors. "She is of course welcome at Sandringham,” an insider told Us. "But wasn’t formally invited for this Christmas." 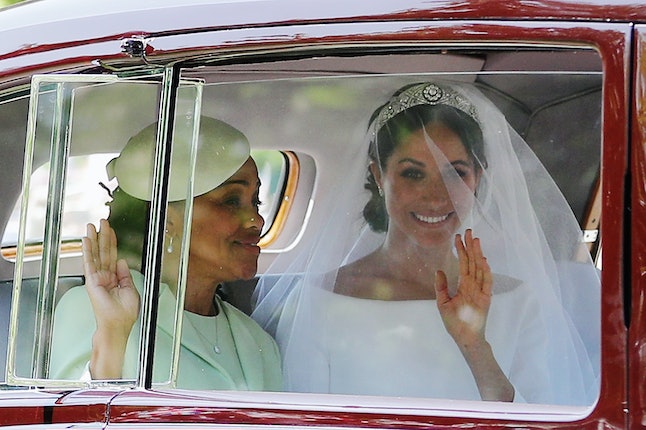 It’s important to note that Middleton’s parents have also never been invited to join the royal family for Christmas either, so perhaps the decision is due to the Queen not wanting to appear to show favoritism for one granddaughter-in-law over the other. Then again, there’s no way of knowing what the exact reason is behind this decision, so it could be due to some outside circumstances we have yet to be made aware of. Either way, Markle and her mother will be spending this holiday season apart.

However, the good news is that Ragland still seems to be on great terms with the royal family. When the news broke about Markle’s pregnancy, a tweet from royal commentator Omid Scobie stated that Ragland "is very happy about this lovely news and looking forward to welcoming her first grandchild." Maybe Ragland will get an invite next year for her grandchild’s first Christmas. It’s hard to say how things will play out, given all the royal traditions that have been in place for so long. But then again, Markle has made a pretty great habit of breaking traditions, so it’s definitely not out of the question.

Regardless of who is and isn’t in attendance, Prince Harry and Markle’s first Christmas as a married couple will hopefully end up being a joyous affair nonetheless.