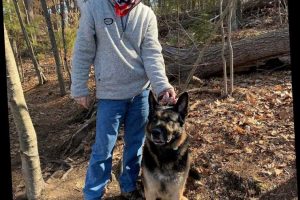 Diesel to the rescue!

On Wednesday, while walking around Massachusetts' Quarter Mile Pond with his owner Thomas Walsh, 5-year-old dog Diesel spotted a man struggling in the pond. In response, Diesel alerted his owner to the individual in need, according to Boston 25 News.

Walsh, who told the outlet that he was wearing headphones on his walk with Diesel, said he would have never seen or heard the man in the pond without his dog's help.

"The dog alerted me that there was something going on in that water," Walsh told Boston 25 News.

After spotting the man in the pond, Walsh called 911 and attempted to help the young man, 22, splashing in the water. Walsh offered the man clear instructions on how to make his way back to land safely while he waited for more help to arrive.

"I told him to try to relax, catch your breath because he was panicking, you know what I mean," Walsh said. "My instinct was to go in and help him, I'm a great swimmer, but you can't do that in the wintertime." Although the young man kept falling through the ice on his way to the shore, another individual soon appeared and lent a hand in the rescue mission, Boston 25 News reported.

"Another fellow was walking through the woods, and I tied the dog to a tree, and I grabbed a big branch from another tree, and we threw it in, and he was kinda too weak to grab onto it and pull it," Walsh said. "So he finally held on with his other hand, and we kinda just dragged him through the water and got him up on shore."

First responders arrived soon after the rescue and took the young man to the hospital, where he was treated for his injuries, per The Patch. The man's injuries are believed to be non-threatening.

"We are grateful for this outcome and for Diesel alerting his owner that something was wrong," Stoneham Fire Department Chief Grafton said in a statement. "The two men who helped the patient get to shore did the right thing by calling 911 immediately and using a branch to help pull him in rather than trying to get in the water themselves. These actions helped to save a man's life this afternoon and are nothing short of heroic."

But, according to Walsh, there is only one real hero to attribute the daring rescue to. "[Diesel's] the hero today, nobody else," Walsh told Boston 25 News.