The VERY sensible hiking boot that’s become this season’s unlikeliest It shoe (with a little help from Holly!)

She’s usually seen sporting feminine high heels in her day job on This Morning, but Holly Willoughby swapped studio glam for practical junglewear for her stint on I’m a Celebrity… Get Me Out of Here!

And it seems that the functional footwear already has a large celebrity following, with the likes of model Hailey Baldwin, Strictly Come Dancing finalist Stacey Dooley and actress Jodie Comer being snapped wearing the in-demand brand.

So it’s fair to say, Grenson boots are having a moment. 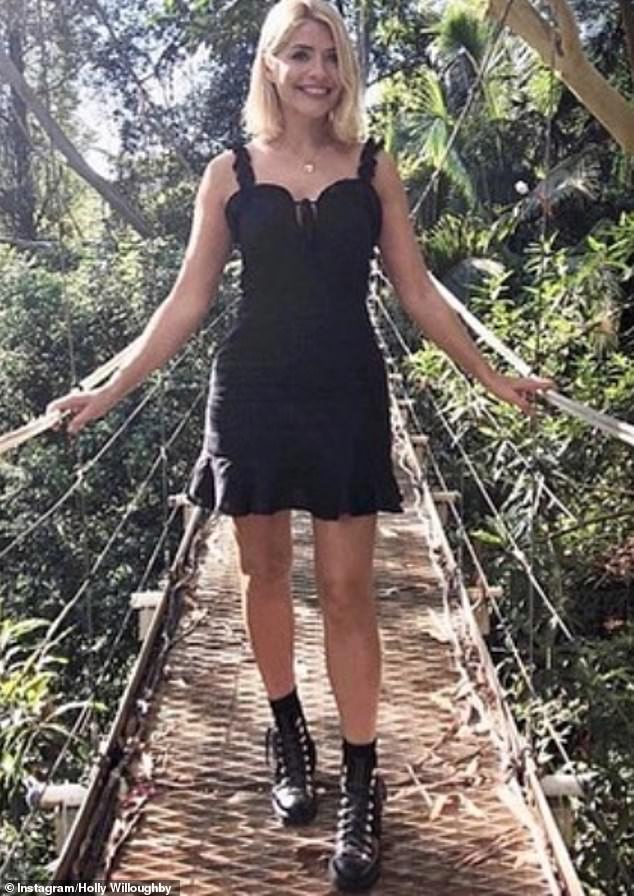 Holly Willoughby matched an Isabel Marant outfit with a pair of boots from Grenson for her first appearance on the hit ITV show, I’m a Celebrity Get Me Out Of Here (pictured), sending fans wild. The boots have become a surprise hit and are now sold out

Jenna Coleman opted for the ‘Nanette’ Grenson boots when she attended day one of AlienCon on November 9 in Baltimore, Maryland (pictured)

Irish television presenter and broadcaster Angela Scanlon uploaded a picture of herself wearing a pair of Grensons boots for all of her 119,000 followers to see (pictured)

After sharing her outfit details on Instagram throughout her stint in the jungle, stylish presenter Holly, 37, was inundated with hundreds of complimentary comments from fans.

‘Loving the boots Holly you are rocking them well with the outfit!’ one fan wrote. ‘Nanette boots are sooo cute,’ wrote another.

Another penned: ‘You were amazing and looking fab! Loving the @grensonshoes.’

With so much recent publicity, it’s no surprise the £255 Grenson ‘Nanette’ boots are out of stock.

Speaking of this season’s unlikeliest trend, celebrity stylist and designer, Lucas Armitage said: ‘The fashion power of Holly is unstoppable right now, there’s no other explanation for how an ugly hiking boot could become the unlikely boot hit of the season.

Holly’s shoe-game had everyone desperate to get their hands on her boots, especially with the change in the weather

‘Gregson are a very functional practical brand so juxtaposed against high fashion look they create an interesting vibe.’

But anyone wanting to get their hands on them will have to wait a while as a spokesperson for Grensons commented on their Instagram page: ‘Coming back in stock soon, we promise.’

The increasingly popular shoe brand has now amassed over 103,000 followers on Instagram alone. 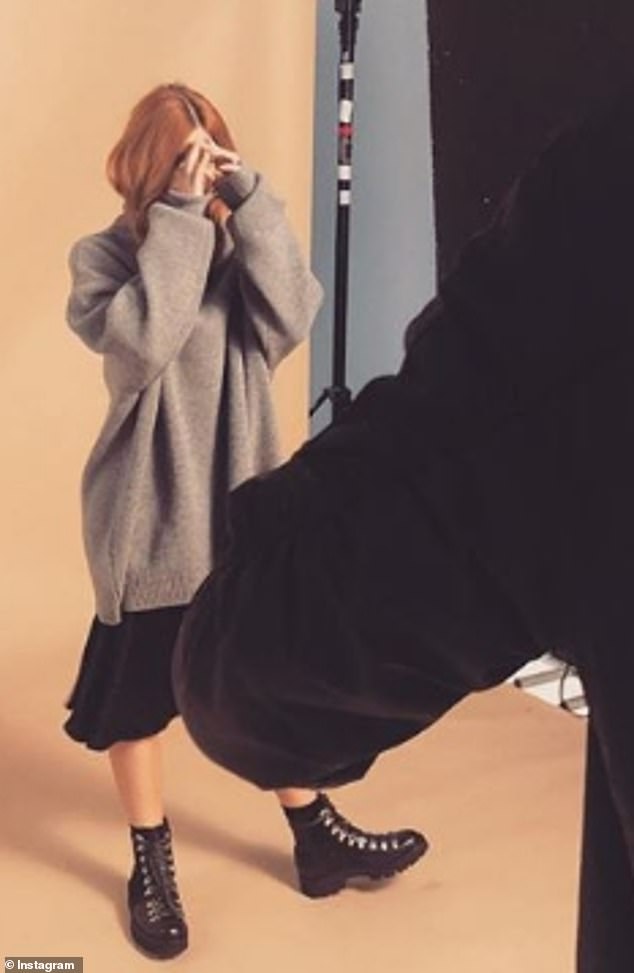 Stacey Dooley was styled in the black ‘Nanette’ boots for a photoshoot (pictured), but they have since sold out. A spokesperson took to Instagram to promise fans ‘they are coming back soon’

Other celebrities, including Stacey Dooley and Jenna Coleman, have stepped out in the popular footwear.

The iconic House of Holland x Grenson hiking boots made their debut on the Autumn/Winter 2018 catwalk at London Fashion Week – so it’s no surprise the suede leather boots, which feature colourful shark-jaw braid, was the footwear of choice for Baldwin when she was papped in LA.

Meanwhile, Emma Willis steered away from the boot trend and opted to wear the limited-edition Lulu Guiness Clara loafer instead – which come complete with the iconic red lip.

Stylist Lucas Armitage added: ‘With snow on its way you could be walking around slippy streets with the super practical non slipped sole and your feet nice an warm.

‘Wear with 10 denier tight a minute skirt and a chunky knit for the ultimate no effort made fashion pack vibe.’