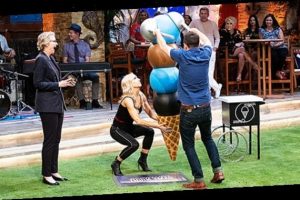 Nikki Glaser plays What’s the Scoop? with her celeb teammates in this EXCLUSIVE preview of the all-new ‘Hollywood Game Night,’ and the Chrisley family tries to get her to mess up and lose the game!

Nikki Glaser, Kal Penn, and Yvette Nicole Brown team up for a game of What’s the Scoop? in this EXCLUSIVE preview of the June 28 episode of Hollywood Game Night. The celebs, along with contestant Andy, get a number of the pop culture clues right, which means they have to add a huge ice cream scoop to the cone Nikki is holding.

Nikki is really trying hard to balance the scoops. When the fourth scoop is added to the cone, the Chrisley family, including Todd, Julie, and Savannah Chrisley, start taunting Nikki by chanting “drop it” over and over again. They don’t stop!

The June 28 episode features the Chrisleys challenging Kal, Yvette, and Nikki in fun and outrageous outdoor games. In the series, two contestants take a break from their everyday lives to join a lively night of frivolity and celebration at Jane’s “summer beach house” as they compete in two teams alongside some of their favorite celebrities for the chance to win up to $25,000.