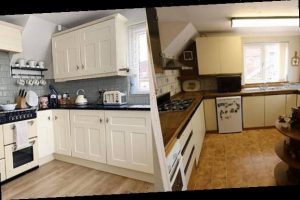 First-time homeowners reveal how they saved by £3,500 on their kitchen renovation by buying one secondhand from eBay and fitting it themselves by following YouTube tutorials

First-time homeowners who had a tight budget revealed how they were able to transform their dated kitchen, while saving on the cost of an average renovation by 28 per cent.

Sarah Macklin, 25, and her husband Jay, 26, who live in Cheshire, explained that they bought a secondhand kitchen on eBay for £850 and installed it themselves to avoid going over their £1,500 budget.

The couple spent just a week installing appliances including a built-in freezer, cooker and the units, following YouTube tutorials and learning by trial and error.

Having re-wired the kitchen, they then enlisted an electrician to sign off their work and hired someone to fit the tiles. 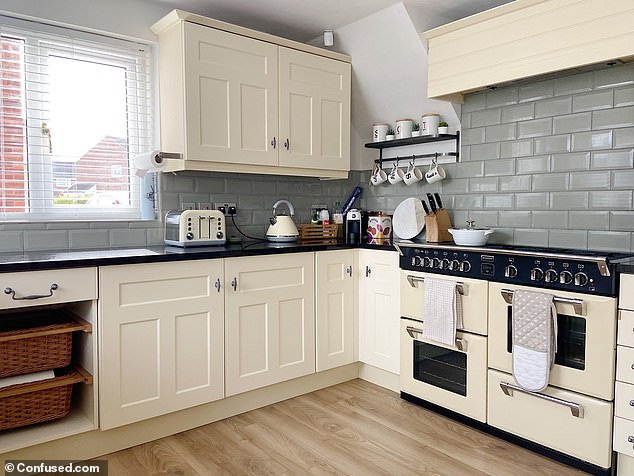 Sarah Macklin, 25, and her husband Jay, 26, who live in Cheshire, revealed how they were able to overhaul their dated kitchen for £1,500 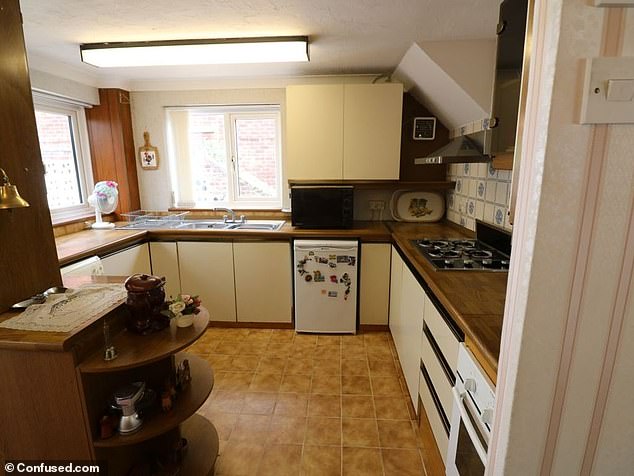 Sarah said they purchased a secondhand kitchen from eBay for £850, including units, sink, built-in fridge and freezer, and a cooker. Pictured: The kitchen, before renovation 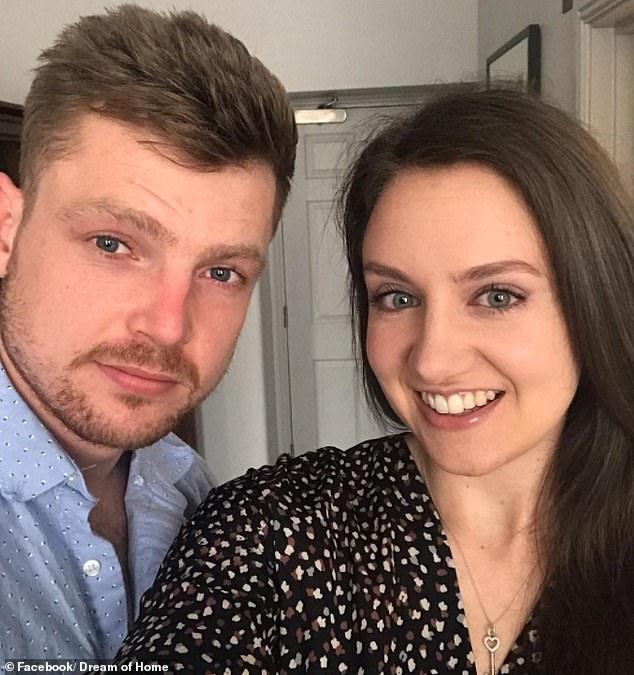 Sarah who runs the blog Dream of Home, said they began the renovation by ripping out the previous homeowner’s kitchen. Pictured: Jay and Sarah

‘I would absolutely recommend looking at second-hand kitchens if you have a budget you wish to stick to,’ Sarah told Confused.com.

‘Our kitchen was a bargain purchase on eBay for £850 and it came with all the units, the sink, the built-in fridge and freezer, and the range cooker. We ripped it out of the previous homeowner’s kitchen and then installed it into our own.’

‘The old kitchen came out in two days because it was so awful and falling apart. The new one took a while to install because my husband did this himself, but this saved us £1,500 on installation. He did all the research for it.

‘It took a week to install the new kitchen, but we weren’t living in the house so that was fine.’

When the couple moved in, and electrician family friend did some work on the house such as installing a new electrics board and taught Jay as he went along.

‘Jay is a mechanical engineer so he learns fast, particularly practical jobs like wiring. It meant he did the rewiring for the kitchen himself and then had it checked and signed off by the electrician,’ Laura said.

The floor needed levelling too, which we paid a couple of hundred pounds for. 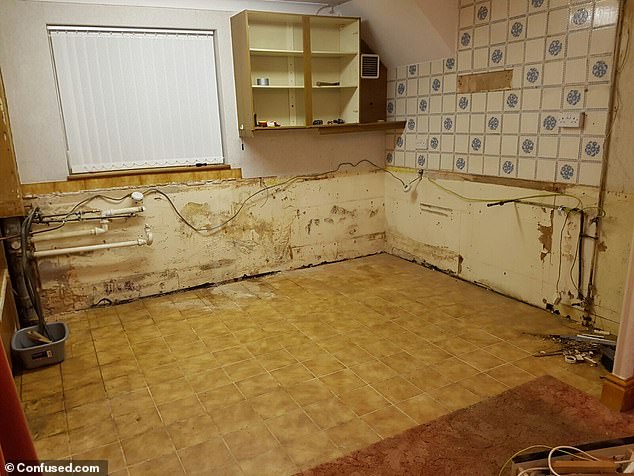 Sarah said removing the old kitchen took two days because it kept falling apart and installing the new one took awhile because Jay did it by himself. Pictured: The kitchen, before 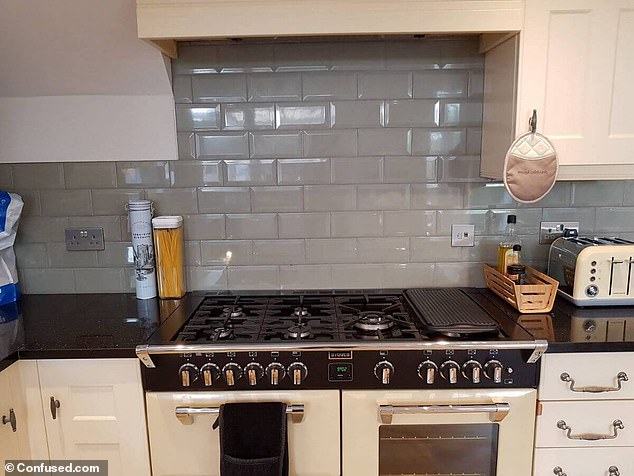 Sarah said they paid a couple of hundreds for their flooring and hired someone to fit tiles in the kitchen. Pictured: After

‘Then we purchased the tiles and had someone fit those, and paid for the flooring and paint.

‘Plaster, floor leveller, laminate flooring, wood and plasterboard to create a stud wall to block up the old doorway behind the cooker, and lots of paint!

Sarah who runs the blog Dream Of Home, admitted the renovation process was challenging, saying: ‘We were renovating the house during the winter and it was really tough going. When we were doing the electrical work so there was no lighting, no heating and it was pitch black outside.

‘I don’t think there is an easy part of renovation though – it’s always time consuming, especially when doing it yourself, and it’s hard, dusty work. I quite enjoy painting, so I think the easiest bit for me would be painting the walls.’ 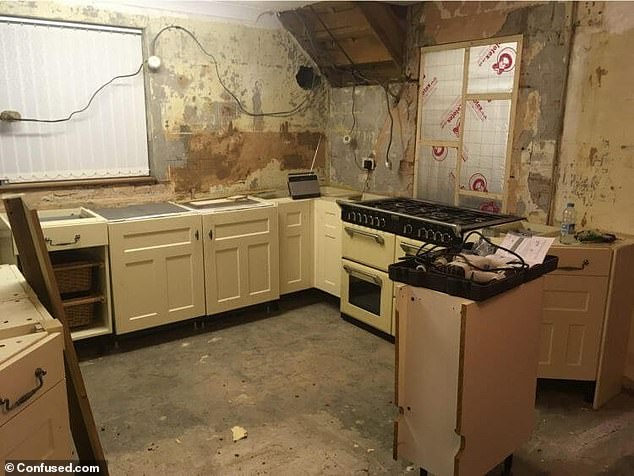 Sarah said renovating the kitchen during winter was difficult because they didn’t have lighting or heating. Pictured: The kitchen, during renovations 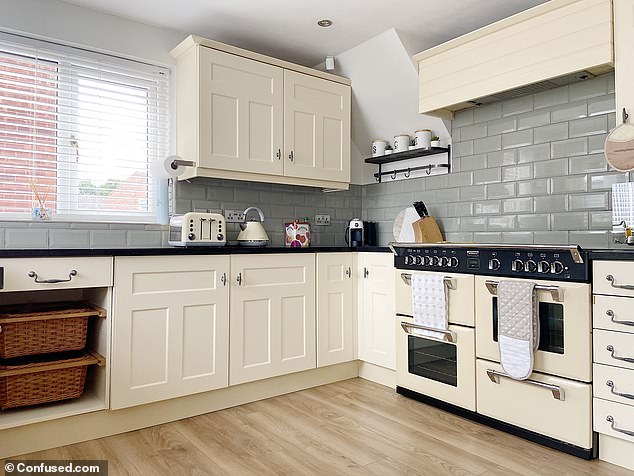 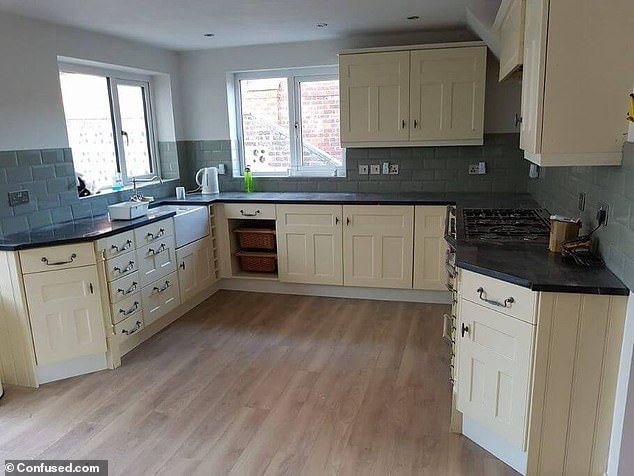 The kitchen units after being installed. Sarah said the couple learned what to do by trial and error and watching YouTube videos

According to research by Confused.com, the kitchen is the most popular room to renovate and on average Brits spend £5,219 on overhauling the room.

They’ve also found the conservatory and bathroom are areas where people are willing to so splurge, with an average spend of £3,550 on conservatories and £3,340 on bathrooms.