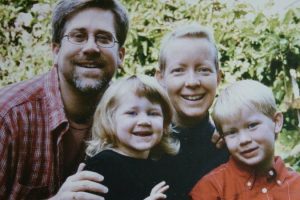 The “thin place” is a Celtic Christian concept but most of us know the feeling. It’s a place on Earth that feels spookily close to (let’s call it) Heaven. We typically feel it in places of worship: the cathedral, the mosque, the wat, the temple, Stonehenge, Uluru, the Grand Canyon, the local graveyard … but it can take us by surprise too.

American poet Charles Anthony Silvestri (Tony to his friends) adds hospital rooms to the list. “They’re numinous places,” he says. “Places strong in the Force, as Yoda would say.” After he lost his wife, Julie, to cancer in 2005, he began to dwell on a more permanent, ever-present thin place, an invisible veil through which we can almost touch the other side. 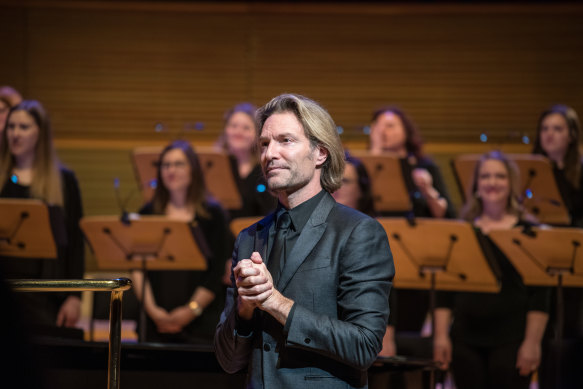 Choral composer Eric Whitacre at the world premiere of The Sacred Veil.Credit:Jamie Pham

His friend Eric Whitacre, the renowned American choral composer, found this thin place on his piano. Middle C. Just a couple of notes south of dead centre on the keyboard. “Can you hear that?” he asks, as he plays a soft, strangely transporting four-note phrase straddling either side. “Tony was talking about these holy places and that connected with me deeply,” he says of their latest collaboration, a choral work of 12 movements called The Sacred Veil.

“With each piece that I write, I eventually come to what I call my golden brick … often a chord, just a collection of notes, that for me has all the DNA of the entire piece in it.” He plays the phrase again: four notes borrowed, he reveals, from a Frank Martin Mass.

“The way that I ended up structuring them is that middle C equals the veil. The first thing that the cello plays is the veil. And it’s also the last thing that we hear, and then throughout the piece there’s this game being played … That third [interval] that reaches up above middle C and comes back, that’s Julie’s theme. And then these two notes that play down below … that’s those who have passed.

“It took me a while to come up with that,” he says with a laugh. “Usually what I do is I really overthink it … the best solution is incredibly simple.” 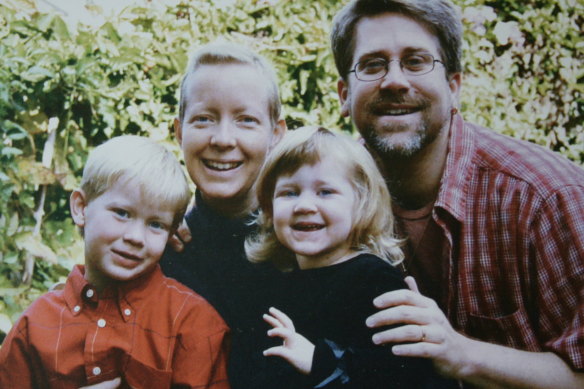 Tony Silvestri with his late wife Julie and their two children.Credit:

Simple, but deep. Ethereal, but precise. Unknowable, but right there at your fingers. It’s a weird conversation to be having by Zoom with a couple of strangers on a Thursday morning. But we don’t talk enough about death, we all agree, and that’s partly what makes it so traumatic.

“What do you mean by that, bud?” his friend asks tenderly.

“I think a good death is one where you are at peace with what’s happening to you. You’re not in denial. You’re not trying to fight. There comes a point where you decide it’s time … and you pass. That, I think, is a good death.” 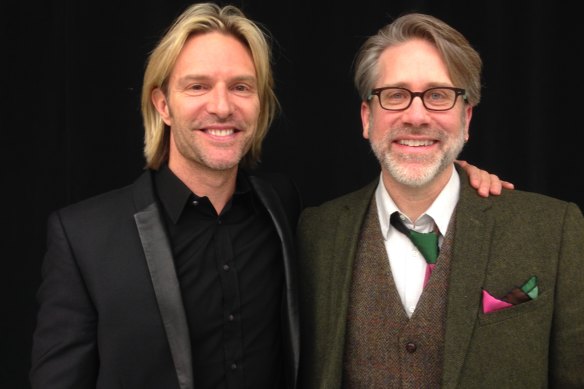 Whitacre and poet Tony Silvestri, who have collaborated on The Sacred Veil.Credit:

Julie was 35 when she died from ovarian cancer, leaving Tony and two young kids. More than a decade later he showed his old college choir buddy a eulogy he’d written. “Whenever there is birth or death/ The sacred veil between the worlds grows thin and opens slightly up/ Just long enough for Love to slip/ Silent, either in or out of this, our fragile, fleeting world.”

Whitacre heard music in it on first reading. He asked for more. You Rise I Fall came next, then joyful verses about first love and commitment, and more anxious and sombre ones about diagnosis and worse. As the arc of the story emerged in all its beauty and horror, it was decided that Julie’s voice needed to be heard too.

“We had this magnetic thing where you move the words around on the refrigerator,” Silvestri remembers of their early years together. “I have no memory of those messages getting any more profound than just little communications between spouses. And then when I read those poems, especially the one that ended up in the work, I was just blown away.”

The movement titled Magnetic Poetry that Julie had copied into her journal was from the time they were having trouble conceiving. “But the spring life force is so near,” she wrote, as if reaching to her unborn children. It was an act of foreshadowing that would seal the concept in her husband’s mind.

“It’s immensely personal and very vulnerable,” he says of the work, which received its New York premiere in 2020. “Sometimes I feel like the audience is focused on me, but in a good way, in a kind of supportive way … The first few movements are a joy to listen to, over and over. And then when it turns dark, I remember those days. I conjure it in my mind when the performance goes there.”

The Sacred Veil was co-commissioned by Monash University, the Los Angeles Master Chorale and the Netherlands Radio Choir. Here it will be performed by the 24-voice Trinity College Choir and 16-voice Polyphonic Voices. Elsewhere, much smaller and larger ensembles have taken on the work, always to immense emotional effect, the composers say.

“It becomes an experience, it becomes a liturgy,” Silvestri says. “The audience … they bond with the singers in a different way than any other work. It’s a visceral thing. And it’s not something that you can explain or predict, it just sort of happens.”

Whitacre adds that he was “wholly unprepared for the number of people who actually have experienced cancer, either themselves or somebody directly. It’s staggering to me that that’s a common theme amongst audiences. I never was prepared for that.”

“We’ve all experienced grief in one respect or another,” his friend says. “Yes, this is Julie and my story. But I think because we approached it in such a simple, elemental way, experiencers of the work, participants in its ministry, can latch on their own grief, their own story, and let it have some curative property to them.”

The Sacred Veil will be performed on September 7 and 8 at Alexander Theatre, The Ian Potter Performing Arts Centre. Eric Whitacre will also present a choral workshop on September 6.

Your essential guide to the best things to see and do in and around the city. Sign up to our Culture Fix newsletter here.