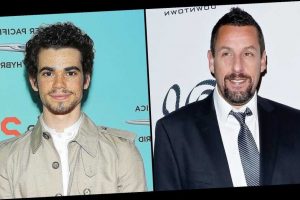 The spooky comedy debuted on Netflix on Wednesday, October 7, and shows an image of the young actor before the end credits start to roll. “In loving memory of Cameron Boyce,” the message reads. “Gone way too soon and one of the kindest, coolest, funniest, and most talented kids we knew. You live on forever in our hearts and are truly missed every day.”

Sandler, 54, told Yahoo Entertainment earlier this month that Boyce, who previously played comedian’s son in 2010’s Grown Ups and 2013’s Grown Ups 2, was expected to join the cast of the Netflix comedy before his untimely death. The Disney actor died in July 2019 after suffering an epileptic seizure in his sleep. He was 20 years old.

“It is with a profoundly heavy heart that we report that this morning we lost Cameron,” a spokesperson for the Jessie alum’s family told Us Weekly at the time. “He passed away in his sleep due to a seizure which was a result of an ongoing medical condition for which he was being treated. The world is now undoubtedly without one of its brightest lights, but his spirit will live on through the kindness and compassion of all who knew and loved him.”

The statement continued: “We are utterly heartbroken and ask for privacy during this immensely difficult time as we grieve the loss of our precious son and brother.”

Shortly after news broke of Boyce’s death, the Saturday Night Live alum issued a powerful message of support for the California native’s loved ones. “Too young. Too sweet. Too funny. Just the nicest, more talented, and most decent kid around,” Sandler tweeted in July 2019. “Loved that kid. Cared so much about his family. Cared so much about the world. Thank you, Cameron, for all you gave us. So much more was on the way. All our hearts are broken. Thinking of your amazing family and sending our deepest condolences.”

As they continue to mourn, the Descendants actor’s family and former colleagues are working hard to preserve his legacy through the Cameron Boyce Foundation, which seeks to educate young people about epilepsy and advocate for other issues that Boyce held close to his heart. In May 2020, on what would have been the actor’s 21st birthday, fans raised nearly $50,000 for the organization in his honor.

Earlier this month, Boyce’s former Jessie costar Skai Jackson dedicated her performance to her late friend on Dancing With the Stars with partner Alan Bersten.

“We just really built this bond for years and years and years and he was kind of like a big brother figure to me, you know, and always looked out for me through everything,” the 18-year-old recalled. “He really molded me into the person I am now. Of course, I miss him every day. … It just makes me a little bit sad, of course. He’s not here, but I know that he would be really proud of me. … I’m just really glad that he’s here to watch over us.”

END_OF_DOCUMENT_TOKEN_TO_BE_REPLACED

END_OF_DOCUMENT_TOKEN_TO_BE_REPLACED
We and our partners use cookies on this site to improve our service, perform analytics, personalize advertising, measure advertising performance, and remember website preferences.Ok