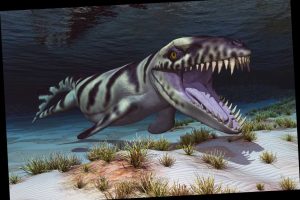 Meet the ‘terror crocodile’ that once roamed the US: study

6-year-old in serious condition after crocodile attack in Mexico

New research by UK scientists at the University of Bristol adds to evidence that the mighty crocodile has existed largely unchanged for 200 million years, having outlasted the dinosaurs and countless other plant and animal species that were wiped out by an asteroid that smashed into the Yucatán Peninsula 66 million years ago.

It’s their environmental versatility and physical efficiency that has allowed them to survive mass extinction and two ice ages.

“‘The crocodiles landed upon a lifestyle that was versatile enough to adapt to the enormous environmental changes that have taken place since the dinosaurs were around,” said lead study author Max Stockdale. “This could be one explanation why crocodiles survived the meteor impact at the end of the Cretaceous period, in which the dinosaurs perished.”

Unlike most animals, crocodiles thrive in both terrestrial and aquatic ecosystems, with the ability to hold their breath for up to one hour. They do best in warm conditions, as the cold-blooded reptile relies on external factors for thermoregulation, and can survive months or even years without food, drawing energy from the sun and laying low while they plan their next meal.

Their bodies are rugged and tough, built to sustain significant injury. In fact, it’s not uncommon for one to lose its legs in a battle over territory, then go on to live a long life of between 70 and 100 years.

Crocodiles have gone through evolutionary changes, but their transformation has occurred as a “stop-start” pattern, in which broad-stroke changes to the species occurred in spurts during more favorable ecological conditions, according to the new research published in Nature Communications Biology.

“It is fascinating to see how intricate a relationship exists between the Earth and the living things we share it with,” said Stockdale.

For example, the warm climate during the age of dinosaurs was the perfect setting for a variety of crocodile types to evolve: giant crocs, vegetarian crocs and serpent-like marine crocs, to name a few. These specialized versions ultimately gave way to the more streamlined species of today, which is why they’ve been dubbed the “ultimate survivors.”