How this three-ingredient recipe will banish and kill bathroom mould 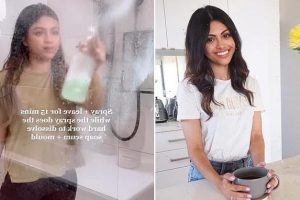 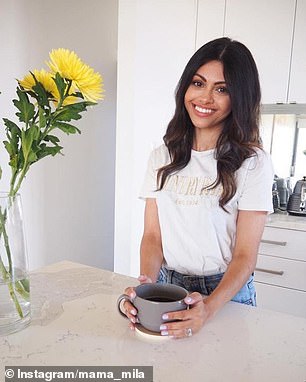 An organised mum-of-two has shared her inexpensive homemade mould killing spray, and it only requires three ingredients.

Chantel Mila, from Melbourne, mixes white vinegar, dish soap and essential oils to remove mould from areas such as the shower, and prevent it from returning quickly.

She revealed that clove oil is the secret ingredient she uses to kill mould spores before you can even see them.

‘Here’s the simple way to remove mould from your shower every time you clean it, and the trick to keeping mould away for longer,’ Chantel said. 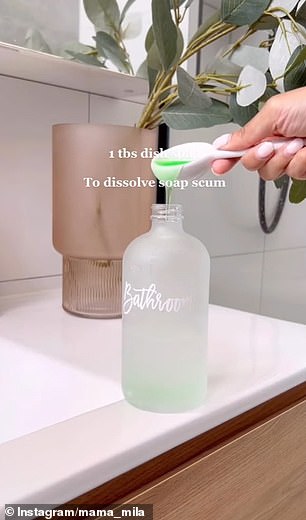 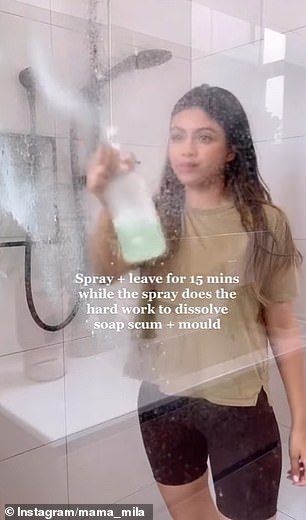 The cleaning expert  mixes white vinegar, dish soap and essential oil to remove mould from areas such as the shower and prevent it from returning. She revealed that clove oil is her secret ingredient that kills mould spores before you can even see them

She mixes one cup of white vinegar, with one tablespoon of dish soap and 10 drops of clove or tea tree oil.

She explains that the acidity of the white vinegar helps it cut through the grime, the dish soap dissolves soap scum, and the clove oil removes mould from the shower and kills spores.

She sprays the solution around her bathroom, including on her tiles, shower, walls and glass surfaces.

The mum then leaves it for 15 mins to let it soak in before cleaning as usual.

She uses a Ryobi scrubber from Bunnings to thoroughly clean her tiles and grout with the spray as grout can have a mould buildup.

‘Clove oil is amazing at removing mould from around the home, and doesn’t only get rid of the mould you can see, but also the spores that you can’t, which keeps it away for a longer time,’ Chantel said.

‘This mix is great for bathrooms and windowsills to clean and remove mould at the same time.’

In a spray bottle mix

Spray around your bathroom and leave for 15 mins. Clean as usual.

However, the mum advised using discretion if you have pets or small children when using any essential oils as some can be toxic.

Followers of the expert cleaner were thrilled with the tip, Chantel said they had been asking for mould advice for a long time.

‘Mould is a hard thing to get rid of, but I’m trying this!’ one woman said.

‘Vinegar is the best for mould,’ another wrote.

How to look out for mould:

Mould thrives in damp, dark and humid areas, it may also enter a property through open doors, windows or bad ventilation systems

Where should I check for mould?

* Bathroom – particularly around the shower

* Visible mould – mould can look like soot or dirt,  white and thread-like or in clusters of black, dark green, grey or brown rings or spots