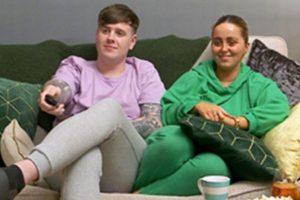 Binge-watching TV is easier than ever and the popularity of Gogglebox is at an all time high.

So, becoming a regular on the Channel 4 hit show is understandably a tempting thought for homes across the country.

The eclectic mix of families with their hilarious reactions to the week's TV has entertained us all since the programme began nearly ten years ago.

With such an amazing mix of people and backgrounds, there is a lot of effort and thought that goes into selecting the families that many might expect.

Unlike The X Factor and Britain's Got Talent, the producers go out and search for the next potential national treasure.

People may see success stories of personalities like Scarlett Moffatt and believe they too could become a star by just being filmed watching TV.

However, to become a regular on the show newcomers must be carefully handpicked by the show's producers, as has been the way since the show's birth in 2013.

The newest couple to appear on the unique programme are Scottish pair Roisin and Joe.

According to Channel 4 Joe, 25 and Roisin, 23, "are a couple who have been together for four years and live at Joe's family home in Glasgow, having moved in together at the beginning of lockdown."

The latest armchair critics have been signed up following pressure from Douglas Ross – yes – the Scottish Conservative leader, who made a comment when he spoke at the Westminster’s Scottish Affairs Committee in September.

The MP suggested his family could perhaps appear on the unique reality show.

When fellow members of the crowd began chuckling, Douglas told the Committee: "The response from my colleagues in the committee room suggests that is not a viable option."

Chief executive of Gogglebox Alex Mahon told MPs in September that, "it would be better to have a Scottish family" on Gogglebox.

She also wrote in her letter: "We have agreed a separate budget for a dedicated casting team specifically tasked with finding a suitable Scottish family".

The TV boss added: "The casting period is already under way and will run up to Christmas.

"The ambition is to identify at least one Scottish family who will become part of the Gogglebox cast for the next series, which will air in the new year."

The show's boss underlining how much care and effort goes into hiring the personalities on the show.

Representation and comedy value are all traits that are considered, but the show's bosses are most of all looking for people who act naturally while having their feet up watching the box.

A Channel 4 spokesperson confirmed last year: "We are not currently casting and there is no way to apply to be on Gogglebox."

"Everybody on Gogglebox has been found and persuaded to be on the show and I think that’s the key to why they are likeable and why the show works, because we get to know these people," said the show’s creator Stephen Lambert said back in 2015.

"We’ve never advertised for people on Gogglebox", he added.

A specialist team goes up and down the country – including Scotland – on the hunt for the next Pete Sandiford or Izzi Warner.

Those that make it onto the programme don't get paid a salary, but The Sun understands a household allowance of around £1,500 is paid each month.

Whoever's starring on the show can spend that allowance on whatever they like.

But, some tasty treats are also thrown in by producers for the casts two lots of six-hour shifts.

Dave and Shirley Griffiths are a couple who indulge in other treats to maintain their concentration while watching the week’s television.

Shirley explained in a recent interview: “Sometimes me and Dave have a little bit too much… We get a little bit drunk!”

They keep their spirits up filming a long day in their home of Caerphilly, South Wales, with a little bit of help from the booze cabinet.

A classic day's filming starts when the crew turn up on a Sunday and start filming about 3pm, “we get some snacks in as we’ve got a pretty long watch. Things like crisps, nuts, chocolate”, Dave said.

Due to the nature of the show, most the families haven't met yet. Due to the success of the programme, they are able to meet up at such events as National Television Awards.

He explained : “I’ve spoken to them on social media – wished them happy birthday, and they posted different things which I commented on. And we’ve had replies from them. But it’s funny, having never met them.

Perfectly summarising the beauty of the show: "I suppose like the rest of the nation, you feel as though you know them anyway. It’s a weird setup!"

To stay up to date on all the latest news on Gogglebox and more of your favourite stars, sign up to OK!'s daily newsletter.