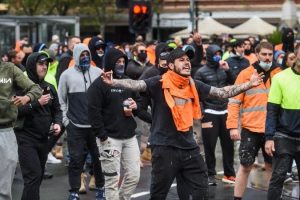 Just before the barrel-chested John Setka strode out of the CFMEU’s Melbourne office to speak to his members at the construction protest on Monday, a man in the crowd wearing a union hoodie was bellowing an anti-vaccine mandate message through a megaphone.

“We swear by the Southern Cross to stand true by each other and defend our rights and liberties,” the man said, stopping to read from his phone. “Support your members or we won’t support you.” 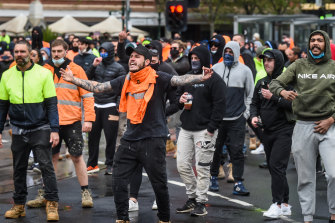 Tempers reached breaking point on Monday, the first of days of protests.Credit:Justin McManus

Setka emerged soon after. The crowd erupted as he tried to calm down the throng. Minutes later the megaphone was broken over the head of protester by a retreating union official as the furious crowd rushed the office.

That violent melee, and the days of ugly protests that followed, made plain that tensions in the building industry over the rapidly imposed jab mandate announced on the preceding Thursday had reached a fever pitch. But they also shone a light on the broader question of where unions stand on the sometimes uncomfortable topic of workplace vaccine requirements – and what happens to those employees who don’t comply.

That question inside and outside the unions is becoming more urgent. Last week, as the Andrews government shut down the building industry for a fortnight, it also announced teachers would have to be fully vaccinated by November 29 and signalled a similar move was coming for police.

NSW has taken an aggressive approach to vaccine mandates. Teachers will need to have had two vaccine doses by November 8, police officers by November 30 and since early last month, essential workers including builders from the council areas where cases were highest have had to get vaccinated to work outside the area. All healthcare workers need their first jab by Thursday and their second by the end of November.

The state’s roadmap out of lockdown also suggests only people who are double vaccinated will be allowed to live something approaching a normal life, with restaurants, galleries, gyms, and pubs still closed to the unjabbed when the state is 70 per cent vaccinated – and potentially beyond 80 per cent, too.

So far those measures have not triggered street protests anything like the Melbourne explosion. Setka is loudly pro-vaccine and has branded the protesters “drunken morons” unrepresentative of the union movement, but several state branches of the CFMEU along with the electricians, manufacturers and plumbers’ unions have also declared their opposition to mandates.

“I think it should be a choice of people … Because some people have a genuine legitimate fear of it,” Mr Setka said last week. Yet that view represents only a small fraction of the union movement, which is broadly against employer-mandated vaccines but agreeable to those imposed by the government on the basis of health advice. 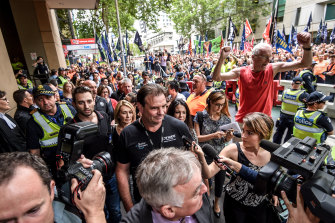 CFMEU Victorian secretary John Setka, centre, photographed in 2018 before the unions had to grapple with coronavirus jab mandates.Credit:Justin McManus

The numbers tell the story. Setka’s branch of the CFMEU declared 28,031 members across Victoria and Tasmania in its last report to the union regulator. The larger Construction, Forestry, Maritime, Mining and Energy Union, of which the CFMEU representing building workers is a part, counts 148,006 members.

The nurses, teachers, public service and shopworkers unions are all larger, collectively making up about half the country’s unionised workforce of 1.5 million. Each has caveats on mandatory jabs: there should be consultation, sufficient supply, education, paid leave and appropriate exemptions but ultimately, if governments mandate it on medical orders, those unions support it. None agree with jabs required by individual employers.

With the exception of the retail union, they represent a higher percentage of their industries than the CFMEU does in construction, where its membership comes primarily from large-scale building projects such as apartments, rather than home renovations or civil infrastructure projects.

Emergency services unions too have largely agreed to jab mandates once key conditions such as exemptions are worked out. The police associations in Queensland, NSW and Victoria have all supported vaccine mandates for the force, which is a proposal in Victoria but already a rule to the north.

“The majority of our members have called for the prioritisation of vaccine to police,” a spokesman for the Victorian Police Association said. “Should Victoria Police require the vaccination of our members, we would support that decision.”

Tony King, president of the NSW Police Association, said he had no debate with the police force’s vaccination order, but noted “there is a provision for exemptions to the requirement”. That includes both medical exemptions and other valid reasons that the police say will be assessed on a case by case basis. In Queensland, which has also mandated vaccines for police, officers who are not vaccinated or have an exemption will have to wear masks when they cannot socially distance.

It is a far cry from Qantas boss Alan Joyce’s declaration that unvaccinated staff at his airline will find aviation is “not the industry for them”, and suggests some of the thorniest issues and potential unfair dismissal claims are less likely to arise in the police.

No union has yet publicly filed an unfair unfair dismissal case for a member sacked for refusing a vaccine mandate and too much depends on factors such as how the mandate was implemented and the nature of the member’s medical conditions, to predict if they will.

The Fair Work Ombudsman makes clear that even where an employee is determined not to be vaccinated, that does not mean they can be sacked on the spot. It advises employers to consider finding alternative work arrangements, such as working from home, for staff who have a legitimate reason not to be vaccinated. Staff could also be stood down.

There have been some legal challenges run by others that suggest sackings based on jab mandates will be hard to challenge. Three cases where workers challenged flu vaccination mandates introduced at the start of the pandemic failed. In each case, the Fair Work Commission upheld the sackings. A NSW police officer, Belinda Hocroft also filed a case this year challenging the police mandate.

“Hocroft withdrew her application from court due to the impact that the proceedings would have on her career as a police officer,” her lawyer, Charly Tannous said. He dismissed reports circulating on social media, some of which suggest it had been settled in her favour and would set a precedent, saying they were “fake” and circulated by other lawyers hoping to drum up business. 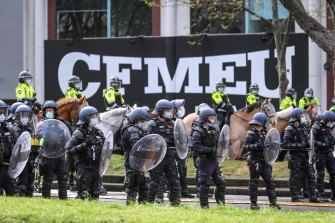 Police were forced to guard the CFMEU office in Melbourne after the protests. They are also among the next groups who will have vaccination mandated.Credit:Eddie Jim

Nonetheless, any cases the unions do take on will be a key test for the movement, marking out the unions’ view of what goes too far.

Melissa Donnelly, national secretary of the 125,000-member Community and Public Sector Union, says members of her union, such as meat inspectors, have had to get vaccinated for their health and safety for years. “Where there are clear public health requirements, the CPSU supports mandatory vaccination,” she says.

Correna Haythorpe of the 193,915-member Australian Education Union, declined an interview, but in a statement, she says: “We have consistently advised our members and the broader community to follow the public health advice, recognising it is the best way to keep the community as safe as possible. This remains our position on any vaccination policies or requirements.”

In NSW and Victoria, where vaccination mandates for teachers have been introduced, the union’s priority has been about getting jabs to its members rather than fighting against the rules.

Annie Butler, a registered nurse who heads the country’s largest union, was wary of the federal government’s aged care vaccine mandate, seeing it as a potentially politicised way of distracting from supply issues. But her view, as federal secretary of the 284,699-member Australian Nursing and Midwifery Federation is straightforward on the general issue.

When the health advice is clear, Butler says, “we adhere to the advice”. Her Victorian branch secretary, Lisa Fitzpatrick, was the most forthright union leader in criticising not just the violence of the protests, but their goal. “Stop fighting for the right to overwhelm our health system,” she said in an angry statement on Tuesday. 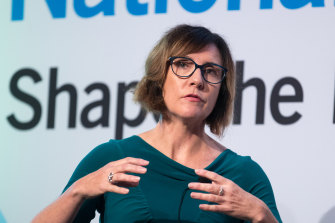 Annie Butler, federal secretary of the nurses and midwives union, said she found the protests very difficult to watch.Credit:Janie Barrett

Gerard Dwyer’s union, the Shop, Distributive and Allied Employees Association (SDA), is second in size only to the nurses at 217,475 members. The national secretary and treasurer argues the whole issue wouldn’t have come up with such ferocity had the government made jabs available sooner, to avoid anti-vaccination sentiment having time to ferment. But now that it has, Dwyer says: “The SDA supports mandated vaccination where it is introduced by government based on the advice of health authorities and after timely consultation with the union.”

That is broadly in line with the International Labour Organisation, which notes that vaccination is a matter of domestic policy, but emphasises the value of collaboration to bring workers along.

Anthony Forsyth, a labour law professor from RMIT University, says the unions’ memberships, industries and tactics have all played into the difference between most labour organisations and the more militant building unions on vaccines.

Some of the unions that are more in favour of vaccinations, such as the nurses, have a membership base that skews female and sees the consequences of severe coronavirus cases daily.

“Another relevant factor is general resistance of the CFMEU to regulation, and pushing the boundaries of industrial relations laws,” Forsyth says. The nurses union does not sell shirts bearing the phrase “if provoked, will strike” above a king cobra showing its fangs.

That approach has been successful for the CFMEU in some ways: its members generally earn high wages that have increased about 5 per cent annually in recent years.

But its aggressive tactics on building sites have also earned the ire of the Australian Building and Construction Commission, an industrial regulator focussed solely on that sector that has extensive coercive powers and has won millions of dollars in fines against the CFMEU. That, Forsyth suggests, may have further played into the union’s culture.

“The culture of resistance may have led some members to feel COVID rules, including vaccine requirements and community expectations, don’t apply to them,” says Forsyth.

Localised factors, such as an anti-Communist background o some in the Victorian CFMEU, may have played a role too as The Age and The Sydney Morning Herald reported last week.

Most international studies on mandating vaccines for various diseases in the last few decades have found that the measure works, but only if they are not so harsh as to trigger a backlash. That has already happened in construction, but the union’s diverse positions on jab mandates suggest it is not necessarily a guide to the wider workforce.