Home » Lifestyle » How to keep your sanity this Christmas

How to keep your sanity this Christmas

No phones! No Brexit! And top-notch booze! How to keep your sanity this Christmas (even if your brothers are driving you mad)

Oh, it’s going to be… interesting this Christmas in the Johnson family!’ If I had a milk chocolate mini-Santa for everyone who’s said that to me, I could start my own Advent calendar business.

My instinct is to close down the subject, but as it’s the most magical time of year, why not spread the joy? Given the inexplicable interest in our humble festivity, here’s my exclusive guide to a stress-free family Christmas.

But before I divulge my top tips, a confession: if it wasn’t already Christmas Eve, my generic advice is to make like a man — in other words, pretend Christmas isn’t happening, never bring the subject up until the last minute, don’t go shopping, and thereby force another woman to do all the emotional labour, present-buying, wrapping, cooking and general grunt work.

This approach has served me very well in the many happy years we have guested with one of my sainted sister-in-laws, when I try to overcompensate by being a tireless kitchen toto, always on hand to unload the dishwasher or make the bread sauce. 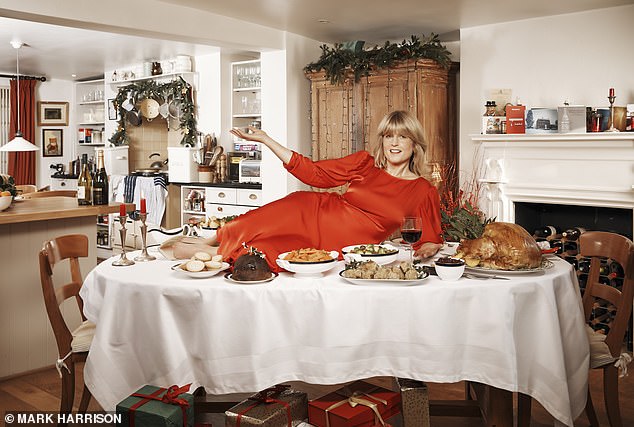 This year, however, I am hosting — a couple of brothers, a cousin and his wife, my kids and husband, and my mother and her carer; 12 in all.

In order for the day to run with Royal Household smoothness, here are my top tips for the similarly burdened — I mean blessed — hostesses (and hosts) out there.

Around the time that little children all over the country are asking, ‘how many sleeps till Santa comes, Mummy?’ and toddling on to school stages dressed as Yonder Star or the Yule Log, I send out my annual Christmas Message full of seasonal cheer to the Famiglia Johnson WhatsApp group. This is a stern reminder that we must not buy each other presents.

Think about it. If you are a family group of, say, 22 (as we were for the past two years under my older brother Boris’s roof), and everyone buys just one piece of cheap tat — I mean present — for everyone in the house, that’s almost 500 presents for folk to wrap and place under the tree. Then unwrap and leave lying around.

The problem is, this is the time for giving, etc., and my diktat is often observed only in the breach.

Last year, for example, I picked up my mother to convey her to the clan gathering and she brought eighty presents with her that I had to somehow stuff into the back of the Volvo.

After that, every time I saw her with a mail order catalogue in one hand and a telephone in the other from September onward, I staged a gentle intervention.

My idea of hell is people arriving and ‘dropping off’ bags of bulky presents for my loved ones in the hall, and my idea of heaven is someone coming into my house and selecting a large object to remove from my sight for ever. 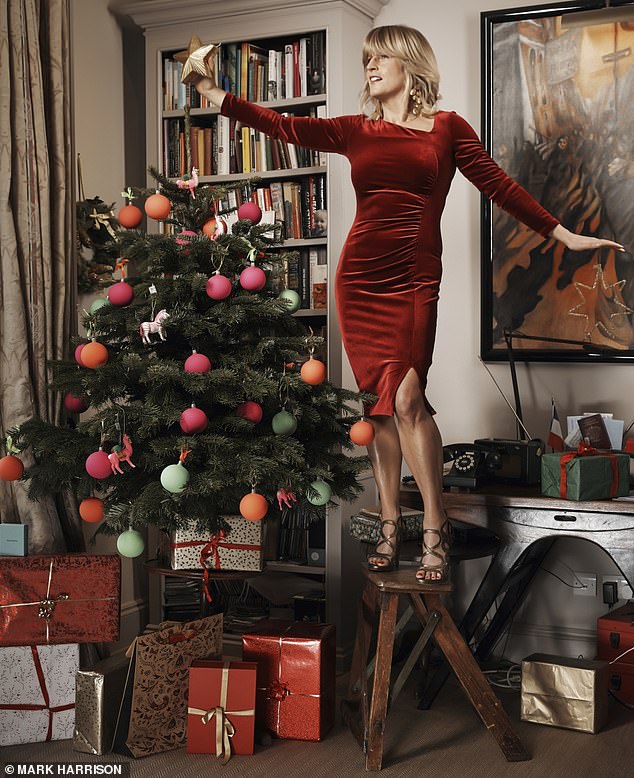 Or socks. My husband’s family source each other generous presents selected with love and care, such as paintings or amusing hats, whereas the Johnsons have a tradition to give each other books they’ve written themselves. Or, failing that, socks — to such an extent that my husband’s name for a Johnson family Xmas is ‘Sockmas’.

Given my fear of stuff, my house rule for Christmas is: everyone is free to give presents to their own children and spouse if they must, and other loved ones a choix, under-18s and godchildren, but beyond that, only edible gifts, and, obviously, huge amounts of really top-notch booze.

If someone arrives with a present for you and you haven’t got a present for them, don’t be embarrassed. Let them bask in the knowledge that it is ‘always better to give than receive’.

Issue strict, detailed and non-negotiable instructions about contributions, timing, and assistance for Christmas dinner by around mid-December. You cannot afford to be vague — you don’t want two dishes of cranberry sauce and no crackers.

For example, one year, when I had two small children plus a newborn baby, an aunt asked what she could bring. I said something we could have with champagne upstairs while the bird was resting (as Delia would say) and I was making gravy, boiling sprouts, warming plates.

Category error! When this aunt (she knows who she is) arrived at 1pm, to my horror she thrust some packets of smoked salmon in my hands. Memo to self: what I should have said was, ‘Please can you bring a platter of something, like smoked salmon blini, we can just hand round’ and the crisis would have been averted.

Make it very clear it’s your way or the high way when it comes to the centre-piece of the feast.

Frown if anyone dares to utter the words ‘goose’ or ‘beef’ or ‘ham’, as the whole point of the dead period between Christmas and the New Year is to eat turkey leftovers and ham and mince pies for every meal for a whole week.

Everyone stresses like mad about Christmas dinner, but if you break it down, it’s a Sunday roast. Only three things really matter.

I advise you to delegate one person simply to be on spud duty, from peeling to roasting, because there is nothing more disappointing than a soggy roast potato. My husband assumes the mantle for this important role on the day. 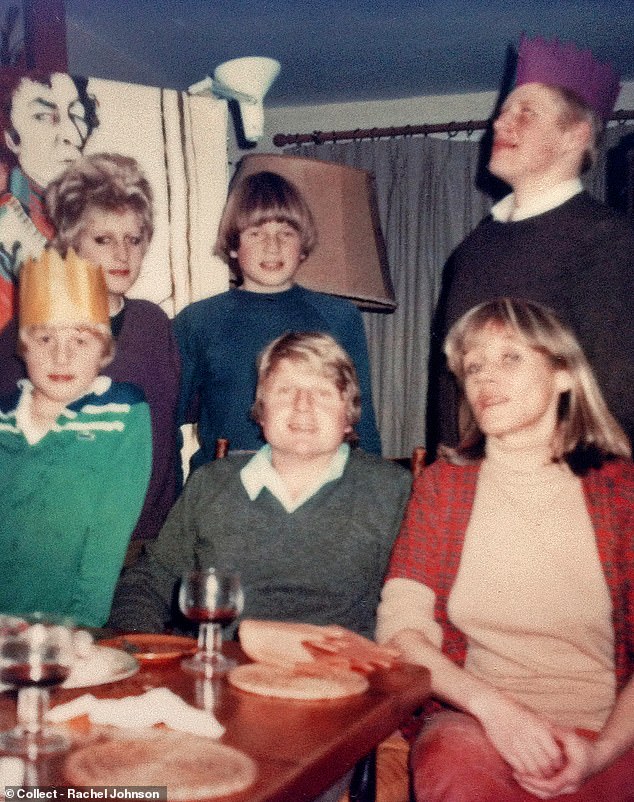 Luckily, turkey gravy is a doddle (my tip is to deglaze the tray with a generous slosh of white wine), and it’s harder than it looks to under-cook a turkey (I like butter and bacon all over the breast, and a butter-soaked muslin). Trimmings are easy to delegate and guests are only too thrilled to contribute (or they bloody well should be), so always have something to say when asked ‘what shall we bring?’ as well as ‘what can I do?’

My mother is bringing the Christmas pudding and brandy butter (‘Just buy them from Waitrose or Marks & Spencer,’ I said, as if she would really set about making figgy pudding from scratch herself). Others are bringing wine, champagne, chocolates and crackers.

I don’t like my husband underfoot until it’s time for table laying and potato roasting, so he enjoys long pleasurable sorties into gentleman’s London around St James, to source crucial items such as crystallised ginger, port and Stilton from places like Fortnum & Mason and Jermyn St. He then returns, hours later, in triumph, clutching some candied chestnuts, during which time I will have wrapped 75 presents and made two stuffings with an air of pained-yet-noble martyrdom.

NO PHONES! NO BREXIT!

Someone sent me a Xmas card with a bunch of people sitting in paper hats and someone taking a phone call on a landline. ‘Yeah, all good here thanks,’ he’s saying. ‘We’ve had the meal and we’re just getting ready for the argument.’

It will not surprise readers to hear that we try not to talk about Brexit at the table, which is, if you think about it, traditional.

It was considered very bad form to talk about politics or religion over meals in days of yore, and the last thing anyone (i.e. me) wants after they dished up the festive feast is to have several grown men going shouty crackers about the Irish backstop or what should be on the ballot paper for a second — even third — referendum.

Even talking with mouths full about the moistness of the bird or the crunchiness of the roast potatoes is preferable.

As my friend Marina says, if someone could invent a medicine that would stop people talking about Brexit at Christmas, supplies would have run out by now.

A good tip is to put a swear box on the table, and every time someone mentions the B-word they have to put in at least a fiver for charity.

My other tip is to suddenly clap your hands and cry, ‘Crackers!’ if things start going pear-shaped conversationally, and allow the loud bangs, spilt drinks, weak jokes to provide a welcome diversion from the blessed will of the people. 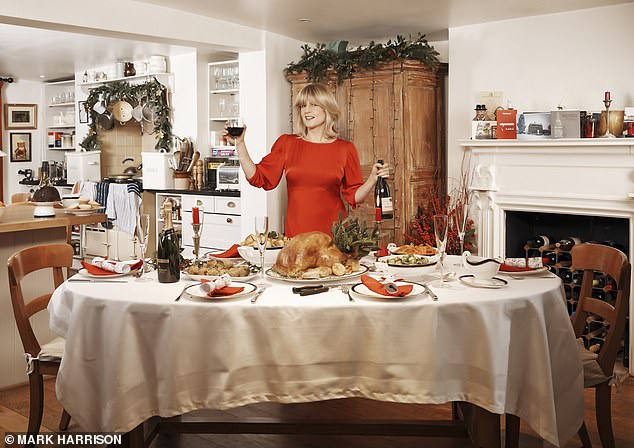 Rachel (pictured) revealed she doesn’t like the excess about Christmas including over-eating, pointless presents and wrapping paper

I am braced for our festivity to be a bit Brexmassy too, though, especially after drink is taken, which it will be. But the truth is, Johnsons are very greedy, and once we have our mounded platefuls in front of us, all we want to do is get our heads down into our nosebags.

Anyway, small talk is pointless. We know where we’ve come from, we know what we all do, we know whether we’re Leave or Remain and our views on the Withdrawal Agreement, so we shut up and eat. If we do big talk at all — as in the B word — we save it for long walks. Far safer.

But to be honest, soothing, time-soaking board games like Scrabble or bridge are preferable to talking about the ongoing political crisis that has rent our family and, indeed, so many other families across the whole country.

No phones are allowed at table apart from for photographs to record the wreckage of the groaning board, the flaming pudding and the family wearing silly hats.

DON’T LEAVE THE CLEAR-UP UNTIL THE MORNING

I love clearing up, as, like many women, I believe only I do it properly. My husband is one of those men who says: ‘Let’s leave it till the morning.’ But I am incapable of such slobbery. As soon as everyone has gone, I pick the turkey meat off and start boiling up the bones for soup.

And that’s about it.

Oh, yes, I forgot: another tradition is that every year, my husband complains that I am ‘insufficiently Christmassy’ and goes on to say that ‘as a Johnson’ (a term he uses interchangeably to mean ‘someone who seeks attention like a moth to a flame’), I resent anyone else being celebrated, even tiny baby Jesus, on one magic day.

That’s not true. Or fair. I imagine I love Christmas as much as the next person, but thank God it only comes once a year.

I don’t like the excess, the over-eating, the wrapping paper, the pointless presents. But I’m not a Christmas denier. I love carols, the Christmas Day service, stockings and, above all, moist turkey and crunchy roast potatoes and all those leftovers to tide you over to the New Year.

Look, if I can get my holly jolly on for our family Christmas, this year of all years — so can you.

Have a very merry Christmas!