Home » Lifestyle » How’s the weather? I used to dread small talk, now I crave it

How’s the weather? I used to dread small talk, now I crave it 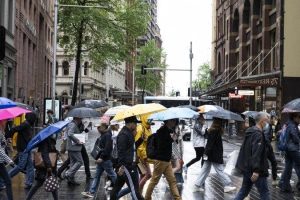 I was at the pedestrian crossing, waiting for the lights to change. It was 5pm in Glasgow and the sun had long set. I was tired from work and ready to get out of the rain. An older woman standing next to me caught my eye and smiled, both of our faces snug and squished inside waterproof hoods. “Just finished work have ye?” she asked. Earlier that morning, I’d left the gym at the same time as another member who’d commented, “Ahh, good start to the day!” The afternoon before, I’d been shopping while holding a takeaway cup. The shop assistant remarked “Got your coffee, aye? Me too!” and raised her mug as though we were saying cheers over a pint.

I didn’t know these chummy people and didn’t need to. It’s been said Glasgow is the friendliest city in the world and after living there for 18 months I know this to be true. My interpretation is that Glaswegians are considered friendly because they love a chat. They’ve mastered the art of small talk–and I’ve embraced it wholeheartedly, too.

If the words small talk send a chill up your spine or elicit a pained, guttural moan, you’re not alone. I used to be one of you, too. I’d avoid polite chit-chat with the same fearful intensity as a gazelle avoiding a cheetah. Partly due to anxiety, and partly due to being an arrogant 20-something (the good old days!). What’s the point of small talk, though? I’d think, choosing self-serve checkouts at supermarkets, and fumbling my way through parties with the same fearful intensity as a gazelle who has had too many alcopops avoiding a cheetah. 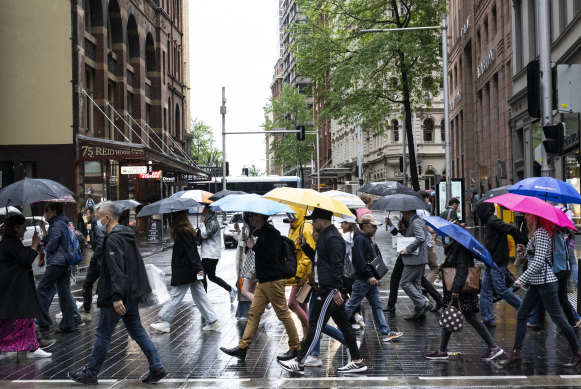 A rainy day in Sydney earlier this month.Credit:Louise Kennerley

Not every social interaction has to have a “point”. In fact, it’s refreshing when they don’t. By definition, small talk isn’t functional or transactional- and isn’t that great? Imagine if every single time we talked to someone, there was an underlying power struggle or agenda. We would no longer be humans, we would be robots. Or politicians. Or worse: robot politicians who have gained control of the world and are forcing everyone to surrender to their spooky mechanical proclivities.

Small talk is a conversational neutraliser: anyone can participate in a wee prattle. It cuts through potential divides such as age, gender and socioeconomic status. It doesn’t care whether you sleep on a collapsing single bed or live in a mansion with a host of butlers living downstairs getting up to hijinks (my understanding of wealth is fundamentally acquired from Downton Abbey).

The last few years have taken a toll on the world’s psyche, and I appreciate any opportunity to chat about something other than the horrors of life. Weather is a topic that gets a bad rap when really it’s a harmless way of acknowledging you’re walking around on the same ground as someone else. And I can’t get enough of it. Have you heard of this La Nina chick? She’s crazy! Ha ha yes, climate change is very real and it’s horrifying. I like your umbrella! And don’t get me started on a windy day – I’ve got at least 20 minutes of solid gear on how it’s perfect drying weather.

A common misconception about small talk is that it is a poor replacement for connecting with others, but it’s still a genuine conversation. You may have encountered people who explain their loathing for small talk by saying things such as, “I don’t want to know what you do for work or how you know the host, tell me your deepest darkest fears.” These people frighten me more than polite chit-chat about traffic congestion. Do they want to steal my soul? Why don’t they blink?

I don’t believe we can fast-track emotional intimacy, nor should we. Some people, myself included, take a while to warm up. Others choose to reveal truths about themselves within the realms of small talk because it’s safe and easy. Just as it would be exhausting if every exchange was transactional, it would be equally draining if every chat was a deep and meaningful one. No wonder psychologists ask if you found the office alright if you have plans for the rest of your day or why your heaviest sobs happen when you pay the bill. It’s a palate cleanser!

A friendly “how’s your day been?” from a stranger fills my social cup while getting me out of my head and into the world. I need these interactions as much as I need food, water and an army to fight robot politicians. It’s a microdose of human connection, a reminder we are part of something bigger – and it makes standing in the rain waiting for the lights to change a lot less lonely.