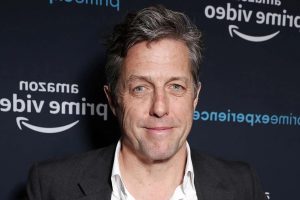 British humor! Hugh Grant made his first appearance at San Diego Comic Con for his role in Dungeons & Dragons: Honor Among Thieves — and had a lot of fun with some cheeky innuendos.

“Well, I was a Dungeon Master,” Grant, 61, said during a group interview with Entertainment Weekly on Thursday, July 21, referencing the player who leads the Dungeons & Dragons campaigns. “But it was more S&M and less D&D. It’s the English version.”

When asked later in the day by a panel moderator if he had any prior interest in the role-playing game before accepting a part in the film, costar Michelle Rodriguez quipped, “You mixed it up with S&M,” before Grant replied, “She’s not wrong.”

The Notting Hill star continued, “I’ve been an enthusiastic Dungeon Master for some years now. That’s a British pastime, [a] national sport almost. I believe that’s why [Francis Daley] and [Jonathan Goldstien] thought of me for this, my reputation.”

Grant joined the cast of the upcoming comedy adventure in March 2021, signing on to play villain Forge Fletcher. When asked why he decided to join the project, the Love, Actually star revealed that he is “notoriously negative” about scripts but “to my astonishment, I was sent a thing that really made me laugh,” comparing the campy action adventure to Monty Python and the Holy Grail, per The Hollywood Reporter, who covered the film’s panel on Thursday.

Best Rom-Coms to Watch When You’re Stuck at Home

The upcoming film, which also stars Rodriguez, 44, Sophia Lillis, Chris Pine and René-Jean Page, is based on the cult classic Hasbro tabletop fantasy game that first launched in 1974, and follows “a charming thief and a band of unlikely adventurers undertake an epic heist to retrieve a lost relic, but things go dangerously awry when they run afoul of the wrong people,” per the official plot summary from Paramount Pictures.

Despite his reputation as a premier leading man, Grant is no stranger to a NSFW scandal. In 1995, the Bridget Jones’s Diary star was arrested in Hollywood for soliciting sex worker Divine Brown. The actor pleaded no contest to a misdemeanor lewd conduct charge and was sentenced to two years probation. At the time, Grant had been dating actress Elizabeth Hurley for over eight years. The couple eventually called it quits in 2000.

‘Bridget Jones’s Diary’ Cast: Where Are They Now?

The Oxford College alum went on to tie the knot with Anna Eberstien in October 2018. The pair welcomed son John in December 2012 and two daughters in December 2015 and March 2018. Grant also shares daughters Tabitha, 10, and Felix, 9, with ex Tinglan Hong. However, prior to his nuptials with the Swedish TV producer, the Two Weeks Notice star was open about his distaste for matrimony.

“Do I think human beings are meant to be in 40-year-long monogamous, faithful relationships? No, no, no,” he told Howard Stern during an interview in 2016. “Whoever said they were? Only the Bible or something. No one ever said that was a good idea. I think there’s something unromantic about marriage. You’re closing yourself off.”