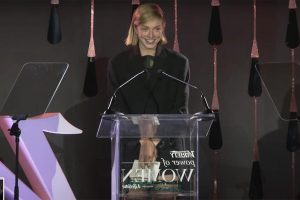 Hunter Schafer got to present an award tonight to her new friend— Ella Yelich-O’Connor, or, as the rest of us know her, Lorde.

But, before they were pals, Schafer was introduced to Lorde the same way we all were, she said in her speech while introducing the honoree at Variety’s Power of Women event: through her 2013 song “Royals.”

“Lorde’s debut album and song were everything. For so many young people like me, it felt like we had been found in the album and by its singer,” the “Euphoria” actor, model and LGBTQ+ activist said.

Schafer then went on to regale the audience with her personal connection to Lorde’s music, stating that there is a particular magic that women and femmes share, and that the New Zealander’s music helped her to discover her “inner power.” She mused that the album “Pure Heroine” acted as a map to find “our true essence,” and called that ability a “superpower” because young people are able to chase the magic through adolescence when they listen to her songs.

Schafer went on to note that, just last month, Lorde released her third album “Solar Power,” which Schafer described as a piece of art that “urges us to connect with nature and reset our priorities in a world filled with phones, social media apps and cameras.” She then recalled that Lorde had said in past interviews that her 2019 trip to Antarctica, which the singer took to reconnect with the planet, was one of the catalysts for creating the nature-filled record.

“In the past year, Lorde has used her powerful words, sounds, and presence to promote environmentalism and raise awareness about the growing issue of climate change. To so many of us young people, this is the crucial issue of our time,” Schafer continued. “How can we protect our planet and make it a safe place not only for us to live, but for our children and their children? How can we make these changes in the face of lost time?”

Lorde partnered with the organization 350 Aotearoa, the New Zealand arm of the international climate movement 350.org, for the event (presented by Lifetime), to help advocate for a ban on fossil fuels in the near future.