Home » Lifestyle » ‘I think she would have liked it’: Doco based on The Trauma Cleaner set to debut in Melbourne

‘I think she would have liked it’: Doco based on The Trauma Cleaner set to debut in Melbourne

The astonishing life story of Sandra Pankhurst, the founder of forensic cleaning company STC and the subject of Sarah Krasnostein’s award-winning 2017 book The Trauma Cleaner, is coming to the big screen. A documentary based on Pankhurst, Clean, has been selected as the closing-night film at the 70th Melbourne International Film Festival (MIFF) being held in August.

Director Lachlan McLeod spent three years on the film about Pankhurst, a transgender woman whose past lives included spells as a drag queen, a sex worker and a funeral director. 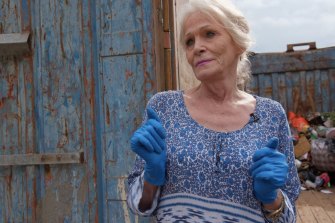 Sandra Pankhurst, founder of forensic cleaning service STC and the subject of the book The Trauma Cleaner, is now the subject of a documentary, Clean, which will debut at MIFF in August.Credit:Walking Fish Productions

They grew close over the course of filming, but Pankhurst won’t be there to see the final product. She died last July from a chronic pulmonary disease, which she believed was caused by the chemicals with which she had worked for decades.

“She never got to see it unfortunately, but I think she would have liked it,” says McLeod of his portrait. “I think it frames her in a very nice light.”

McLeod didn’t know Pankhurst’s story when he first saw her interviewed on SBS for a short piece about hoarders. “I hadn’t read the book, but I knew there were other sides to that work, and it seemed the people who worked in that world were really interesting in themselves – and that proved to be the case.”

Initially, it was the job that caught his attention. Trauma cleaners are the people who are called upon to tidy up after a murder, a suicide, a tragic accident, so that the scene can once again become viable for human use. But from the moment he met Pankhurst, “she was clearly the focus. She was funny, she always dominated the situation, but she was also quite sick.” 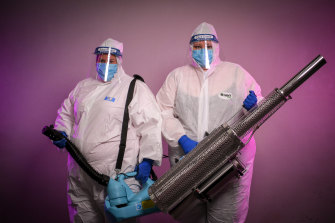 The trauma cleaners: Kate O’Sullivan (left) and Trudi Brown, who work for STC, the company set up by Sandra Parkhurst, with fogging machines.Credit:Eddie Jim

The first scene he and his crew shot with her turned out to be her last clean. Soon afterwards she became so sick she had to be hospitalised. “She wouldn’t admit that the end was near but everyone around her could see it,” says McLeod.

Pankhurst passed during COVID lockdowns, which meant many of those closest to her were unable to celebrate her life in a meaningful way. So McLeod is hoping the film’s MIFF screening will serve as a kind of memorial service of sorts.

Not that the tone is likely to be mournful, he adds. “The film is about how people like Sandra and the workers, a lot of whom come from tough backgrounds and have their own trauma, have a very optimistic lens. And because of that, they’re able to help other people through those situations – though it does come at a cost.”

In its first fully fledged live season in three years, the festival will open on August 4 with the coming-out coming-of-age drama Of an Age from hometown filmmaker Goran Stolevski, who has made 25 short films in 10 languages over the past 17 years and was in January named one of Variety’s “10 directors to watch in 2022”. 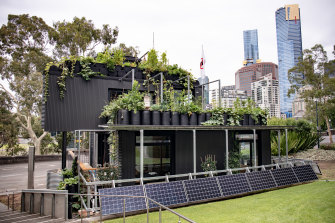 The Future Food System sustainability showcase home in Federation Square, in the heart of Melbourne’s CBD, is the subject of a documentary at MIFF.Credit:Liam Neal

Also announced in MIFF’s “first glance” selection is Greenhouse by Joost, a documentary about Future Food System, the experimental grow-your-own, waste-nothing house-cum-restaurant built by environmental activist Joost Bakker and occupied by chefs Jo Barrett and Matt Stone in the heart of Melbourne.

Fell director Kasimir Burgess turns his attention to the 1980s protest movement that put Bob Brown on the political map in Franklin, with Hugo Weaving narrating, while Margot Robbie lends her voice to Under Cover, a look at Australia’s housing crisis.

The full MIFF program will be released on July 12.