I tried everything bagel ice cream and here’s what happened 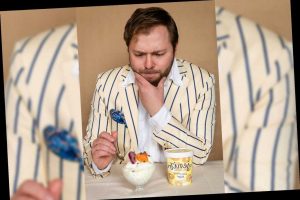 Over 11,000 ice-cream containers recalled for having metal shards

I didn’t mind having my bagel scooped but I wouldn’t really recommend it — even with the lox.

No, I’m not talking about my calorific workday deli order. I’m sneering at Jeni’s Splendid Ice Creams’ perplexing new “everything bagel” ice cream flavor, which pairs a cream-cheese base with “buttery streusel laden with sesame, poppy seeds — and yes, onions and garlic.”

Jeni’s calls it, “an ice cream acceptable to eat any time of day.”

“Acceptable” is the operative word here. To most patriotic Americans, dessert follows dinner, and onions plus cream equals dyspepsia.

As far as novelty flavorings go — we’re looking at you, pumpkin spice — this one’s for more advanced eaters. This is doubly true in its ice cream form.

Right now, the deli-inspired scoops are available at NYC gourmet grocer chain Union Market, where a “limited supply” of the pints cost $10.99 each. (It can also be ordered from the Columbus, Ohio-based creamery’s website for $12.)

So, how does it taste?

Well, the Dr. Frankenstein-like food scientists at Jeni’s have essentially re-created an everything bagel in frozen form.

The first note is nothing but silky cream cheese, which seems to melt over your palate. Hopefully, your scoop managed to capture a morsel of “bagel gravel,” which adds a pleasing, doughy texture to the mix. It’s a surprising but not-at-all-bad experience.

Much less gratifying is the pungent finish — pure garlic, salt and onions. This is where things start to get confusing.

Straightening back from your dessert bowl, it’s hard to know what just happened. Did it taste bad? No. Is the flavor familiar? Yes. Does it belong in the aforementioned dessert bowl? Maybe not. It’s a contemplative sort of treat, good for about one action-packed mouthful and not much more.

It’s an ice cream that sooner belongs in a five-star restaurant than it does in your family’s freezer awaiting your next movie night.

I can imagine a smooth quenelle of it artfully topping a sophisticated brunch platter or served as a shocking intermezzo between a savory and a sweet course. In fact, if you told me that this ice cream was the brainchild of Grant Achatz or Heston Blumenthal, rather than dear old Jeni, I would trust the news implicitly. It’s a proper masterpiece of funky molecular gastronomy.

And so I felt compelled to enjoy it in a spirit of high-minded experimentation: creating a sundae of everything bagel ice cream, raw red onion, smoky lox and capers.

The verdict: not as bad as you might think. The salmon works almost as well as it would with run-of-the-mill cream cheese and the ice cream’s savory elements added a nice kick. I cannot, however, recommend adding either red onion or capers, both of which are a gag-inducing acid attack when mixed into ice cream.

Jeni, if you are out there, I agree, your ice cream engineering is tops.

But does anybody really want to eat an ice cream that pairs well with salmon?