Home » Lifestyle » I was paid to be someone’s Christmas partner

I was paid to be someone’s Christmas partner

I received a call from a brothel asking if I could be there on December 24. I told them no, as I was spending Christmas with my children. They told me they had a client whose fantasy was to wake up on Christmas Day with someone. For the last 20 years, he had woken up alone.

Well, that was right up my alley. Still, I was spending Christmas with my kids. I did, however, ring my daughter to tell her about it. God love her, when I explained about his request and how for the last 20 years he had woken up alone on Christmas Day, no partner to share it with, and that he had never even had his kids over on Christmas, she said, "Mum, you take that job. I don't want someone taking it just for the money and not giving him the best time. I know you'll make sure he has the best Christmas." 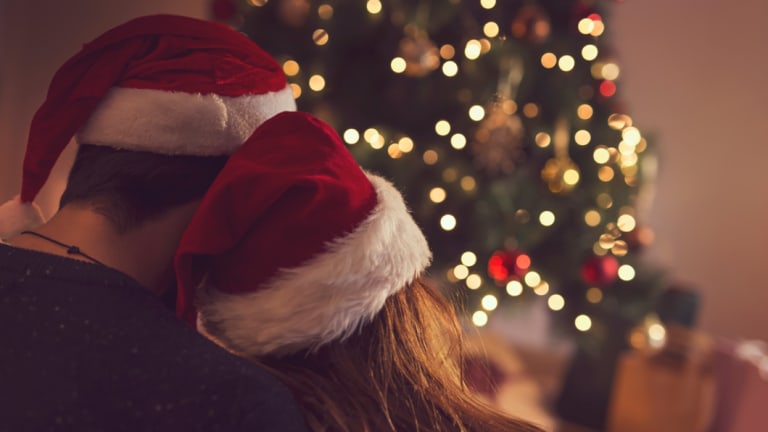 I put my arm around his waist and he gave me a smile and a squeeze. I loved my job. I loved making people happy.Credit:Shutterstock

The brothel put me in contact with the client, Bruce, so he could tell me specifically what he was after in the booking, and to see whether we were both comfortable after talking over the phone. Our initial conversation lasted for an hour.

Bruce wanted me to act like his partner by letting him hold my hand or put his arm around me in public, without me pulling away. I told him I would be fine with that.

So what do you buy a complete stranger for Christmas? As luck would have it, I found a good leather toiletry bag with nice-smelling soaps and creams. I found a little Christmas bear that repeated everything you said in the cutest voice. I also bought some chocolate-covered nuts and fruit, a large mug with cookies in it, and a couple of other bits and pieces. I was getting excited. Bring on Christmas! Some of the girls commented that I was crazy for spending money on him. They just didn't get it.

Before meeting him, I felt a rush of nerves start to come in. Apparently it wasn't just me, either; he sent a text saying he was across the road and having a beer to settle his nerves.

As I read his text, I thought, "Don't you dare change your mind after I gave up Christmas with my kids." He sent another text again at 2pm, saying he was outside. As I opened the front gate, he walked over to greet me. He was in his late 50s, the same height as me when I'm not wearing my heels, and a trendy dresser, neat and tidy.

I walked straight up to him, smiled, gave him a big hug, said how nice it was to finally meet him. A lingering smell suggested he was a heavy smoker. Bruce collected my luggage and put it in the back of the car.

He opened the door for me and, upon seating himself, said, "What a pleasant surprise. I didn't know what to expect." I patted his leg and smiled.

As we were driving, I put my arm up the back of his seat and gently tickled his neck with my fingers. Pulling up in front of the hotel reception, we climbed out, entered the building and checked in. I put my arm around his waist and he gave me a smile and a squeeze. I loved my job. I loved making people happy, and this happy chappy was going to have the best Christmas of his life.

Not long afterwards, we headed to our room, a standard studio suite with a nice bathroom, full-size bed, and the perfect table to put a Christmas tree on. I playfully said, "Look what I have." I pulled out the small Christmas tree and decorations.

He beamed, shaking his head. I held up a Christmas stocking: "I think this is for you." I could see the emotion creeping into his face. I couldn't wait for the morning to see the expression on his face when he opened his presents. He was already behaving like an excited child. He grabbed me, giving me the biggest bear hug. "Thank you, Tara."

This was what I loved; these comments and gestures were what I worked for. Bruce went to have a shower and I made use of the alone time to sort out the stocking fillers. I placed the stocking back near the Christmas tree, the stocking fillers under the bed, and his presents from me behind the curtain.

Bruce came out of the shower and asked me what I was smiling about. I looked up. "Santa comes tonight." I jumped off the bed and went for a shower, slipping the "Santa's little helper" outfit into my robe.

After I had dried myself off, I carefully put my outfit on. A cute little Santa dress, stockings, suspenders, and black heels, all covered over by my robe and tucked away out of sight.

Bruce was on the balcony. "I can't believe I still have a dozen beers left and nearly a full packet of smokes. They would usually be gone by now," he said, smiling.

"Ready to go in? I have a surprise for you," I said with a cheeky smile.

He followed me into the room and sat on the bed. Taking off my robe, I said, "I'm Santa's little helper, here to see if you're a good boy or a naughty boy." He grinned and looked shy.

Moving a step closer, I gave him a big hug, putting my hands up under his shirt and squeezing tight. He was a lovely guy and it was a pleasure to spend time with him. Bruce was a gentleman in every sense of the word.

To be honest, it was very rare to have a client who wasn't respectful or nice. Your typical Aussie blokes they were my favourites – salt of the earth, a little rough around the edges. I took a step back and lifted my Santa outfit up over my head.

"Merry Christmas, Bruce," I said, smiling. "I am the first ho of Christmas. Have you been a naughty boy?"

We spent an hour being naughty, then lay contentedly in each other's arms. What was wrong with giving someone beautiful memories and the company they craved?

You may think it was an illusion. For Bruce, it was the best time in a long time and I was so happy to be part of that. We snuggled up together, enjoying the comfort of the bed and each other.

He was telling me how lonely it got for him, and how the couple of attempts he had made with girlfriends hadn't worked out, and how he'd put it all in the "too hard" basket. He talked of his passion for cars and how he loved the time he spent with his son. We chatted away for a couple of hours before I was so tired I fell asleep.

Waking up before Bruce, I quietly filled his Christmas stocking and placed his presents under the tree. I lay there patiently waiting for him to stir. As soon as I felt movement, I sang, "Santa's been, Santa's been."

He got his bearings as I made him a cup of tea and myself a cup of coffee. "What have we got here?" he said, pulling out the items. I was so excited; I loved it. "Look," he said, holding up the large mug, "I'll only need one cup of tea with this."

"Here," I said, taking the cup. "I'll make you a tea in it." He had a massive smile on his face. I watched him as he rummaged through his Santa bag. Priceless.

By the time I brought the mug of tea over, he had everything laid out. I gave him his first present, the toiletry bag. "Merry Christmas, Bruce." His eyes grew wider and so did his smile. He shook his head. After he opened it, he said, "Out of a million things you could have got, this is what I need the most."

"Come on, there's more." I was so happy. I gave him the teddy next and said, "Merry Christmas," which the little teddy repeated in a cute voice. Bruce burst out laughing and started talking to the teddy, saying all sorts of funny things. His smile was huge, just like a kid at Christmas.

"I didn't get you anything."

"This is your Christmas, you didn't have to."

Bruce had tears welling up in his eyes as he thanked me for the best Christmas. It took him a minute or so to regain his composure before he gave me another big hug and thank you.

What a beautiful feeling. I was so proud of my kids for wanting me to do this. It meant the world to one lonely man, to give him back the love of Christmas.

This is an edited extract from Tara: Memoirs from the Boudoir by Taylor Tara (New Holland), on sale now.

This article appears in Sunday Life magazine within the Sun-Herald and the Sunday Age on sale December 2.