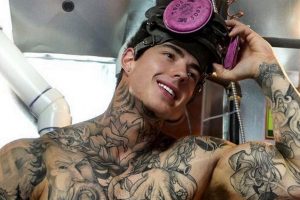 We all have our own unique preferences around our daily lives – from the food we eat to the clothes we wear.

And, every one of us feels comfortable with different things.

That’s no different when it comes to underwear, or lingerie, as we all think we look and feel our best in different designs.

Some women prefer a Brazilian brief, others French knickers and many love the ease of thongs.

But, traditionally, men have had less choice about what they wear under their clothes with the options limited to boxers or briefs.

Now, though, some men are pushing back and saying that all underwear should be available to men.

Metrosexuals – that being a man who spends a lot of time and effort on his looks – think that there should be no limits and that men can wear thongs if they want to.

One such bloke is social media influencer Jake Andrich who posed on his Instagram account wearing a thong.

Jake boasts over 500,000 followers on Instagram and more than 4million subscribers on TikTok.

He admitted that he first tried wearing women’s lingerie at the request of his girlfriend.

At first, he wasn't a big fan of wearing lady's underwear, but then he found he enjoyed the feeling.

Jake explained: “At first I didn't feel comfortable, but I soon realised that it's something that can be normal.”

“I don't think that makes me any less of a man,” he said. "If there are women who wear boxers, why can't we?”

In the photo, Jake wore a cap and not much else as he pulled down his grey tracksuit bottoms to reveal his butt and the bright blue thong he wore underneath.

The snap quickly went viral with people from around the world commenting on his unusual underwear.

“Your butt is prettier than mine”, commented one follower. “That beautiful and hot a**”, said another.

While a third added: “Daddy got some cake on him!”

“Your a** looks better than mine – now I don’t want to wear a thong no more,” a fourth joked.

Do you think men should be able to wear thongs? Tell us in the comments below…

And for more stories from the Daily Star, sign up to one of our newsletters here.