Other than going back to Florida, the one place that makes me feel at home for the holidays is Disneyland. It really is the best time to go to the most magical place on Earth. There are lights everywhere, festive foods to enjoy, and your favorite characters are dressed in their holiday best. I love Christmastime at the parks. Most of my friends with annual passes are blocked out this time of year, so I went to Disneyland by myself for the holidays, and surprisingly had the most wonderful time.

To anyone who’s never been to Disneyland, it’s easy to assume it’s a park for children. Guess what? The park is for anyone and everyone to enjoy. You’re never too old for thrill rides, delicious food, and just a casual walk in the park sightseeing and people watching. In fact, going to Disneyland alone is now one of my favorite things to do.

Don’t get me wrong: I love getting a big group of my friends together and spending the day going on everyone’s favorite rides, but that can be exhausting. Sometimes, it’s fun to just go at your own pace, and see what you want to see. When I’m at Disneyland alone, I like to eat tons of food, hit up my favorite rides, and watch the fireworks, and that’s exactly what I did.

First, I stopped by the Festival of Holidays for some Instagrammable food. 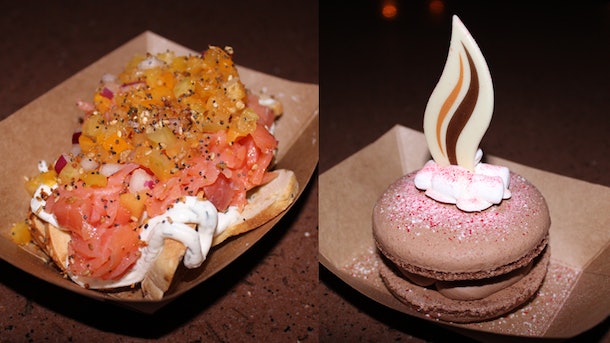 As a foodie, there’s no denying that my favorite part about the parks is the food. I even have an entire Instagram dedicated to what I eat at Disneyland, so of course my first stop was checking out all the booths at the Festival of Holidays at Disney’s California Adventure. From things like jalapeño latkes and holiday ham shanks, finding one dish to try was one of the hardest decisions ever.

However, lately, I’ve been craving an everything bagel like I used to get in NYC, so I settled on the lox-and-everything-bagel nachos at the Merry Mashups cart. I also decided to treat myself to the “hot cocoa” marshmallow macaron.

The nachos were everything I wanted, and more. Instead of chips, there were bagel chips for me to spoon out delicious bits of salmon, onions, capers, and cream cheese. (I’m hungry just remembering it!) The macaron was the definition of Instagram-worthy and very chocolaty. I ate half, and decided to save the rest for a waiting-in-line snack to eat later.

Next up: the Believe In Holiday Magic fireworks. 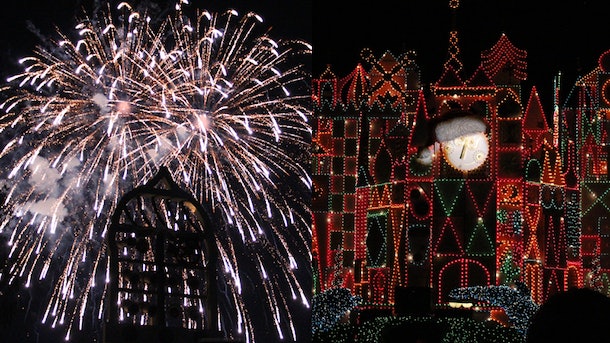 Since I arrived later in the day, I only had little time at California Adventure before the fireworks at Disneyland. So, after eating, I raced over to Disneyland to my favorite fireworks-watching spot. I know the prime spot is right in front of Sleeping Beauty Castle, but during the holidays, I prefer in front of It’s A Small World.

This time of year, the entire ride is lit up with tons of colorful Christmas lights, and it has that Disney magic everyone is talking about. You can still see the fireworks behind It’s A Small World and get all the holiday light projections as well. It’s the same show, just a change in scenery.

The Believe In Holiday Magic show does not disappoint. With all the classic holiday music playing, you’ll feel like an excited kid again waking up early on Christmas morning. After the fireworks, there’s a surprise snowfall that you’ll want to dance around in. Of course, a few Instagram story videos and boomerangs were a must.

I walked around taking in all the holiday décor. 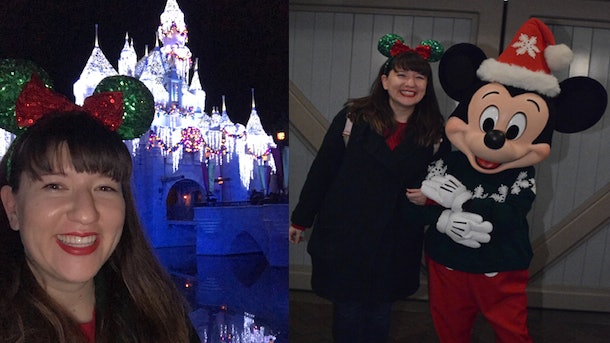 I’m a huge sucker for Christmas lights. They really give me all of the holiday feels. Walking around the Disneyland parks looking at holiday decorations is pretty much what I did for the rest of my night.

If you have to see one thing at Disneyland for the holidays, it is Sleeping Beauty’s Castle at night. With white lights all over, it looks as though Tinker Bell sprinkled a bunch of pixie dust on top of the castle. If you’re in the parks alone, no need to fret about asking a stranger to get a pic of you in front of the castle. There are Disney PhotoPass photographers there to take some Insta-worthy snaps. I also opted for a selfie off to the side of the castle to avoid tons of foot traffic.

Another picture I couldn’t pass up was a snap with the main mouse himself, Mickey. As you enter the park, the fab five of Mickey, Minnie, Pluto, Goofy, and Donald are all hanging out on Main Street, U.S.A. wearing their holiday outfits for photo ops. With my sparkly holiday ears on, I, obviously, had to get a pic with Mickey in his green sweater and Santa hat for the ‘Gram. Also, seeing a familiar face reminded me that I’m never truly alone at Disney, and that’s probably the most magical thing of all.