Like pancakes? Like not paying for stuff? IHOP is ready to hook you up. Tuesday, March 12 is Free Pancake Day at IHOP. Obviously, this means free pancakes, but the day is also for a good cause.

At IHOP’s Free Pancake Day – Flip It Forward For Kids, the restaurant will give away one free short stack of buttermilk pancakes per customer. The deal is available from at least 7 a.m. to 7 p.m., but until 10 p.m. at some restaurants. (Check your local IHOP to ensure participation and hours.) Free Pancake Day supports the Children’s Miracle Network Hospitals, The Leukemia & Lymphoma Society, and the Shriners Hospitals for Children. Basically, the pancakes are free, but visitors can give a donation while they’re at the restaurant to benefit the charities. Donations can also be made at IHOP restaurants throughout the month of March. IHOP’s goal this year is $4 million.

In addition to Free Pancake Day, in support of the charities there is a special pancake recipe created by a six-year-old. The result is… well, exactly as you might expect from a six-year-old: VERY sweet.

Each year, IHOP holds a Kid Chef competition, which involves contestants between the ages of six and 16, who are being treated at a Children’s Miracle Network Hospital. The winner this year was a six-year-old named Brody Simoncini. 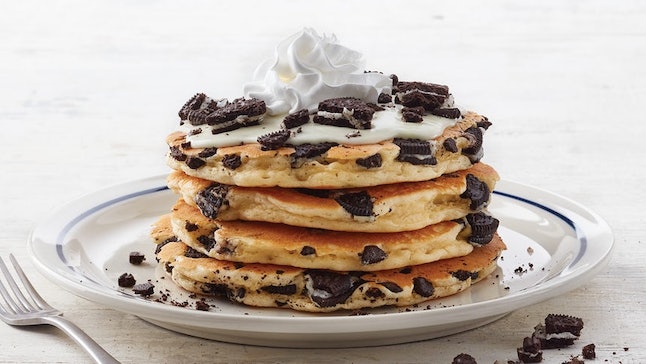 Simoncini was born with Giant Omphalocele, which caused some of his organs to be on the outside of his body. He’s gone through many surgeries at such a young age and is now doing much better. According to the Children’s Miracle Network Hospitals site, "He is an active first grader and plays flag football, baseball and basketball. He also loves elephants, to dance, make people laugh and spend time with his brother and cousins." And, no surprise, Oreos are his favorite cookie. Simoncini’s full story is available on the Children’s Miracle Network Hospitals site here.

There were also two other Kid Chef finalists. Eight-year-old Nellie Mainor created PaNellie Unicorn Pancakes, "a stack of multi-colored buttermilk pancakes topped with whipped cream and lots of sprinkles and a unicorn face made with strawberries for the ears, blueberries for the eyes, and an ice cream cone for the horn." Coleman Giles, 15, came up with The Hawaiian Luau, pancakes with bananas baked into them, topped with a grilled pineapple ring, shredded coconut, whipped topping, a cherry, and his Grandpa Bob’s vanilla syrup.

While Mainor and Giles’ pancakes are unfortunately not available at IHOP, maybe their recipes will inspire some at-home creations. And if you want to check out Simoncini’s recipe, get going.